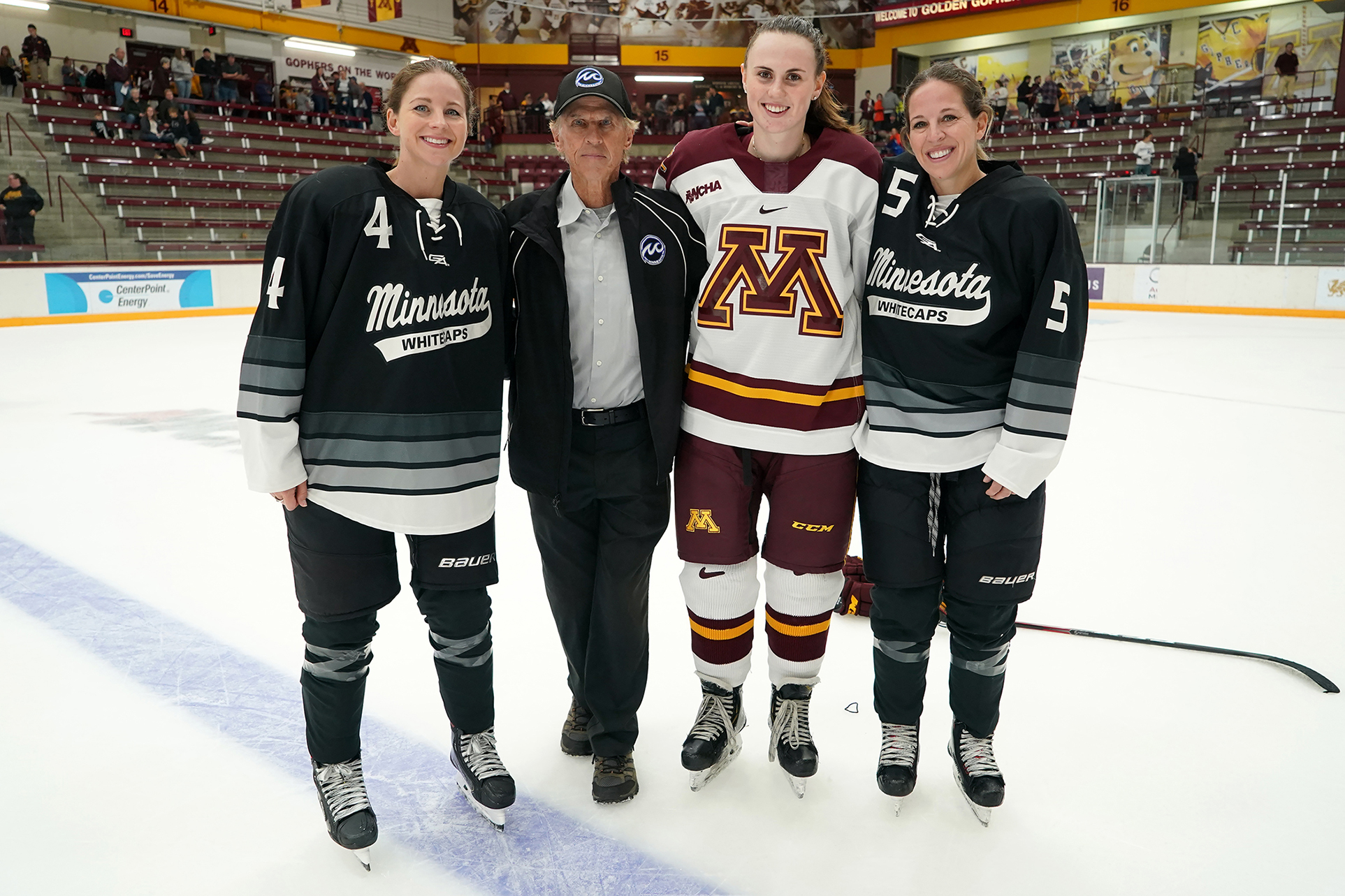 MINNEAPOLIS — On any given summer Sunday afternoon families across Minnesota and beyond will gather in organized reunions, catching up on each other’s lives over pulled pork sandwiches, potato salad and green bean casserole. In many cases friendly, and not so friendly, competitions ritually ensue on the softball field, at a volleyball net or over an intense Cornhole tournament.

University of Minnesota freshman defender Maddie Wethington’s family on the other hand — at least for one Sunday — took their battle to the ice. 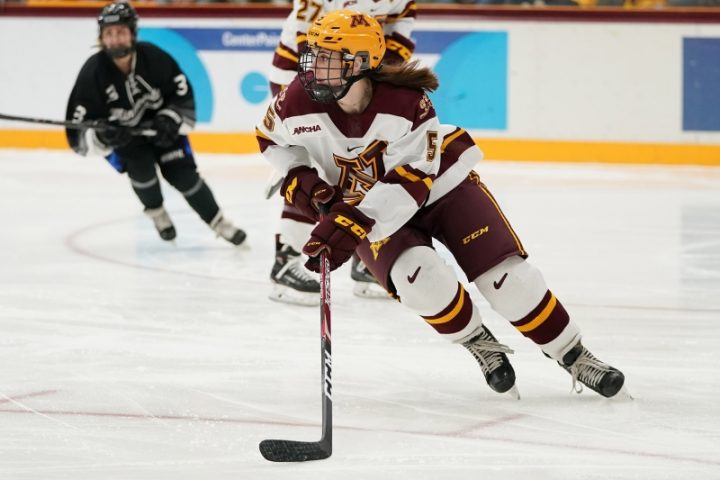 Wethington stepped onto the Ridder Arena ice for Sunday afternoon’s exhibition game against the National Women’s Hockey League’s Minnesota Whitecaps with much more on the line than her Gopher teammates. As she surveyed the defending Isobel Cup champions as they warmed up, Wethington exchanged glances with two of her aunts, former Gophers Winny (Brodt) Brown and Chelsey (Brodt) Rosenthal, while her grandfather, Jack Brodt, watched from behind the visitor’s bench.

After the game, a visibly emotional Wethington looked toward her cousins Jack and Haley, Chelsey’s children, playing nearby and said, “I was these kids’ age, like five and under, when I got to watch them put on the ‘M.’ To be able to get to do that and then also play against them is something that’s really unbelievable and I will cherish for the rest of my life.”

Wethington, a six-time letter winner in both hockey and golf at The Blake School in Minneapolis, is a member of Minnesota’s most famous women’s hockey family. Her mother, Kerry, the first Division I women’s hockey head coach at St. Cloud State (1998-2002), is Winny and Chelsey’s sister and another of Jack’s daughters.

All three women play defense so opportunities for 1-on-1 battles were scarce on this day but that doesn’t mean there wasn’t any on-ice interaction. Rosenthal’s moment came as the teams were warming up.

“I gave her a little tap on the shins as we were both at center ice,” Rosenthal said. “Didn’t really say much but just gave her a look like ‘good luck.’”

Wethington said it really set in for her what the game meant when she locked eyes with Brown on a faceoff and was met with an ear-to-ear grin. 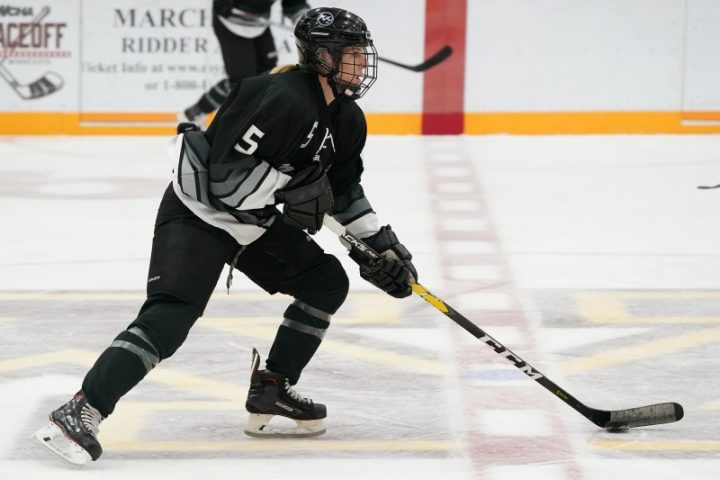 “I was smiling across the way, you know, when we were on the faceoff draw but we’re very competitive too,” said Brown, Minnesota’s first Ms. Hockey winner in 1996. “In our family, it’s competing all the time whether it’s on the ice or checkers, or you know, getting shotgun in the car. I think it’s kind of a culture that probably my parents have created that has kind of been passed on to my sister Kerry and her daughters.”

In addition, Wethington has competed internationally for several U.S. Under-18 teams and, not surprisingly, has played club hockey since 2012 for the Minnesota Junior Whitecaps. While it is been an honor to wear those colors, nothing compares to the realization of Wethington’s childhood dream of donning the maroon and gold sweater with the ‘M’ across the front and No. 5 on the back.

The number is significant in that she wears it in honor of her aunts who both wore it as Gophers, Brown from 1998-2000 and Rosenthal from 2002-06. That Wethington got to wear it as a freshman she says is a matter of the stars aligning for her.

“I realized that the defenseman that was leaving (Sophie Skarzynski) was number five,” Wethington said. “So it just happened to work out perfectly.”

The number choice is an emotional one for Brown and Rosenthal as well.

“Both me and Chelsey are honored that, you know, she respects us enough to want to carry on that number and represent the Gophers with it,” Brown said. “It’s pretty special.” 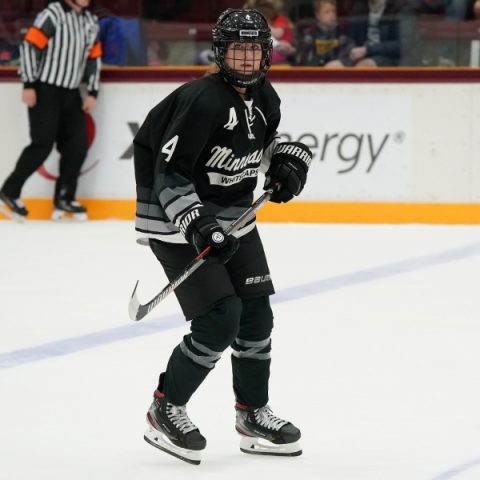 “It was very cool to see her wearing in the ‘M’ and she’s worked so hard, Rosenthal said. “I remember her being in a stroller and now I’m playing against her so that kind of just says a lot how … I’m getting old.”

Wethington said she believed Sunday’s game was the first time her grandfather had coached against her but the day’s events conjured up fond memories of coaching alongside him as a young girl.

“I remember growing up he would coach some of their WHAM (Women’s Hockey Association of Minnesota) league (games) with my mom even playing and and I’d be on the bench with him pretending to coach when I was five years old,” Wethington recalled with a smile. “At the end of last season, my senior year, he was like, ‘Just wait, I’ll have all these players on you forechecking you so hard.’ He was looking forward to it; I was looking forward to it; it was a great moment for my whole family.”

Brodt, who played hockey at Hamline University and co-founded the Whitecaps in 2004, said the game was a proud grandparent moment and he is confident Wethington will make her own mark at the University of Minnesota.

“My granddaughter is a good player and she’s been wanting to play against her aunts so it was fun,” Brodt said. “It wasn’t exactly the way we wanted it to turn out but, it is what it is.”

It turned out to be a 5-1 Gopher win which saw them outshoot the Whitecaps 57-12, despite trailing 1-0 after one period on Jonna Curtis’ buzzer-beater. The Gophers proceeded to reel off five unanswered goals — led by Taylor Heise’s three-point effort (2-1—3) and a goal and an assist from Grace Zumwinkle — to overwhelm their guests.

To be fair, the Whitecaps had practiced only twice and a labor dispute has them, and every other NWHL team, playing with a significantly depleted roster compared to the one fans celebrated with on the ice in March. 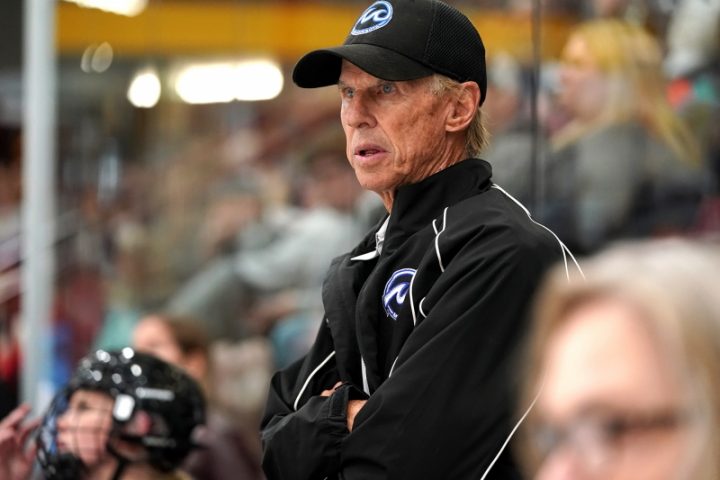 “It’s always fun to play the Gophers,” Brodt said. “We didn’t give them much of a test but when we originally scheduled, we figured we were going to have all our players. We’ve only had one and a half practices. They’ve been practicing for two or three weeks so you can see that we were slow to all the pucks. They just took it to us and I kind of figured that that’s what they were going to do.”

To the Gophers’ credit, they took full advantage of the opportunity and Wethington even got on the score sheet, chipping in an assist on Zumwinkle’s game-tying goal in the second period. But that was secondary to the win in Wethington’s eyes.

“I think I got a little bit of an advantage at the table when it comes to Thanksgiving and Christmas,” Wethington said with a competitor’s grin. “But I’ll try not to rub it into their face too much.”