With Suter Out, D Steps It Up 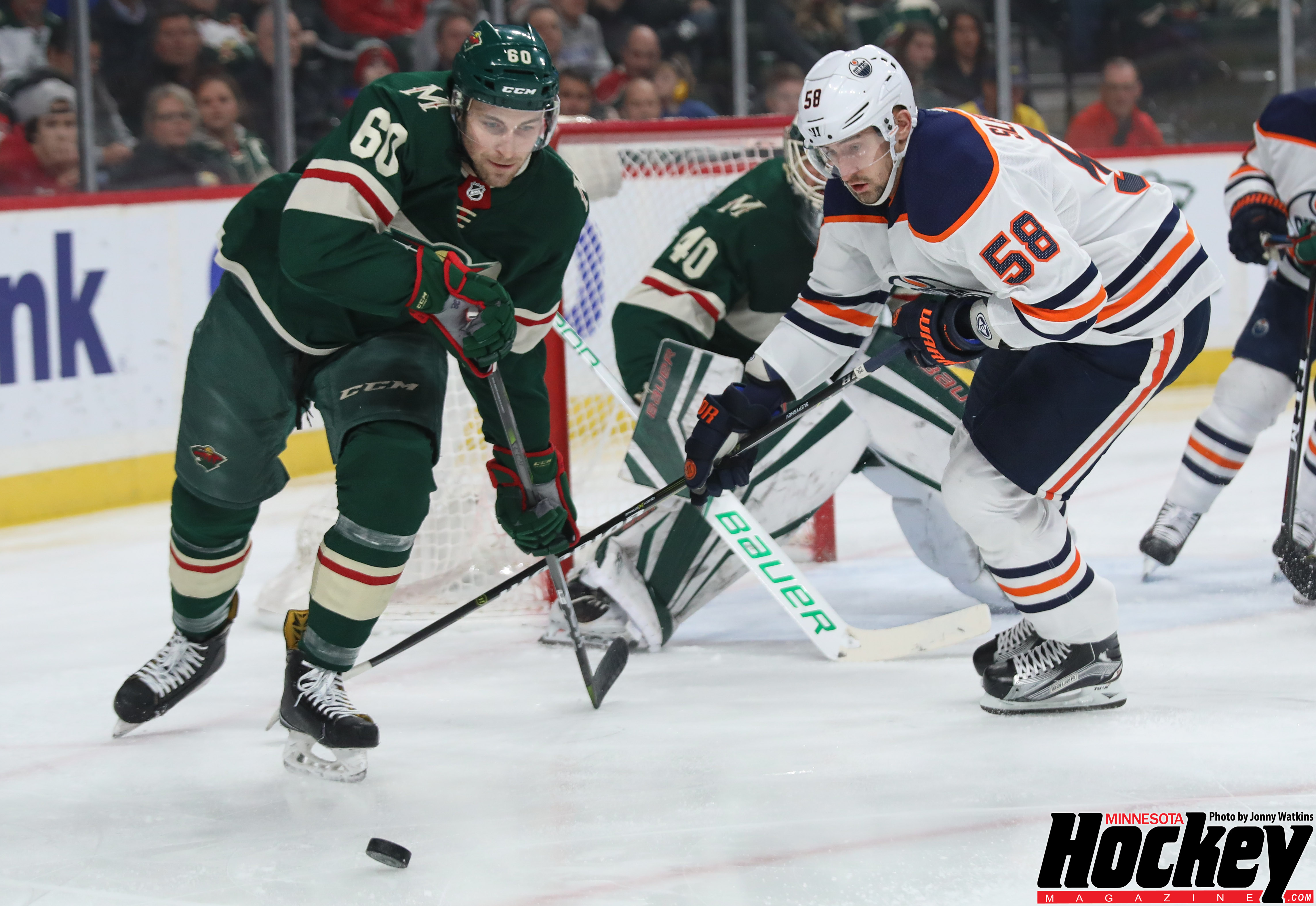 Former UMD defenseman Carson Soucy made his NHL debut for the Wild on Monday night. The rookie tallied three shots and two hits in 15:26 of ice time in Minnesota’s 3-0 win over the Edmonton Oilers at Xcel Energy Center. (MHM Photo / Jonny Watkins)

St. Paul – Life without Ryan Suter officially began for the Wild Monday night in their final home game of the regular season.

Suter, Minnesota’s premier defenseman, is scheduled to undergo surgery to repair a broken fibula in his right leg and is finished for the remainder of the team’s play in 2017-18, the Wild announced Monday.

“I just feel really bad for him,” Wild coach Bruce Boudreau said. “He’s a guy that’s been pretty durable his whole life, so it’s probably pretty depressing for him. We just want him to get better.”

Suter’s absence didn’t seem to bother the Wild much Monday as they defeated the sagging Edmonton Oilers 3-0 in front of 19,189 at the Xcel Energy Center.

The unfortunate news going forward is that Minnesota won’t have the benefit of playing the lackluster Oilers in postseason play, but that might be countered by Boudreau’s announcement earlier in the day that defenseman Jared Spurgeon will be back by then, if not before. 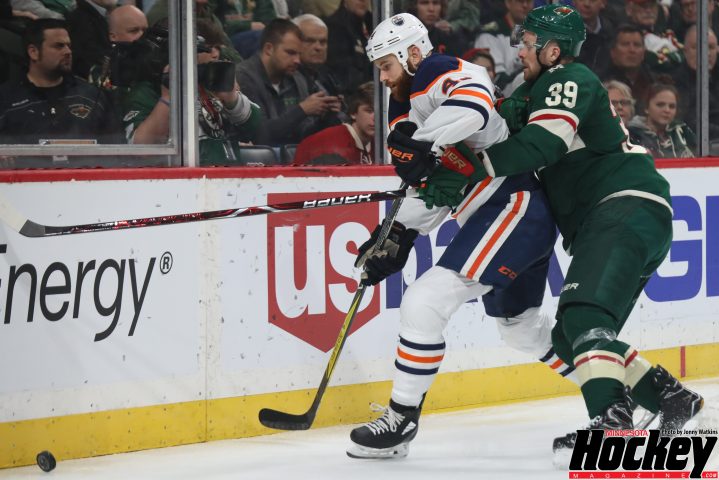 Nate Prosser and the Wild’s defensive corps made it a long night for Edmonton forwards on Monday. (MHM photo / Jonny Watkins)

Suter spearheads Minnesota’s blue line for every occasion — especially with Spurgeon sidelined since March 13 with a torn hamstring — but Jonas Brodin, Matt Dumba and Ryan Murphy joined Prosser, Seeler and Soucy for a solid performance against Edmonton.

The play of the six D-men made it a good night for goaltender Devan Dubnyk, who stopped 22 shots to post his 29th career shutout and fifth this season.

“I don’t think I saw one mistake out there,” Dubnyk said.

Boudreau, too, was smiling when it was over.

“Our defense was good tonight,” he said.

Soucy, who was playing for UMD in the Frozen Four a year ago, stepped in with a flawless performance.

Soucy, who had three shots on goal and two hits in 15 minutes, 26 seconds of playing time, said it was a relief to step on the ice for the first time in an NHL game and he looked to the leadership of Minnesota’s current top pair: Brodin and Dumba.

“Brods and Dumba played great tonight and they’re going to take a load, which they did,” Soucy said. “I hope a couple of us others can get the minutes we can and just make it easier for them.”

Brodin, who was on the ice for more than 24 minutes, said Minnesota’s blue line contingent has work to do without Suter, but he voiced confidence that those manning the position will do fine.

“We’ll see when Spurg is back,” he said, “but yeah, right now we have the D we have and I think we played good today.”

The Wild outshot the Oilers 40-22 and controlled play throughout.

Their offense was fueled by another Minnesotan as Bloomington’s Zach Parise scored a goal in each of the first two periods to give him 12 goals and 16 points in his past 17 games.

“All around it was a pretty good game for us,” Parise said. “Our defensemen did a good job. Ryan’s a tough guy to replace, but I thought they did a good job all over the ice.”