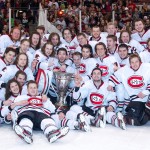 After winning its first-ever MacNaughton Cup last year the St. Cloud State Huskies would normally be opening the 2013-14 season as defending conference champions for the first time in its Division I history. But this is no ordinary season and the National Collegiate Hockey Conference, the Huskies’ shiny new home league, has no title for anyone to defend.

That’s of no concern, however, to a St. Cloud State team for which league championships are now merely a stepping stone after also getting its first taste of the Frozen Four in 2013. Although the Huskies fell behind by two goals in the first 5:07 and never recovered in a 4-1 loss to Quinnipiac in the national semifinals six months ago, the experience remains fresh in their minds and a spring business trip to Philadelphia, site of the 2014 Frozen Four, is on this season’s agenda.

“We’re sure disappointed in how we played, especially those first five minutes in that game Pittsburgh,” St. Cloud State coach Bob Motzko said. “But when you sit back, it was a mature group of kids that came together and had a terrific season.”

St. Cloud State indeed had a terrific season and is extremely proud of its WCHA regular-season title, an honor the Huskies shared with Minnesota in the final season for both teams in that league. The 2012-13 season will forever hold a special place in the hearts of St. Cloud State fans, players, and coaches.

“To get the first McNaughton Cup for our school was awful special,” Motzko said. “St. Cloud’s been close on a handful of occasions, but to win that MacNaughton Cup and celebrate with the fans was a special moment.”

This season, though, marks the dawning of a new age in college hockey with two new conferences, one defunct league and several schools changing their conference allegiances. With the NCHC consisting of six of the top nine in last season’s WCHA standings and two of the top three in the now-deceased CCHA, there will be no nights off. Motzko, however, is not convinced the difference will be noticeable in the regular season.

“We had an awful strong league in the WCHA where you saw so much of that ugly word people don’t like to use: parity,” Motzko said. “You saw so little separation between six or seven teams and that’s what we’re going to see (in the NCHC).”

On the other hand, Motzko says it will be in the postseason where the true measure of the NCHC’s strength will be seen and seeding will be a poor indicator of which teams will actually advance.

“We’re going to be a playoff league,” Motzko said. “You’re going to be having to play your best hockey at the end of the year and that’s true hockey at its best. There are going to be no easy rides come playoff time so we want to use our season to make our team better and be ready to go at the end.”

This time around, the Huskies will have to be ready without the likes of Hobey Baker Award winner, Drew LeBlanc, power-forward Ben Hanowski and the skilled and steady Nick Jensen on defense. But this is hardly a rebuilding year for St. Cloud State which returns more than one hundred goals from last season, a pair of leaders on defense and its starting goaltender.

Motzko, nevertheless, has yet to be convinced that production can be sustained without his departed stars.

“We have 107 goals returning, which is a lot of offense, but I still think Drew LeBlanc and Hanowski were a big part of helping set up and helping create a lot of space for a lot of that offense,” Motzko said. “It was the great performances by our senior leaders that paved the way so our young guys and some guys like Nic Dowd could emerge.”

That means players like Dowd, Jonny Brodzinski and Kalle Kosilla will have to demonstrate their ability to produce on their own and create that space for others to contribute and share the offensive burden. Players like David Morley and Joey Benik would certainly fit that bill.

Morley scored 11 goals as a sophomore after missing nearly a year and a half with concussion symptoms while. Benik, on the other hand, broke his leg in last season’s first practice and struggled initially with his conditioning upon his return before exploding for six points (5-1–6) in four postseason games.

“Morley had a very solid freshman year but this offseason was the first in two years he could train and he looks like a completely different player for us, on the good side,” Motzko said. “Benik had a tremendous offseason; he’s looked great in practice and we’re excited to see if he can take that step as more of a leader for us.”

“I think everyone knows he can put pucks in the back of the net,” Dowd said of Benik. “But at the same time it’s going to be a learning experience along the way, he’s going to be one of our top guys, and he’s going to have to learn how to play a two-way game.”

Even if the Huskies cannot meet last season’s scoring pace, they should be able to put enough points on the board to be successful so that won’t be Motzko’s primary concern.

“The big key for us is our [defensive] corps because that is such a main cog,” Motzko said. “I think that’s the area we feel needs the most attention and has to take the biggest strides.”

In two seasons alongside Jensen, sophomore defenseman Andrew Prochno has racked up 57 points (10-47–57) and Motzko feels he unfairly gets overlooked when preseason honors are handed out.  Without Jensen, Prochno will be expected to step into that leadership role offensively.

“We have to find a new [partner] for him and that might mean breaking up another tandem,” Motzko said. “So the dynamics of our [defensive] corps are going to change. The pieces are there; we’re going to have to put them together.”

St. Cloud State’s goaltending is in capable hands with Ryan Faragher, a steady and often spectacular performer who has played 63 games already in his two seasons as a Husky. But Motzko says freshman Charlie Lindgren will get playing time and hopes the internal competition Lindgren provides will push Faragher to further elevate his game.

Dowd believes the competition with benefit both goaltenders and that Faragher is more than up to the challenge.

“This could be the year where Ryan steps up and is one of the goaltenders that’s talked about around the country,” Dowd said. “From my standpoint, I honestly believe he’s one of the best goaltenders in the entire nation.”

Dowd acknowledges the star power the Huskies lost in the offseason but feels his team has the puzzle pieces to fill the voids and remain successful.

“There’s not going to be another Nick Jensen or Drew LeBlanc or Ben Hanowski, we’re not going to fill those roles specifically,” Dowd said. “But with the combination of guys on our team and the culture we’ve created in our locker room I think we’re going to have a good season and, hopefully, pick up right where we left off.”

Why the Huskies will exceed expectations: A potentially potent offense lives up to its billing and keeps the Huskies playing from ahead which will take some pressure off of a developing defensive corps while Ryan Faragher emerges as an elite goaltender.

Why the Huskies will fall short of expectations: An inability to fill even a portion of the voids left behind by LeBlanc, Hanowski and Jensen offensively and the failure of the defense to adapt to the rigors of a challenging NCHC schedule in which there will be little room for error.