Controlling gaps is essential to defensive play and puck recovery 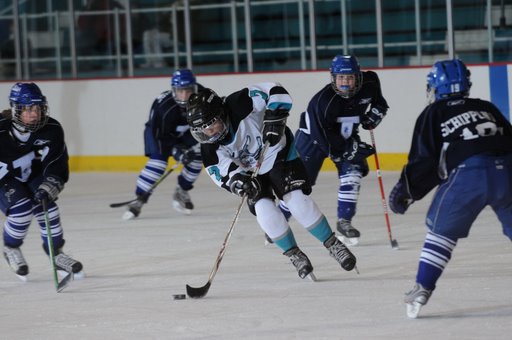 Controlling gaps is essential to defensive play and puck recovery

The concept of gap control is very important for coaches and players to understand so that they have a common knowledge base when discussing individual situations that occur during games. In a broad sense gap control can be defined as the “distance to the nearest opponent.”

The easiest example of gap control occurs on a 1 on 1 situation with the puck carrier approaching a defenseman during an offensive rush. Coaches preach tight gaps to their players and defend the blue line. In practice youth hockey players have a very hard time maintaining a close/tight gap in the neutral ice area and typically will attempt to move to a zero gap when the play reaches a critical point in the scoring area on front of their own net.

A tight gap often is described as one to one and half sticks lengths from the puck carrier. How often do we see it in youth hockey? Not very often because the defenders lack confidence in their skating ability and are afraid they will get beat and then criticized by teammates, coaches and parents.

In reality, playing a tight gap in neutral is more desirable than retreating deep into the defensive zone and getting beat close to the net. If a defender gets beat at the center red line there is plenty of time and space for teammates to fill in up and the mere act of playing a tight gap sooner will slow the opponents attack allowing for more support from the defending team players. Coaches should think about encouraging tight gaps in the neutral zone area and make sure all players know that turnovers are more likely to occur and counter attacks will come quicker.

To be fair to defensemen, they do need to decide if they have a “contain or force” situation to deal with. In a contain scenario, with little or no support or if they are facing an odd man rush, larger gaps are warranted and the main objective is to protect the middle lanes and steer the play to the outside. If support is present a force situation presents itself and the defender can move to zero gap as quickly as possible to create a turnover.

The puck carrier/defender scenario is the most common thought of gap control situation but it is also necessary to expand the concept to scenarios all over the ice. We want zero gap in front of the net most of the time. Supporting forwards should be thinking about tight gaps in their own end of the rink until possession of the puck is regained. Then the other team should be thinking about tight gaps.

A back checking forward should be thinking about his gap with the opposing player and should try to get defensive side positioning with close to a zero gap. Cycling is designed to create gap and defenders can break the cycle by staying with their opponent on a tight gap.

With the speed of today’s game and lengthy periods of play without stoppage in play it is essential that as players transition from offense to defense and they maintain good gap control when the other team has possession of the puck.

Gap control applies all over the rink and is an essential part of defending and recovering possession of the puck in order to initiate an offensive play. Discuss the concepts with your team and give them permission to run tight gaps and force the play earlier. They will make mistakes but they will quickly learn how effective tight gaps can be.

A good example of all over gap control is evident when watching the Minnesota Wild and other NHL teams. Gap control is an essential element in playing defensively while trying to regain possession of the puck. When someone makes a mistake in this area you will see how it impacts the offense and creates opportunities. Talk to you players about gap control all over the rink.