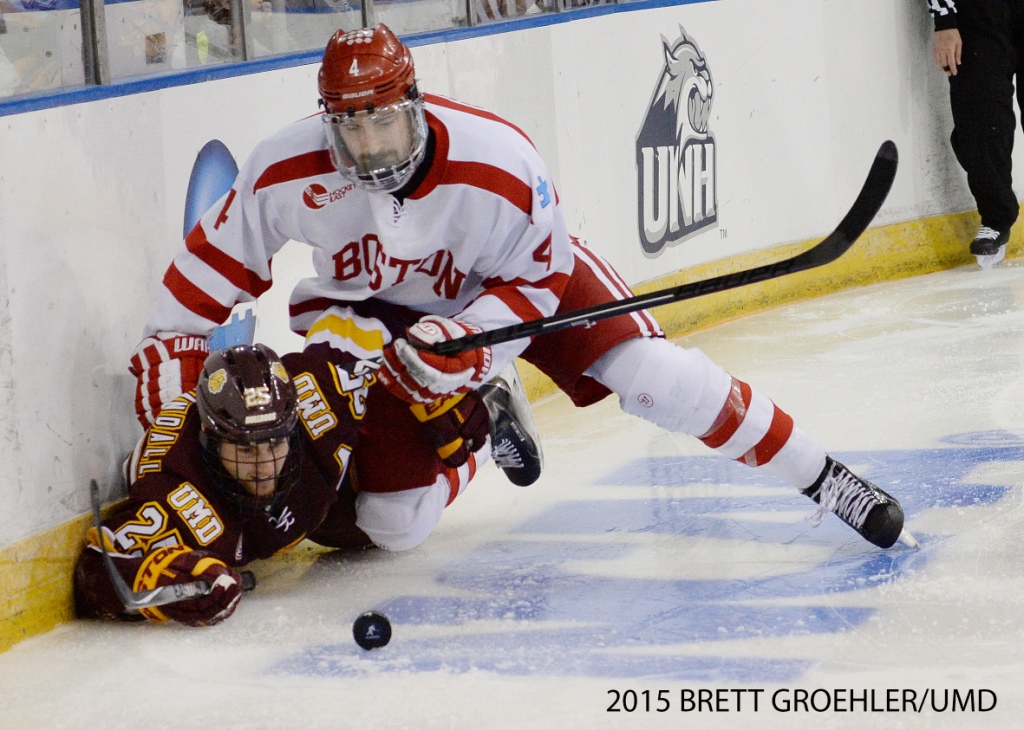 Boston University’s Evan Rodrigues scored the deciding goal at 2:24 of the third period to give the Terriers a 3-2 NCAA Northeast Regional final win over Minnesota-Duluth on Saturday night in Manchester, N.H. sending the Terriers to their 22nd Frozen Four appearance

Rodrigues scored BU’s first and third goals, with the game winner coming on a nifty toe-drag to beat almost everybody on the ice during the Terriers’ second power-play of the game.

In an extremely close and exciting contest, Andy Welinski wrapped his stick around a BU player, taking him out in the defensive zone corner and putting BU up a man early in the third. Minnesota-Duluth coach Scott Sandelin said he was surprised by the call.

“There are things you can’t control, all we can control is trying to kill it, we almost did and they ended up making a great play and scoring the winning goal,” Sandelin said. “It’s frustrating sometimes but just trying to get our guys focused on the penalty and we almost did.”

The game, in its entirety, was a chess match between two fairly equal teams with back-and-forth possessions and goals.

“I wasn’t surprised how that game unfolded. It was kind of like a heavyweight fight” Boston University coach David Quinn said. “We controlled the first few rounds, almost had a couple of opportunities to deliver a knockout punch. Then they’d come back and dominate for about 10 or 12 minutes.

The Terriers twice took the lead at 1-0 and 2-1 before finally ending Duluth’s season 3-2.

“It’s something that he’s done quite a lot over his four years here,” Grzelcyk said. “As soon as I passed it to him, I wanted him to shoot because he seemed to be wide open, but he made a great play and just a great shot after that.”

Rodrigues’ first goal occurred when Duluth failed to clear the zone and Brandon Fortunato intercepted the puck on the blue-line. Fortunato passed it Rodrigues, who was all alone at center ice, and he whipped around and golfed a no-look shot past Kasimir Kaskisuo.

“At the end of practice we play games where we bat pucks up in the air and just start whacking them” said Rodrigues, “So I kind of knew I had a beat on it and I’d make contact.”

UMD had its own unconventional goal when Kyle Osterberg lobbed the puck into the Terrier zone and Matt O’Connor tried to just stab the puck away. Simultaneously Jared Thomas was crashing the net and the puck just trickled in through O’Connor’s five-hole. Thomas took several whacks at the sliding puck but its own momentum took it across the line. That goal tied the game at two goals apiece.

“After two periods you’ve got a 2-2 tie and then I thought that we did what we do best,” Quinn said. “I thought we played a great third period. We were relentless. We were smart. And we just did the things we needed to do to win an incredibly important hockey game and extend our season.”

After beating Michigan 3-2 in overtime to take the national title in 2011, UMD has twice made it to the regional final game, only to lose to Boston College in 2012 and Saturday to Boston University. This was the first meeting between the Terriers and the Bulldogs since 1999 – an 8-5 Duluth victory.

“It was a great hockey game, just unfortunate the way it ended,” Sandelin said. “Hats off to them … a lot of back and forth, zone time for both teams in certain situations but they made a play at the end, right at the end of the power play, won a hockey game … they’re moving on and we’re not.”

“It’s obviously pretty cool,” Grzelcyk said of playing at home in Boston. ”I think I’d be just as excited if the Frozen Four were anywhere else. Obviously, we’ve had a pretty good amount of success at the Garden so it’ll be nice to get back on familiar ice. I’m sure the guys will be excited to be back in the environment.”