Minnesota State reflects on a season of success despite agonizing finish 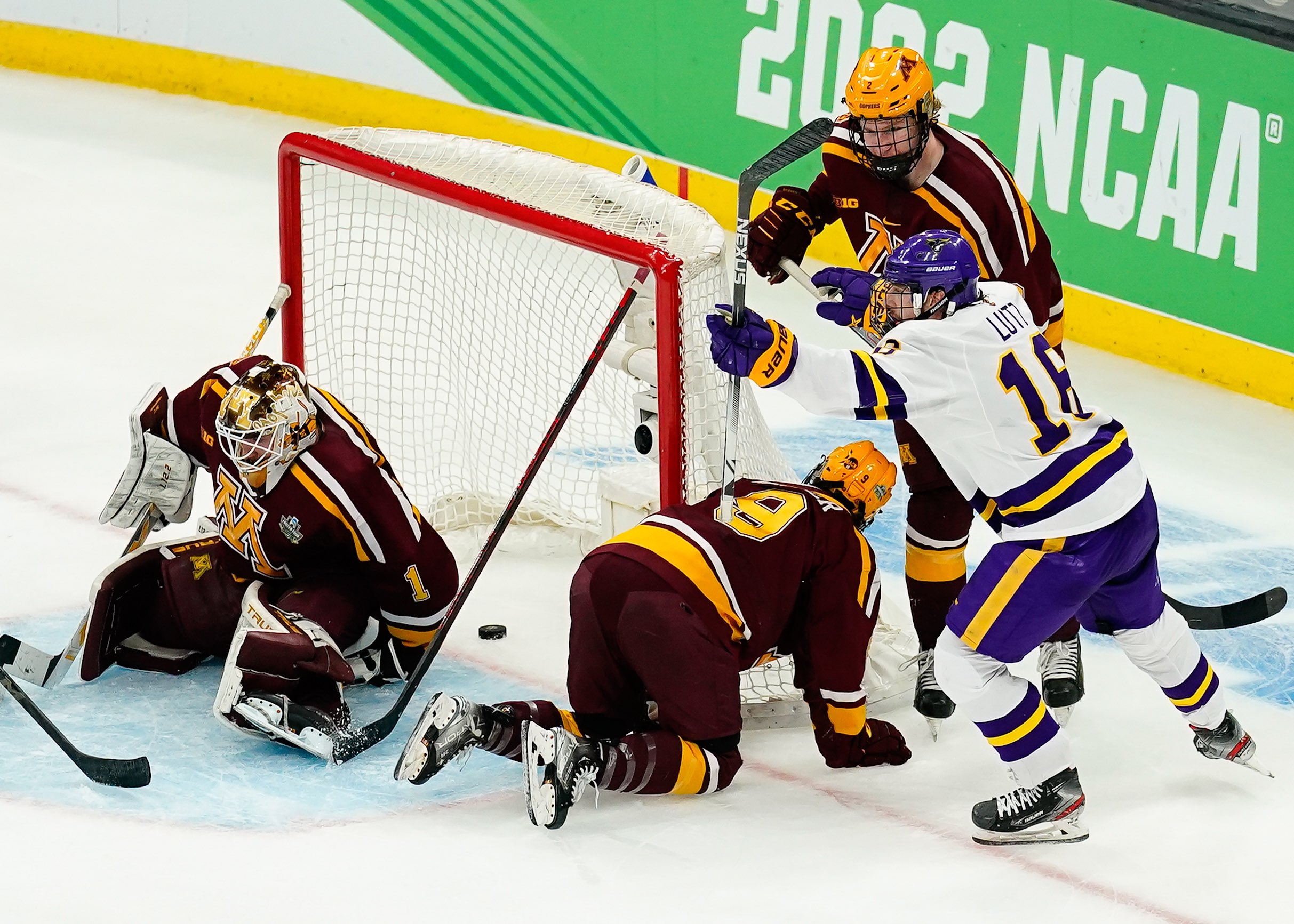 Minnesota State's Reggie Lutz celebrates his wraparound goal that became the eventual game winner in the Mavericks' 5-1 win over Minnesota in their April 7 national semifinal meeting at the Frozen Four in Boston. (Photo courtesy of Mansoor Ahmad).

BOSTON- A perfect wraparound goal comes out of nowhere. Starting behind the net, taking advantage of an opening in a moment of opportunity. It is a quick move which seemingly takes a second to change the course of a game.

Yet in reality, successfully mastering the move is the result of months and years of work behind the scenes.

For Minnesota State fifth-year senior forward Reggie Lutz, scoring a go-ahead wraparound goal in the Frozen Four against Minnesota is a move that he has been practicing on since the age of five when the Elk River native received a special incentive.

“Every time I would score a wraparound goal, my Dad would take me to McDonald’s, and I’d get a Happy Meal. I’ve been working on one for a while and it was pretty cool to see it work on the big stage,” he said after the Mavericks defeated Minnesota 5-1 in the Frozen Four semifinals. “It was able to pay off tonight, so it was pretty cool.”

Working for years behind the scenes is Minnesota State’s M.O. 41 NHL Draft picks descended to Boston from the Frozen Four teams. Only one, Nathan Smith, came from the Mavericks.

It did not matter to the only program to make a repeat Frozen Four appearance, as thousands of fans came from Mankato, Minnesota, and points elsewhere to cheer, to high-five, and enjoy a program-high against three of the sport’s traditional bluebloods. Thousands lined the TD Garden red carpet for both the April 7 semifinal and the April 9 championship game.

“We’re still building,” said Mike Hastings, who found his wife in the crowd before Thursday’s game. “Pretty special to be a part of it and to have the people travel that distance, spend the time away from work.

“We had some students hop on flights. I’m not sure where the pay came from, but they hopped on some flights out here to support us.” 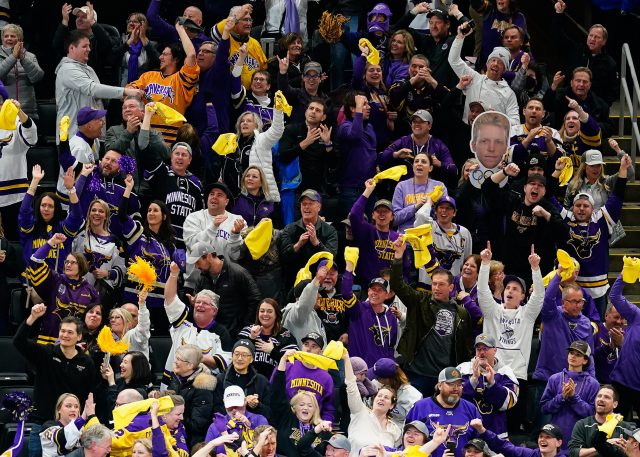 Lutz’s path to the Mavericks from Elk River included stops in Fairbanks and Chicago. The 25-year-old’s road to college is the norm for Minnesota State, who had one player debut before their 20th birthday. Burnsville’s Cade Borchardt won a USHL Clark Cup after high school, the culmination of three different teams in three years. Smith played high school hockey in Florida.

Even Hastings, celebrating his 10th anniversary being hired as Minnesota State’s head coach, has come a long way from an early season series against Denver where the Pioneers swept his Mavericks in Mankato.

“You learn from the hard things. That was a hard weekend. I remember it vividly,” he said. “I thought we played well that weekend, and we didn’t get a point.”

That Mavericks team eventually made the NCAA Tournament, as did another six under Hastings. When Minnesota State broke through to make it to the Frozen Four in 2021, Borchardt said that he took in the moment, remembering the ones that got him there, before his latest.

In its second Frozen Four appearance, Minnesota State, who began the season sweeping the defending national champions in Massachusetts, made the most of its recent experience in comparison to Minnesota, Michigan, and Denver.

Relaxed, screaming, and happy pregame, the Mavericks players embraced their “we before me” team mantra. The group became one, utilizing its suffocating defense against one of the nation’s top offenses and dispatching Minnesota despite trailing 1-0.

McKay gave up a goal on the first shot he saw of the weekend on a 2-on-0. He did not give up another until the third period of the national championship game. Before Lutz, Benton Maass scored a wraparound goal.

“I think it’s right when you step foot on campus. Ever since Coach has been here in Mankato, he’s built a great culture of family, team first,” Lutz said. “Anything that gets thrown our way, you’re going to put our team first. We don’t have one selfish guy on our team.”

The same team that collectively learned from the hard things and took the long path to college quickly became a perennial national title contender. Walking around Boston was a fanbase, dressed in purple suits, Revolutionary War outfits, and the more traditional Mavericks sweaters, ready for a championship. They had been on the road from Day 1.

Facing the same Denver program Hastings learned from a decade prior, Minnesota State spent 45 minutes keeping the nation’s top offense in neutral. The Pioneers had 4 shots on goal in the national championship game’s first half before finding the back of the net.

Once Denver did, the lessons resumed. A 1-0 third period lead quickly wrapped around into a 5-1 defeat for the Mavericks and the first loss in 19 games. The rainbow that was over TD Garden pregame disappeared.

“You look at the whole season. We hadn’t lost a game since around Christmas until tonight,” Borchardt said after the championship game. “I mean, obviously nothing’s going to solve this or make us happy right now. So I am proud of everyone, proud of the seniors. It stings.”

Boston was a special place for Minnesota State, who continues to present a difficult puzzle for any team to solve. It is a program long past the point of Providence, Palmquist being pushed, NCAA first rounds, and being a surprise national title contender.

In a decade, Hastings has evolved the program into one that can reload and keep its identity. The only goal left to change the course of the program is one that barely eluded this group, the ones that came so close to the years of work paying off and wrapping their hands around the trophy.

“I’m incredibly proud of them because they’ve gone to work every day. We all know, your dailies are what make your week, what makes your month, which makes your year. These guys came to work every day with a smile on their face and made their dailies fantastic. The ride they took our staff on and our program on was special,” said Hastings after the title-game loss.

“There will be time for reminiscing and thinking about the rest of it. Like I said, it’s a little raw now. And we’re going to learn from it and we’re going to move on. We’re going to be better because of what happened tonight and because of the journey that these guys allowed us to have together from the beginning of the year until now.” 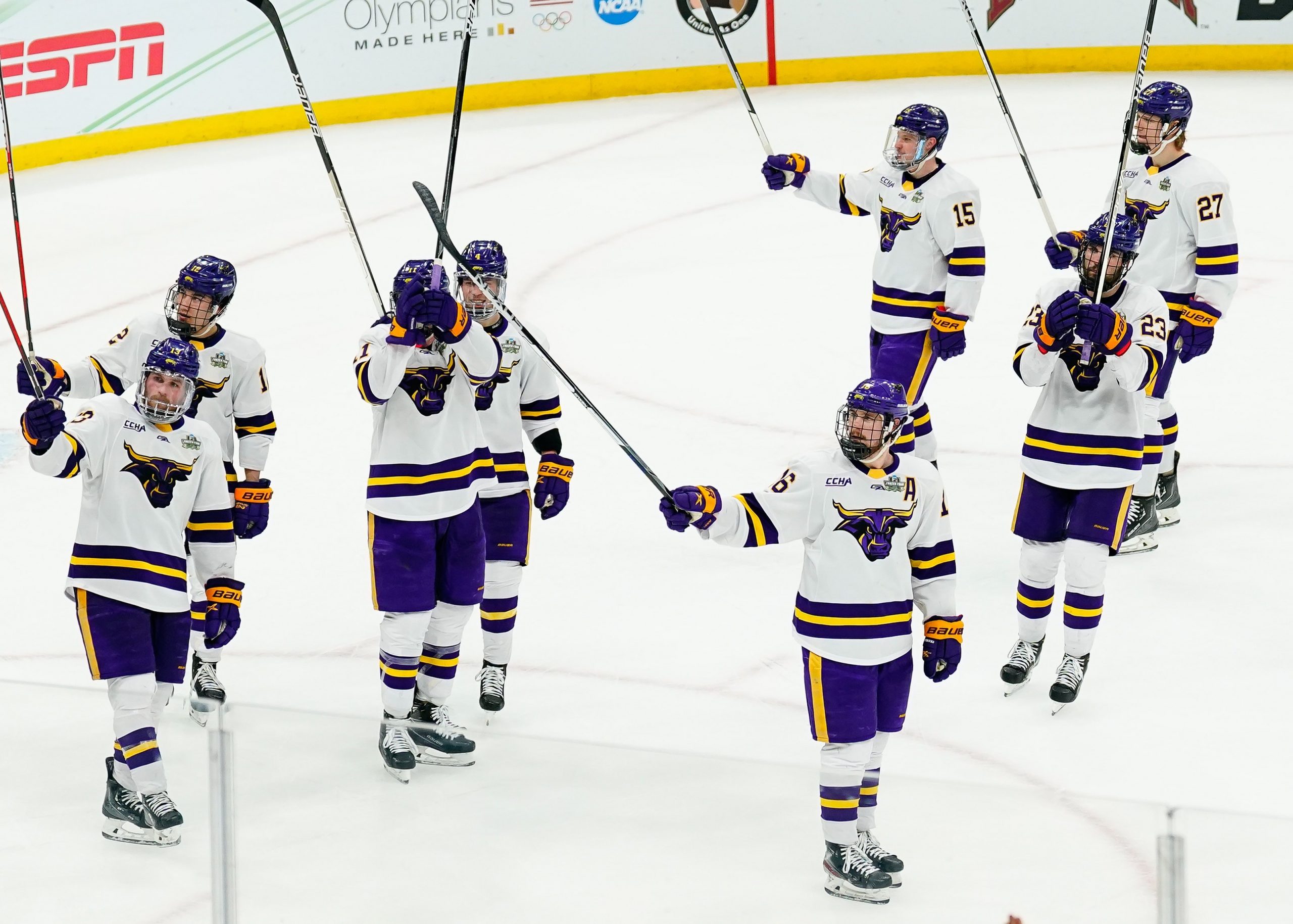