The Boss Is Back

Bruce Boudreau is determined to lead Wild back to postseason 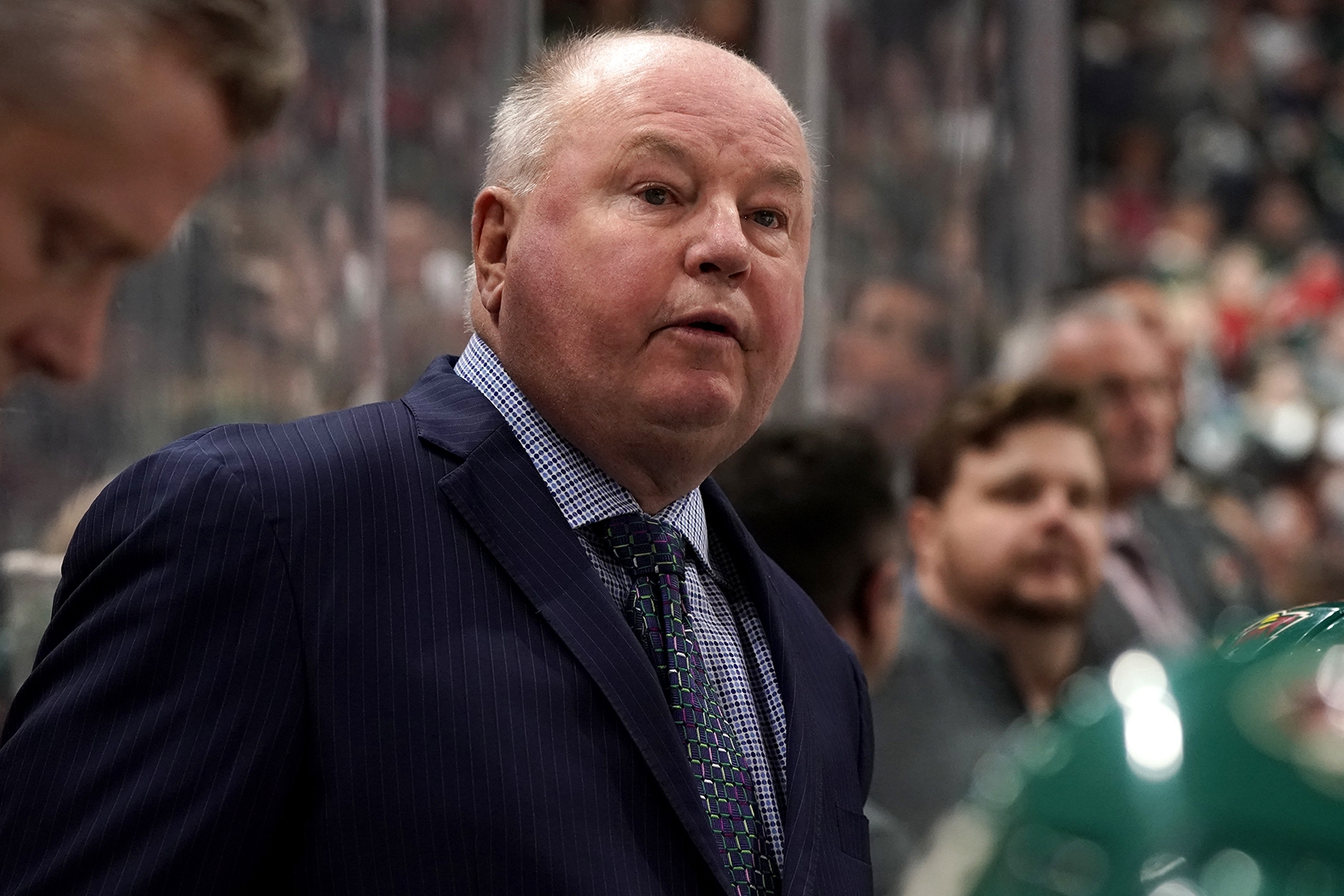 Wild coach Bruce Boudreau watches Minnesota’s 2018-19 home-opening 2-1 shootout loss to the Vegas Golden Knights on Oct. 6, 2018 at Xcel Energy Center. Boudreau is expected to be back for a fourth season behind the Wild bench despite the team’s failure to qualify for the Stanley Cup playoffs for the first time in seven seasons. (MHM Photo / Rick Olson)

Bruce Boudreau is determined to lead Wild back to postseason

St. Paul — Bruce Boudreau is in an unfamiliar position. It’s left him wandering around his house. This Minnesota Wild coach, who wears his passion for the game on his sleeve, won’t be behind a bench coaching in the Stanley Cup Playoffs this year.

He said it sucks.

But don’t expect him to tune in to the wall-to-wall coverage of the Stanley Cup Playoffs games. Well, at least not right now. He’s done OK without hockey for the past few days, at least.

“I haven’t even turned on the NHL Network or anything,” Boudreau said Tuesday following a season-ending news conference. “I don’t want to hear anything about who’s favored, who is not favored in the playoffs.

“I hope it sits in everybody’s craw the way it’s sitting in mine because then you’ll be determined never to let it happen again.”

The Wild are missing the Stanley Cup Playoffs for the first time in seven years after a 37-36-9 season that left them in last place in the Western Conference’s Central Division with 83 points and out of one of the two Wild Card spots. The Wild haven’t won a playoff series since 2015, getting ousted in the first round the past three seasons. 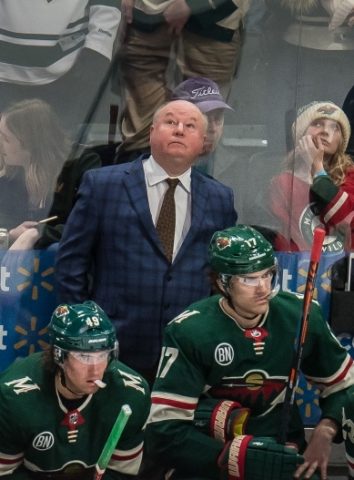 Who could blame Bruce Boudreau for looking to the heavens for divine intervention in the midst of what was his most trying season behind the Minnesota bench? (MHM Photo / Jeff Wegge)

The 2018-19 campaign saw some success for the Wild, even at the top of the standings for a bit, before they fell out of the playoff picture with a few weeks to go. They didn’t win two games in a row in the month of March through the end of the season. Looking at the fact that they were shut out in four of their final six contests, it’s not hard to see why things went off the rails. The Wild were shut out 11 times this season and finished with a below-.500 record at home (16-18-7).

The good news for Boudreau is that he’ll be retained for next season in the final year of his contract. Despite a new general manager coming in prior to this season, trading away core players like Mikael Granlund, Charlie Coyle and Nino Niederreiter, Boudreau was not one of NHL coaches to lose his job at the season’s end.

It was a tidbit he learned during Tuesday’s news conference at Xcel Energy Center with general manager Paul Fenton. Boudreau said he and Fenton hadn’t discussed it.

“I knew I had another year left on my contract, and my job is to coach until I’m told not to coach anymore,” Boudreau said.

Fenton made it clear that Boudreau will coach the Wild next season and that he’s the guy that will lead the team back to where they all want it to go.

“I have total confidence in him,” Fenton said. “You look at this track record for the number of years that he’s been an NHL coach, it’s amazing. So Bruce is our coach next year.”

Fenton added that he had not discussed the future of any other Wild coaches with owner Craig Leipold yet.

It’s understandable that Boudreau doesn’t know what to do this spring. This marks the first time in his NHL coaching career that he hasn’t made the playoffs, throwing out the 2011-12 season which he split between Washington and Anaheim.  He coached both of those teams, plus the last two seasons with the Wild, to playoff berths for a total of 90 games. Unfortunately, he also has a 43-47 record in the playoffs and no Stanley Cup to show for it.

The 37-36-9 Wild record this season is the lowest amount of wins for any NHL team he’s coached, again with 2011-12 and the lockout-shortened season in 2012-13 with Anaheim (30-12-6) as the exceptions. Those are also the only two seasons where his teams have failed to reach the 100-point mark in a season.

Despite the disappointment of this season, Boudreau still holds on to optimism for next year. Hitting the 100-points mark shouldn’t be insurmountable, in his mind.

“We had 101 points last year. One hundred points won the division this year,” Boudreau said. “I mean, if we can get a little bit better and a little healthier, I don’t see why we don’t get 100 points every year.”

How can the Wild make that happen? A simple formula is to take the nine points in the overtime/shootout losses column and convert those into wins. That would have given them an additional 18 points right there. Or think back to this season where games should have been won. It was head-scratching to see the Wild show up for solid victories over top opponents around the league like Tampa Bay, Calgary and Washington, and then lose to clubs like New Jersey, Florida and Chicago.

Off the top of his head on Tuesday, Boudreau already had at least 10 games where his squad was the better team or blew multi-goal leads in the final 20 minutes.

“So if you can escape those things and move forward and be a little more consistent, then I think in my mind, it’s not a hard problem to get to 100-plus points again,” Boudreau said.

After Tuesday’s NHL draft lottery, it was determined the Wild will pick 12th in this summer’s NHL Draft. Whatever moves Fenton makes with the draft and in the offseason, he referred to it not as a rebuild by a work in progress that he’s trying to do “on the fly.”

Fenton added that he’s happy with the young players that have come in from this year’s trades, players like Ryan Donato and Kevin Fiala.

Zach Parise, who confirmed to the media Tuesday that he played through a broken foot and knee injury toward the end of the season, also acknowledged there’s a lot of work to do for this team to get back to the postseason. There’s no sugarcoating that.

As for Boudreau’s time this spring, he’ll likely still find a way to be around the game. It just won’t be at the NHL level for the moment.

“I’m going to Fort Wayne to watch my kid in the playoffs in the East Coast League, but that’s as close as I’m getting right now,” Boudreau said.