Mikey Eyssimont trades the Rocky Mountains for the Granite City 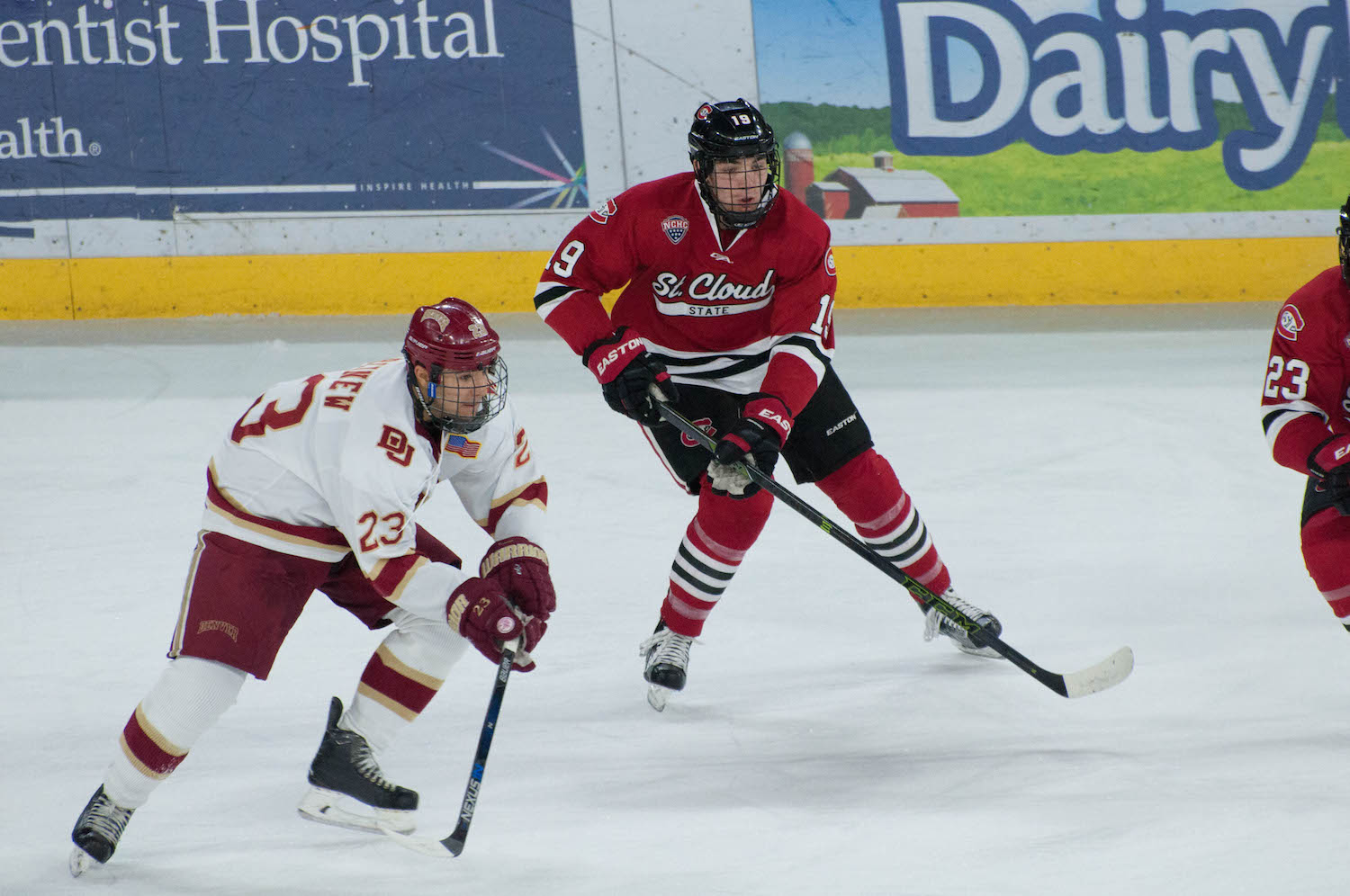 DENVER — If it wasn’t exactly the homecoming he necessarily expected, St. Cloud State’s road sweep of Denver University Dec. 11-12 was certainly the triumphant return Huskies freshman forward Mikey Eyssimont had hoped for. The Littleton, Colo. resident played his first two games in his home state in three years since his midget hockey days with the U16 Colorado Thunderbirds and skated off a winner each time.

A 2014 graduate of Chatfield Senior High School,Eyssimont had at least 16 to 18 family members in attendance at Magness Arena each night for SCSU’s 5-2 and 6-2 wins. They were treated to Eyssimont helping to cap off the weekend’s scoring on Saturday by setting up Kalle Kossila’s third goal of the game on a pretty backhanded cross-crease pass with 6:23 to go.

“I haven’t played in front of my mom and dad (George and Nancy) and sister at the same time in over two years,” Eyssimont said. “Just having them all there, and a couple other family members and friends is really special.”

Eyssimont’s sister, Anastasia, is also Mikey’s twin and an elite athlete in her own right. Once a promising gymnast with aspirations to compete for Denver University or the Air Force Academy, Anastasia’s career was cut short by broken elbow and she is now a student a the University of Colorado in Boulder.

An avid outdoorsman, Eyssimont said he loved every second of growing up and playing hockey in Colorado.

“It’s where I met my best friends growing up,” Eyssimont said. “We’re still really close today and a lot of us have played against each other or with each other here in this arena.”

While Eyssimont has already tested out his fishing skills in the Upper Midwest, he has yet try his hand at landing a fish through the ice. It’s something he expects his teammates to rectify at some point this winter.

“There’s a lot of guys that are actually really into it so I’m hoping I can do that,” Eyssimont said. “I’ve done some Walleye fishing in Detroit Lakes, I’ve been up to Minot, N.D. too, so I’ve done a lot of fishing up there.”

The origin of Eyssimont’s journey from the Rocky Mountains to the Granite City cannot be traced to the Denver suburbs but the hockey hotbed known as the Arizona desert, in a tournament Eyssimont played with the Thunderbirds. 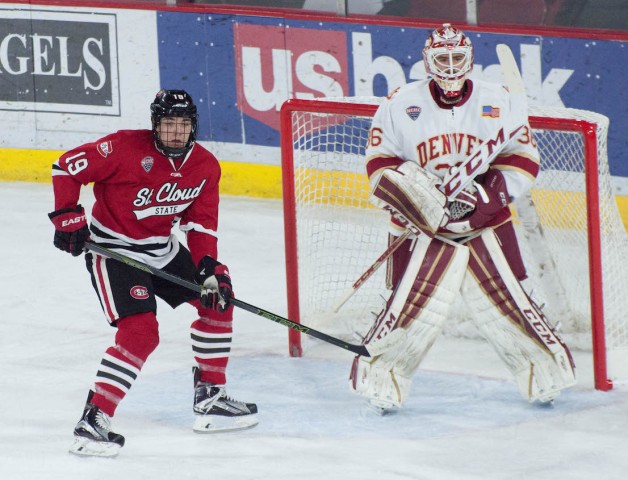 Mikey Eyssimont positions himself in front of Denver goaltender Tanner Jaillet in the Huskies 5-2 win over the Pioneers on Dec. 12 at Magness Arena in Denver. (Photo by Shannon Valerio /Hockey VIPs Magazine)

“The first time I saw him was in a midget game in Scottsdale and he had five points and I go, ‘That kid can play,'” Motzko said. “He’s the kind of guy we like to get in our program. The sky’s the limit for him.”

Eyssimont appreciated the interest Motzko showed in him and once he visited the St. Cloud State campus, he was sold.

The next two-plus seasons were spent in the USHL, first with the Fargo Force and then, following a late-season trade last spring, the Sioux Falls Stampede where he played under former North Dakota player and assistant, Cary Eades.

After notching 13 points in 14 games to close out the regular season, Eyssimont was the league’s second leading scorer with 16 points (9-7—16) in 12 playoff games and helped lead the Stampede to the 2015 Clark Cup title.

During his 108 game career in Fargo, Eyssimont developed a close friendship with teammate Mason Morelli, whose Nebraska Omaha team visited St. Cloud the week prior to the Denver series. The two spent time together in the offseason in Morelli’s hometown of Minot, N.D.

Eyssimont said he and Morelli, both currently business majors, were always very competitive in practice as teammates and, to a degree, that competitiveness was evident in a game setting as opponents earlier this month at the National Hockey Center.

“I remember I was lining up next to him on a draw and he kind of slashed me in the shin pads,” Eyssimont said. “I gave him one on the top of the skate and he said, ‘Hey Mike that actually hurt.’ I was trying to be as competitive as I could but I actually apologized to him.”

Eyssimont’s assist on Saturday was the 6-foot, 192-pound rookie’s fourth of the season to go with the goal he scored in a 3-1 Halloween win over Miami. While it’s a far cry from the 43 goals and 86 points in 134 games overall in the USHL, Motzko knows what he’s got in the Colorado kid.

“He’s going to be an outstanding college player for us,” Motzko said. “He’s got good, strong size down in the corners, he’s got great vision, a great shot and offense is going to come.”