Together or apart, Rochester’s Aney sisters are the Yin to each other’s Yang 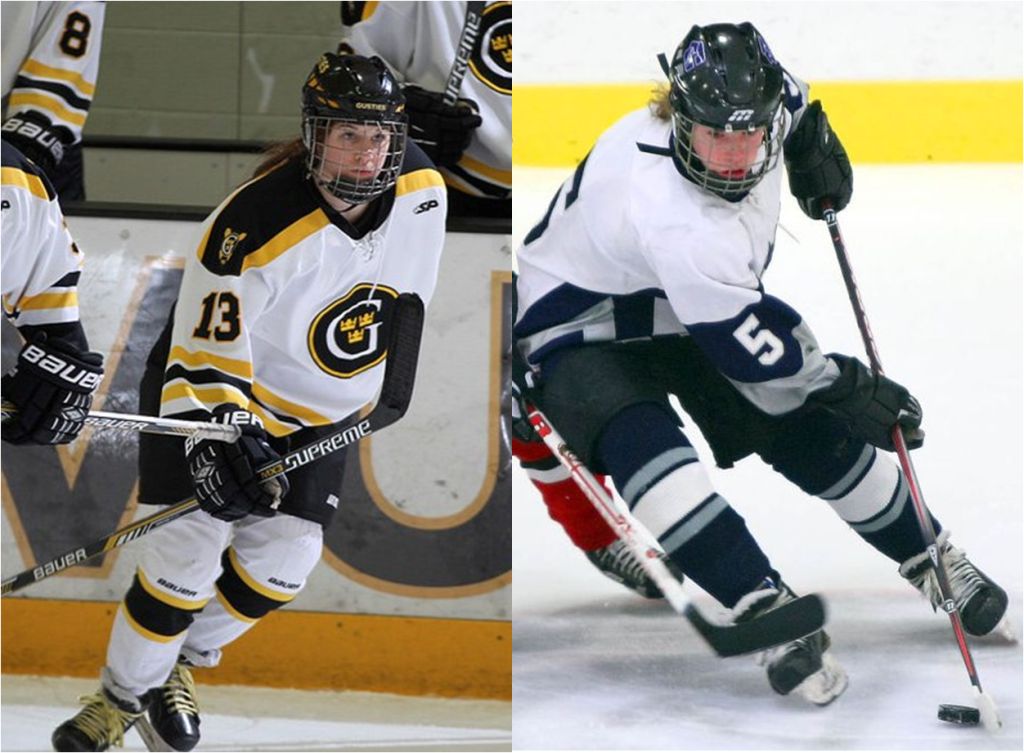 Together or apart, Rochester’s Aney sisters are the Yin to each other’s Yang

Katie and Jessie Aney are very much typical sisters. In some ways they are incredibly similar, but in others they are complete opposites.

What makes them atypical sisters is their skill on the ice. Last season they both scored over 100 points while leading Rochester Century to a season in which it suffered just four losses. They were the yin and the yang of the Panthers. They did it in different ways, but always competing humbly and at an extremely high level.

This season is the first time in years the sisters aren’t playing on the same line or team. Katie is a freshman on Gustavus University’s women’s hockey team where she has six goals and two assists through 19 games of her rookie year.

Jessie, on the other hand, just finished the regular season of her senior year with the Panthers leading the state in assists (52) and points (96) while her 44 goals tied for second.

It’s been a huge adjustment for the siblings who had been nearly inseparable on and off the ice. 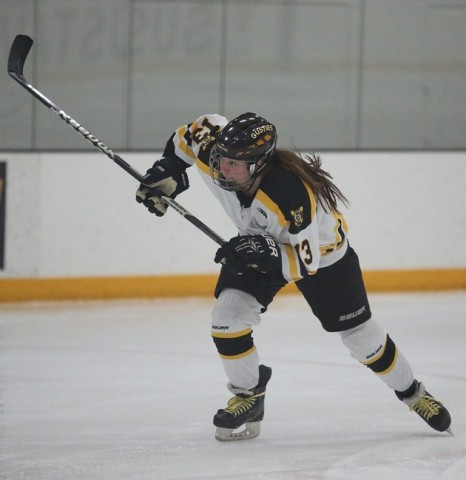 “A lot of times when I get the puck I am looking for her on the back door and I realize she is not there,” Jessie revealed. “It has been fun too; I have been working with different people and it has developed my hockey IQ. I have had to think more and not just always looking for Katie.”

Just as versatile off the ice, they are both multi-sport athletes. They both play tennis and Katie also plays lacrosse. Katie is playing tennis in addition to hockey at Gustavus this year.

“I appreciate both sports more if I have to set one aside,” Katie said. “Then when I get to play it I enjoy it because I haven’t done it for a while. It is nice to have breaks from them. I think I learn a lot from both of them, they help me to continue to grow as an athlete and make me more multi-dimensional.”

Jessie will leave hockey behind after this season having committed to play tennis at North Carolina.

“Our parents always encouraged multiple sports because it is good for athletic development and if you have a bad day or a bad year in one sport you always have the other sport,” Jessie added. “It is a nice break from always hockey, hockey, hockey or tennis, tennis, tennis. I enjoy playing two sports and I didn’t want to give one up in high school.”

She did it for the dough

The hockey duo almost didn’t happen. After her first season of youth hockey younger sister Jessie wasn’t sure she wanted to play anymore. Luckily for Rochester Century there was an added benefit to go with your sister to hockey sign ups.

“She said ‘no, I don’t want to play’,” said older sister Katie, “but there was cookie dough at the sign up. She wanted to come to sign up to get the cookies. So we got there and our dad said ‘okay Jessie, this is your last chance. She said ‘I guess I’ll play’. Ever since then you haven’t been able to stop her.”

Rochester Century coach Dan Maidl discovered Jessie almost by chance when he stopped by the Aney home to borrow a radar gun owned by her father Tom. Tom invited Maidl to the basement shooting range he had built to meet Jessie.

“She was seven or eight years old and I am watching her thirty feet from the net,” Maidl said. “She is calling her shots out — bottom corner, five hole. I believe she was shooting 500 pucks a day. Katie shot pucks then too.”

Tom — who coaches hockey as well — also built a rink on the family’s property.

“He really coached us and motivated us to be better players,” Katie said of her father. “We would talk about hockey all the time.” 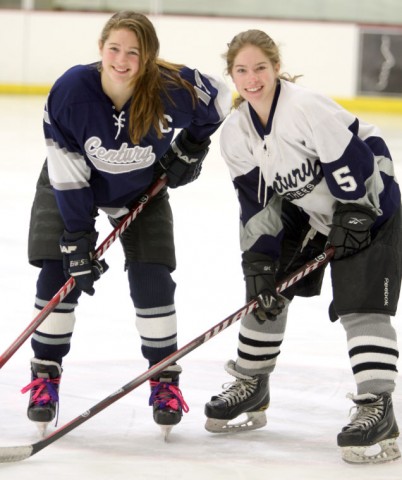 A program on the rise

Both the sisters and the Century program took big steps last season. Just a handful of years ago the program that was almost shut down as it struggled to get to .500. Last season, at 22-4, was the programs’ best.

Though the Aneys were a big reason behind the resurgence, they know they couldn’t have done it without the girls that came before them.

Katie recalled attending a Century game with Jessie and a couple other future Panthers teammates in their youth hockey days. The Panthers lost, a common occurrence in those days, but the girls went into the locker room to visit their heroes after the game.

“We thanked them all for playing hockey even, if they hadn’t before, to keep the team running so girls in the future could continue to play hockey for Century,” Katie said.

“Katie and I just really enjoy having the opportunity to help Century have their best seasons,” Jessie added. “Every year we would have our best season which was awesome. We would set program records all the time.”

“It was because of hard work that when they came to our program, they were the leaders right out of the blocks,” Maidl said. “They had the ability and the attitude and the tenacity to never give up.”

In addition to their obvious talent, Maidl says the Aneys play within the team concept.

“They are not selfish hockey players,” the long time hockey coach said. “Last year I can count on both hands the number of goals they scored unassisted.”

The Yin and the Yang

Though they have a mutual love for the game, their approach in the locker room is completely different. Maidl said Jessie is the more serious of the two while Katie is more of a “free spirit” who will joke with teammates and even dance around a bit.

“She is more quietly motivated,” Katie said of her sister. “I am more outwardly. So when I get excited I am more expressive to the team, but when she gets motivated she will just work her butt off.”

“We are pretty different,” Jessie agreed. “Katie is more outgoing and pumps people up. She is more of a leader. I am quiet. I work really hard but I am not going to say anything to anybody.”

But their differences don’t end with game preparation. They each bring their own unique traits to the ice.

“Jessie is like a little jitter bug. She can move the puck through anybody and score,” the coach said. “Katie is taller and has a longer reach. When she moved she looked like she was just gliding. She has great stick and puck control.”

Maidl referred to Katie as a “general on the ice” who knows where her teammates should be and their respective roles.

“Katie’s strengths are her leadership and her hockey IQ,” Maidl said of his former two-time captain. “She made my job as a coach easy.”

He said Jessie’s tenacity and skating ability are what sets her apart, especially when opponents try to slow her down with physical play.

“[Jessie] doesn’t fall down,” Maidl said about his top returning scorer. “She is so strong and she maintains control of the puck or looks for someone to pass to. She can shoot from anywhere and put a hard shot at a specific point.”

“Jessie has always been the hard worker in whatever she does,” said big sister. “She motivated me to be a better player and to work harder on the ice.”

The sum of the parts … 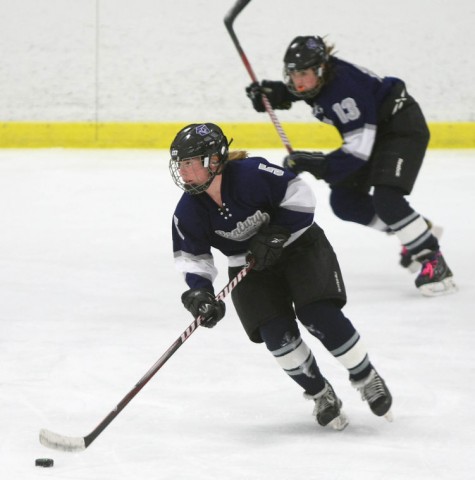 Despite their different games, they meshed perfectly for the Panthers. The years they spent playing together growing up were obvious.

“They talk to each other, but they have their own way of communicating,” Maidl observed over the years. “They tend to know where the other is on the ice — what the other is going to do. Sometimes as coaches we are standing there and we are in awe of what we are seeing. It is fun to watch.”

Not just great athletes, Maidl says they are solid in school and in the community.  The sisters’ devotion to the hockey program doesn’t stop after the season as they both help with the youth program.

“They are well-rounded kids,” Maidl said. “They are both 4.0 students in school. They are just plain old good kids, they are active in church. It is just really neat.”

“They have been great hockey ambassadors — especially in Rochester.”

Not playing together has been, and will be, a challenge, as will competing in different states. Like always, though, it will be the Aney sisters competing humbly at an extremely high level.

“They both have gotten a lot of press and stuff, but they don’t flaunt it,” Maidl said. “They could show off on the ice, but they don’t, they play the game. They are great kids.”