The Man With The Plan 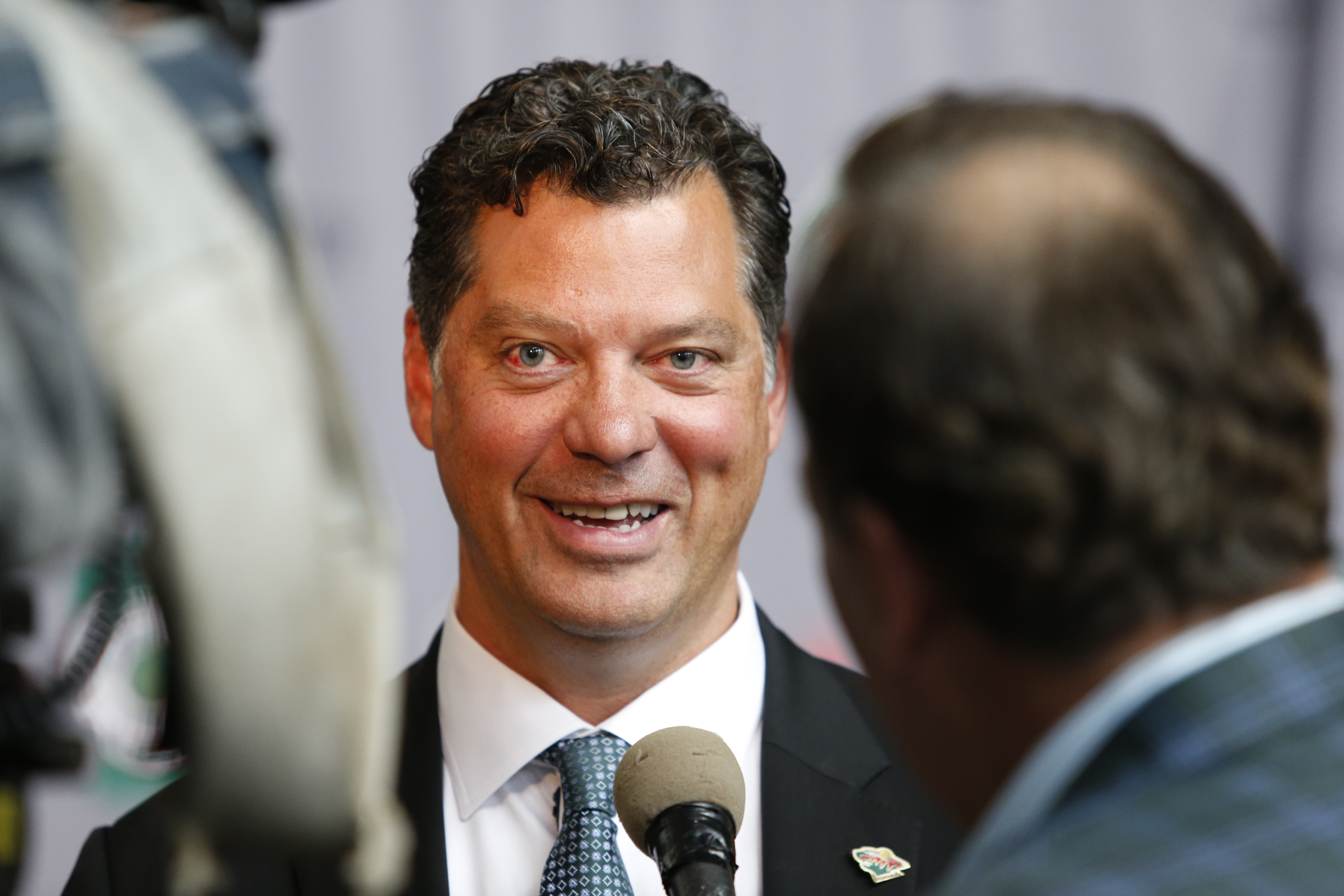 ST PAUL – Minnesota Wild general manager Bill Guerin didn’t let a media interview stop him from having a little fun with some of the players as they skated off the ice following an early-November practice.

“You’re shooting off your back leg again,” Guerin said, in a serious tone to forward Luke Kunin.

As Kunin started to explain, Guerin assured him that he was kidding. Guerin also offered up a “how you doing, buddy?” to another player who walked by a few minutes later. He greeted Jonas Brodin with a “Hey, Brods.”

Guerin made sure to stop a passing Alex Stalock by putting the empty paper cup he’d been holding in Stalock’s goaltending glove with a playful, “Hey, can you hold this for a sec?”

Sometimes it’s that positive attitude at the rink every day that can definitely change the feeling of a team, even one that went through a tough spell on the ice in the fall, according to defenseman Jared Spurgeon.

“He’s a guy that likes to joke around,” Spurgeon said.

As recently as 2010, Guerin was playing in the NHL. Now, he’s the fourth general manager in Minnesota Wild history. He said he tries to remember the feelings of a player and what it’s like in his front office roles. 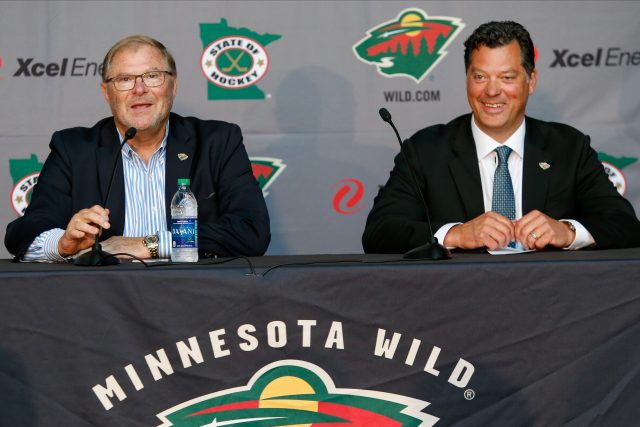 Guerin was named the Wild’s general manager in August after Paul Fenton was fired. The four-time Stanley Cup winner (twice as a player) also interviewed for the position last year. There was no doubt for Guerin that this was where he wanted to be, in such an incredible hockey market. He sees amazing potential and ownership in Craig Leipold that Guerin called “fantastic.”

His passion didn’t start and end with playing the game. It spilled over to all the everyday happenings with hockey clubs, building a team and putting a staff together. He spent the past eight seasons in the Pittsburgh front office, the last five as an assistant general manager.

“There’s so much more to it than you think of when you’re a player,” Guerin said. “When I started, I was fortunate to learn a lot of different departments and really see firsthand how it was done.”

He jumped right from his hockey jersey into a suit. Taking that next step up without the “assistant” tag to his new title in Minnesota, Guerin acknowledges there are a lot of other things to be responsible for as the general manager.

It’s about communication with ownership and staff, knowing what’s going on in the rest of the league and helping to support the business side of hockey.

“You just have so much more under your umbrella that you have to be aware of,” Guerin said. “I think every day is a little fire to put out.”

Maybe it wasn’t a fire, but Guerin already made a splash before the 2019-20 campaign even got started. On Sept. 14, he signed Spurgeon to a seven-year contract extension.  Guerin called the decision a “no-brainer” knowing how important Spurgeon’s been to the organization and then coming here to see how valuable Spurgeon is to what Guerin is trying to build in Minnesota.

“Just the way he let us know where he envisioned this team going was big for me,” Spurgeon said. “He has a vision of that.”

It’s been quiet so far on the trade front for Guerin, which could change as the All-Star Weekend and bye week hit. One of Guerin’s main focuses so far this season with his new team was getting to know everybody, evaluate everyone from players to the coaching staff, trainers and folks in hockey operations “and see what makes them tick,” Guerin said.

His time spent around the team will go in waves, he said, though this fall he was at every game as he got a feel for the team. But there will come a time where he’ll need a break from the team, and vice versa.

“If you watch your team too much, you either fall in love with them or hate them too much,” Guerin said. “There’s a fine balance there.”

Spurgeon sees the fact that Guerin isn’t too far removed from his playing days as an asset. He’s a GM that understands what players are going through and is someone to bounce ideas off of, Spurgeon said.

“If you do need to talk… you know it’s not someone who’s never played the game,” Spurgeon said. “At the same time, he demands a lot, and I think that’s a good thing to have.”

Guerin’s biggest challenge early on this season wasn’t necessarily in his control. It was not getting frustrated when the Wild started 0-4 overall and won just one of the first nine road games while taking up residence in the Central Division basement. Though the Wild rebounded some this season, they found themselves back in last place in the division and well out of a playoff spot just before the All-Star Break.

Make no mistake, Guerin said in November that he believes in this Wild group. He wants them to keep the attitudes positive, and they’ve done that, he said. The players have done what’s been asked of them, including their effort and commitment, Guerin said.

Guerin addressed the team prior to the season’s start, which seemed to go over well among the players. Listening to him excited a lot of people, said defenseman Matt Dumba. It was important for Guerin because he said he wanted to deliver a clear message of what he wants to start building in Minnesota.

“He definitely wants the best for all of us,” said Dumba, near the end of training camp. “He wants to instill that winning culture, that attitude.”

“I think we’re excited to have him as our leader,” Koivu said.

The roots run deep for Guerin in Minnesota. Sure, he’s a native of Massachusetts and played for eight non-Minnesota NHL teams. But Guerin was drafted by the New Jersey Devils at Met Center in 1989. He even played a couple of games against the North Stars in 1993 before they moved to Dallas, where he played from 2002-06.

He remembers scoring a goal against the North Stars and Grand Rapids native Jon Casey.  It came during the first period of a 4-2 Devils loss to the North Starts on Jan. 28, 1993 during Guerin’s first full season in the NHL.

“In the old Met,” Guerin said. “And I loved it. I loved walking down the stairs to the ice. They had great ice. Great building.”

Mike Modano also scored in that game, for the North Stars. The hockey careers of Modano, now an executive advisor with the Wild, and Guerin have intertwined for years and eventually come full-circle here, too. They’ve been friends since they were 18 years old, Guerin said, were teammates in Dallas and on three Olympics and two World Cup teams.

Guerin wants the fans to know that there’s a great organization here and that some patience might be required as he does everything in his power to put together a great team.

Though patience might be the key as he continues to learn about his new team, Guerin said it’s not too early to have goals and a checklist in place. There’s a plan, he said, working with his team of assistant general manager Tom Kurvers, director of hockey analytics Mat Sells and director of hockey operations Chris O’Hearn.

“We’re executing it day-by-day,” Guerin said. “It’s not always just what’s in front of us. There are a lot of different things going on.”