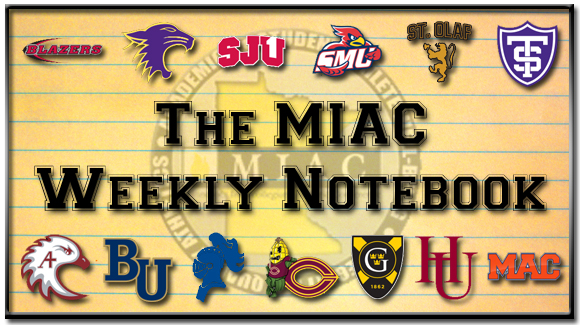 Auggie men’s hockey opens with two wins in MIAC Showcase
Augsburg’s men’s hockey team opened its season with two victories in the MIAC Showcase over the weekend in Blaine, Minn., with a 6-2 win over Saint Mary’s on Friday and a 3-1 win over St. Olaf on Saturday. The Auggies showed plenty of scoring balance, with six different players scoring goals and 16 players claiming either a goal or assist on the weekend. Ben McClellan (JR, Cottage Grove, Minn./Cretin-Derham Hall HS), Niklas Almstrom (SR, Medina, Minn./Benilde-St. Margaret’s HS) and Dylan Meier (FY, Highlands Ranch, Colo./Mountain Vista HS) had two goals each for the Auggies on the weekend, and John Bretzman (JR, Mendota Heights, Minn./St. Croix Lutheran HS) played the entire weekend in goal, with 38 saves (.927 save percentage) and three goals allowed (1.50 GAA).

Women’s hockey splits series against No. 6 UW-River Falls
After having their home opener ruined against UW-River Falls Friday evening, Bethel University’s women’s hockey squad returned the favor against the Falcons Saturday night. UW-River Falls topped the Royals 5-3 on Friday, but BU didn’t quit, as they went on to defeat the Falcons by the same score Saturday. Caroline Kivisto began her sophomore season with four goals in the opening two games.

A sweet MIAC Showcase sweep
Dan Hrabowychhad a goal and three assists and goalie Chris Neamonitis stopped 36 of the 37 shots he faced as Concordia rolled over Hamline 6-1 to complete a weekend sweep at the MIAC Showcase.

The Cobbers, who beat No.11-ranked St. John’s on Saturday, are now 2-0 for the second time in the past three years and only the second time since 2006-07 that CC has started a year with two straight wins. Concordia is one of only three team in the conference to go unbeaten at the season-opening showcase.

Fourth-line success
The nationally-ranked SJU hockey team opened its season with a 4-2 victory over Hamline at the MIAC Showcase Nov. 1 in Blaine. Each member of the Johnnies’ fourth line scored a goal and totaled three points, combining for nine of SJU’s 11 points on the night. Senior Zach Knight (Minneapolis, Minn.), junior John Carroll (Eagan, Minn.), and sophomore Neal Smith (Rogers, Minn.) entered the game with a combined eight points (3g/5a) in 78 career games: Carroll (1g/2a in 28 games), Knight (1g/1a in 28 games) and Smith (1g/2a in 22 games).

Triple dip
Bobby Thompson (Centerville, Minn.) had a goal and an assist in the SMU men’s hockey team’s season-opener at the MIAC Hockey Showcase last weekend. Thompson then followed that up with a goal and an assist in the Cardinals’ 3-2 win over St. Olaf in their second game of the three-day conference showcase. Thompson has now recorded two or more points in each of the Cardinals’ last two season-openers. Thompson notched his first collegiate three-point game (1 goal, 2 assists) in SMU’s 7-2 win over Bethel to open last year’s season.