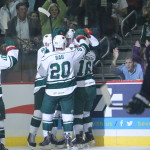 Des Moines, Iowa – As early as 5 p.m. new fans could be seen tailgating in the parking lot of

Wells Fargo Arena in Des Moines, Iowa. The fans had arrived at the arena early and were eagerly awaiting the 7 p.m. faceoff of the inaugural Iowa Wild game.

The Iowa Chops, who were the American Hockey League affiliate of the Anaheim Ducks at the time, played their last game at Wells Fargo Arena on April 11, 2009, a 5-3 loss to the Quad City Flames. The state of Iowa was without an AHL franchise from that day until Saturday, Oct. 12 when the Iowa Wild, AHL affiliate of the Minnesota Wild, played their first home game at Wells Fargo Arena.

10,213 fans were in attendance for the Wild’s 1-0 win against the Oklahoma City Barons. It was the largest opening night crowd in the history of Iowa hockey and the second largest crowd to see a hockey game at Wells Fargo Arena. One of those fans, who showed up early to tailgate in the parking lot outside of the arena was Tony Hamilton.

Hamilton of Urbandale, Iowa was wearing a green Minnesota Wild jersey in the parking lot and has been a hockey fan his whole life. He said he was “super excited” to see the inaugural game.

The Iowa Stars, who were the AHL affiliate of the Dallas Stars, and the Iowa Chops failed after short stints in Des Moines, but Hamilton thinks it’s a great thing that this team is affiliated with the Minnesota Wild.

He said that most of the people he had talked to about it seemed excited and he hoped that it would make for a loud environment.

“Everybody seems like they’re really excited for it so hopefully it’s loud and proud.”

The more than 10,000 fans in the arena who were waiting for the first goal in team history had to wait until 7:06 into the second period for Wild winger Brett Bulmer to break the scoreless tie on a one-timer that came off a pass from winger Jason Zucker. Chad Rau also had an assist on the first Iowa Wild goal.

After the game, Bulmer said finally getting that first goal in the second period was a weight off their shoulders.

“I think we had a bunch of chances early and as soon as you get that first one you kind of get rolling and start playing with more confidence so it was pretty big to get the first goal between both teams,” Bulmer said.

Wild coach Kurt Kleinendorst said he didn’t mind waiting until the second period to get the first goal of the season citing previous organizations he’s coached for, particularly the Lowell Devils, AHL affiliate of the New Jersey Devils through the 2009-10 season, and a defensive approach.

“If you take a look at where I come from and organizations that I’ve been involved with, New Jersey is the master of playing good defense,” Kleinendorst said. “What I’ve tried to do is take that same approach but try to add a little bit of offense to that. So hopefully we can continue to be really good defensively, which I thought we were tonight in a lot of ways and find a way to score a few more goals because I don’t want to sit here and win 1-0 every single night of the year. That’s just a little too tough.”


Kleinendorst thought the inaugural game was a “special night” at Wells Fargo Arena despite the low-scoring, defensive battle.

“It wasn’t a thing of beauty, but it was a beautiful thing,” Kleinendorst said. “I think exactly what we have been talking about for the last week, two weeks is that if you came tonight, if you had a ticket for tonight I don’t think anybody could’ve left and not felt good about the event that took place.”

Before the game an intro video was featured and fireworks were fired off as the whole team was introduced to the fans for the first time. These were some of the reasons that Kleinendorst thought the event was special.

“I thought they did a phenomenal job with the opening and the energy in here was outstanding,” Kleinendorst said. “It was a hard-fought game. Maybe people could’ve argued that it would’ve been better had there been more goals scored, but I don’t think the lack of goal scoring took away from the excitement of the event.”

The opening game of the season for the Wild was also goalie Johan Gustafsson’s first AHL start. Gustafsson made 27 saves in the contest against the Barons en route to the shutout.

Gustafsson said it was “awesome” to feed off the new Iowa Wild fans.

“We’ve been waiting a long time for this game, it was a really good crowd, it was really good to have them here,” Gustafson said. “It was a fun game.”

Despite that, Kleinendorst said that they gave a “hard hat” to Gustafsson after the game.

“I thought, obviously, he played particularly well and if we don’t get the zero, we don’t necessarily get the two points,” Kleinendorst said. “I thought he was outstanding.”