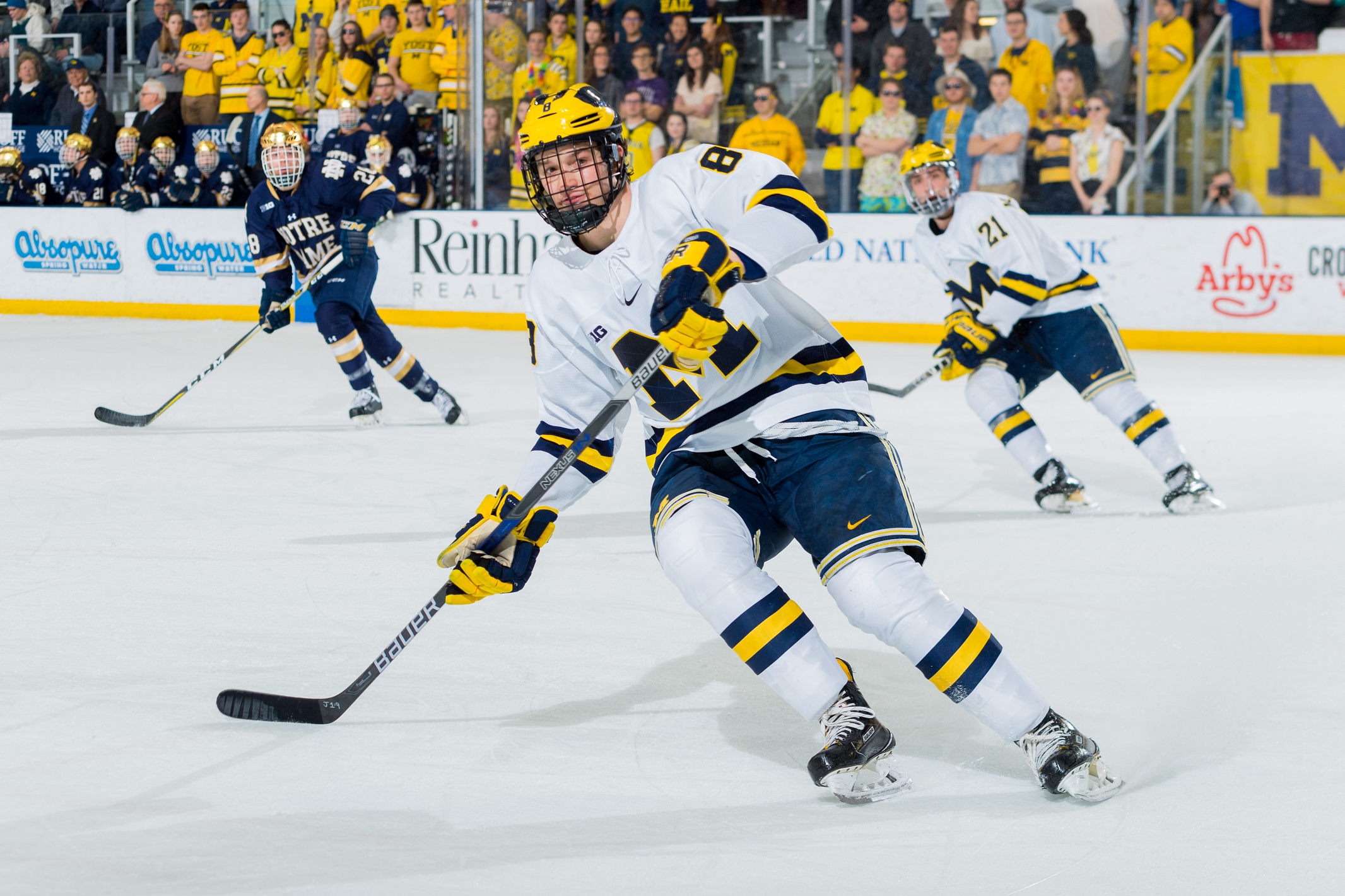 More often than not, when University of Michigan coach Mel Pearson walks out of Yost Arena after a Wolverines practice, he’ll find freshman forward Jack Becker still on the ice long after many of his teammates have departed to feed off the day’s post-practice training table offerings.

Becker is not going without, mind you, the former Mahtomedi High School star is trying to satisfy his never-ending hunger to improve his game.

“What I really like about Jack is his commitment to the game, his commitment to getting better,” Pearson said. “I left the rink tonight and he’s the last guy off the ice working on some skill things. He doesn’t do it to show off, he just does it.”

Pearson is no stranger to the Becker family work ethic as Jack’s father, Russ, played for Pearson at Michigan Tech from 1985-88, when the latter served as an MTU assistant under Herb Boxer prior to a 23-year stint under Red Berenson at Michigan.

As Pearson tells it, though, the similarities between father and son — the first second-generation player he has coached — end right there.

“Jack’s a lot better player,” Pearson said laughing. “No, Russ was a great guy. Big, strong, raw, gangly defenseman out of Virginia. You can tell the apple doesn’t fall far from the tree because Russ was a hard worker. He might not have been the most talented player but he gave you everything he had every night.”

Jack Becker says he is motivated by his love of hockey but also hinted at an ulterior motive.

“I like to stay out on the ice because that’s just a lot of fun … and I try to avoid studying a little bit,” Becker confessed through a chuckle. “I think if you just focus on getting better every single day it’s going to eventually pay off.”

The payoff this weekend could be a national title for Becker, Pearson and the Wolverines who faceoff against Notre Dame in Thursday night’s second Frozen Four semifinal at St. Paul’s Xcel Energy Center.

“This doesn’t always happen,” Becker said v. “It took a lot of hard work to get here as a group and now we’re here to win the national championship.” 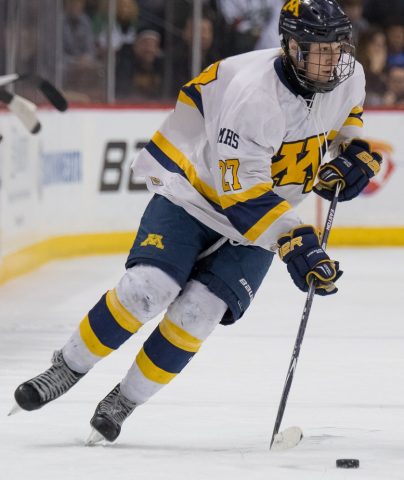 Jack Becker scored five goals in three games as a junior for Mahtomedi to help lead the Zephyrs to a third-place finish at the 2015 Class A state tournament. (MHM Photo / Jonny Watkins)

Becker’s return to St. Paul comes more than three years after the Dellwood, Minn. native led his Mahtomedi team to a third-place finish at the 2015 Class A boys’ state tournament. Becker, a junior, potted a hat trick in a quarterfinal win over New Ulm and added a pair of shorthanded goals in the Zephyrs’ third place game win over St. Cloud Apollo three days later.

“High school hockey has got a really special place in my heart,” Becker said. “It’s just hockey in its purest form, having fun with your buddies out there. Every tournament time it’s always great to reflect on those memories and talk to your buddies and we always have a good time.”

That state tournament was the last time he would don the gold and navy Mahtomedi ‘M’ on his chest after long youth and high school career doing so.

Becker played two games for the United States Hockey League’s Sioux Falls Stampede that spring before skating the next two full seasons for the Stampede, including his senior year in high school.

“The USHL was just two more years for me to get bigger and stronger and work on my skating a little bit more,” said Becker, who scored 24 goals among 51 points in 109 USHL games. “Coming out of high school I was a little lanky and thin so I needed to develop physically to get ready for the college game.”

He immediately understood why when he and his coach-to-be finally met.

“Just his personality and he knows so much about the game and he’s helped so many players move on to professional levels,” Jack said. “Obviously, my dad experienced that firsthand so I think my dad and I are the biggest coach Mel Pearson fans.”

While in his second full season playing for Sioux Falls, the newest member of the ‘Mel Pearson Fan Club’ verbally committed to Michigan Tech, where Pearson was in his sixth season as head coach of the Huskies. Naturally, when Pearson replaced the retiring Berenson in the spring of 2017, Becker followed his new coach to Ann Arbor.

“We realized how important it was that the coach and the coaching staff wanted you to be a part of their program and what they had going,” Russ Becker said. “So when Mel made the decision to move to Michigan it was a pretty easy choice and decision for Jack to follow him.”

With a familiar ‘M’ back on his chest, Jack Becker said his freshman season was an adjustment for him in terms of speed and strategy. By the final weekends of the season’s first half, however, he believes he was playing very well.

“I didn’t really get rewarded on the stat sheet but I think that carried over,” Becker said.

“He’s shown great growth this year,” Pearson said. “I don’t think he had a goal at Christmas time when he went home and I believe he’s got eight now so he’s really stepped up his game.”

Becker not only has all eight of his goals since Jan. 1, he has 13 of his 14 points overall in that span.

With his son about to participate in a Frozen Four in his hometown, playing for a school like Michigan and a coach he respects as much as he does, Becker’s father admits he never dreamed things would turn out this well for Jack.