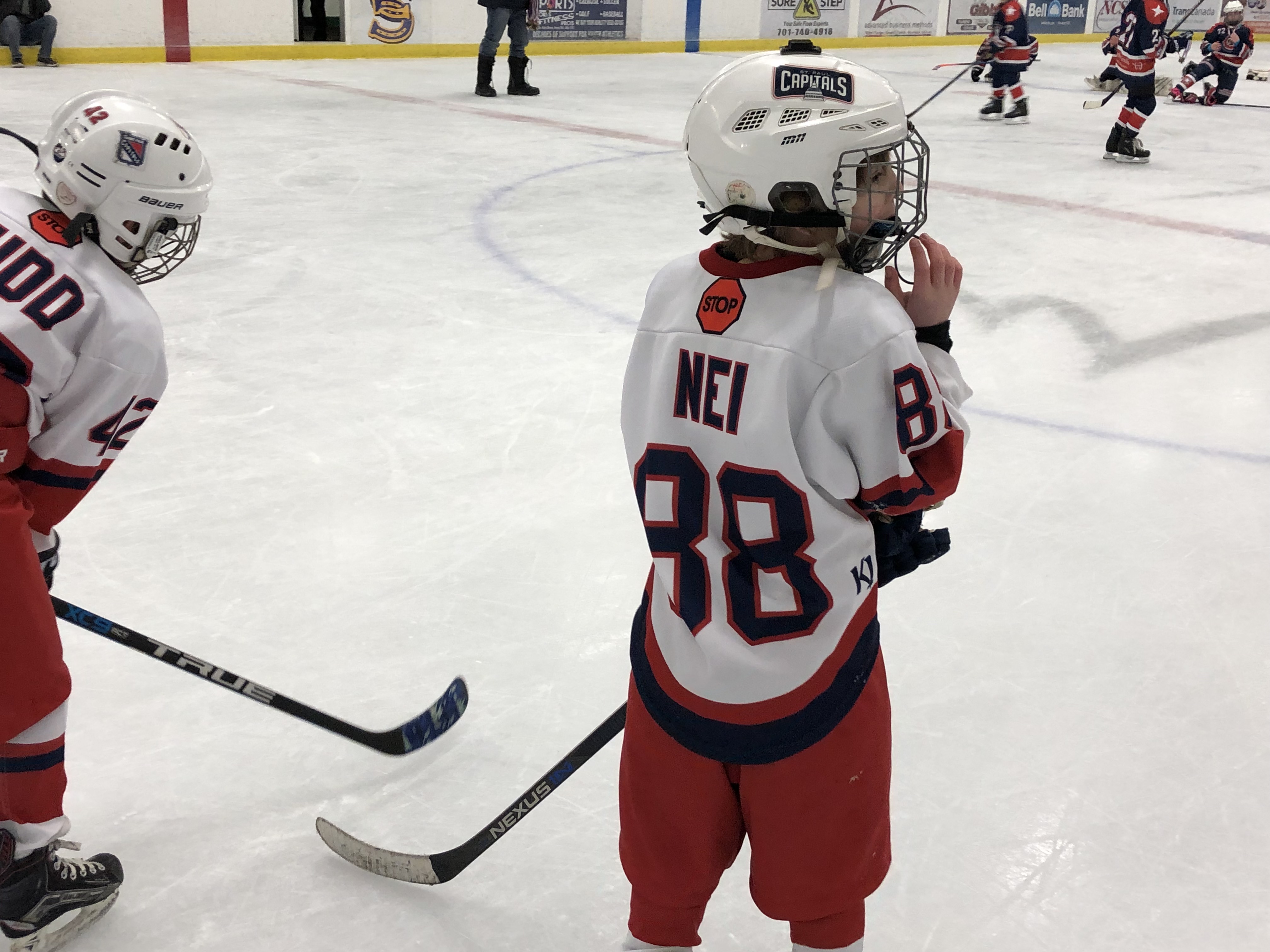 When Owen Nei met Devan Dubnyk last year, he asked the Minnesota Wild goaltender to sign the back of his Wild jersey with the number 99 on it.

“He said, ‘You’ve got some really big shoes to fill,’” Owen said. Number 99, of course, was worn by Wayne Gretzky. 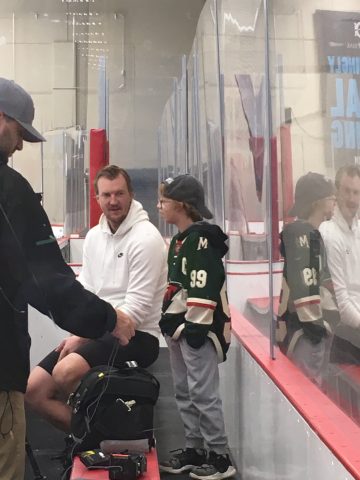 Owen and Dubnyk met again after the Wild’s game against the St. Louis Blues on Feb. 23. Dubnyk and some of the other Wild players stopped to sign autographs for the Blaine Bantam Bantam B2 team. Owen was there, too, representing Gillette Children’s Specialty Healthcare.

When he saw Dubnyk, Owen presented the same 99 jersey wanting an autograph.

“He was like, ‘Can you sign this?’ And I said, ‘Buddy, I signed it right here,’” Dubnyk said, chuckling. “And he said, ‘Will you sign the other number now?’

“So, he’s got both the nines on the jersey signed in the middle by me.”

Wild fans might not know the 11-year-old Owen or his story, but they’ve probably seen him. He appears in the Hiway Federal Credit Union Hockey Kids4Kids commercial with Dubnyk that’s shown in the arena during Wild games and during the FSNorth broadcasts. Hockey Kids4Kids was started three years ago to inspire youth hockey teams to participate in community service. Youth hockey teams hold fundraisers to benefit Gillette Children’s Specialty Healthcare in St. Paul to help kids who may not be able to play hockey because of medical conditions or injuries.

Owen is one of the Gillette Children’s kids and has become a bit of a representative for the Hockey Kids4Kids program. His parents found out at the 19-week ultrasound with Owen that he had aqueductal stenosis, where the ventricles in his brain that carry spinal fluid were blocked between the third and fourth ventricles, compressing the brain tissue, according to his dad, Chris. With almost no brain tissue, Owen’s parents were advised to abort the pregnancy and declined.

Owen had surgery right after he was born addressing Goldenhar syndrome, which is a rare malformation of the cranial structure. Owen has had 15 surgeries in his young life and is deaf in his left ear. A CT scan at eight months old showed 100 percent of his brain tissue was back. 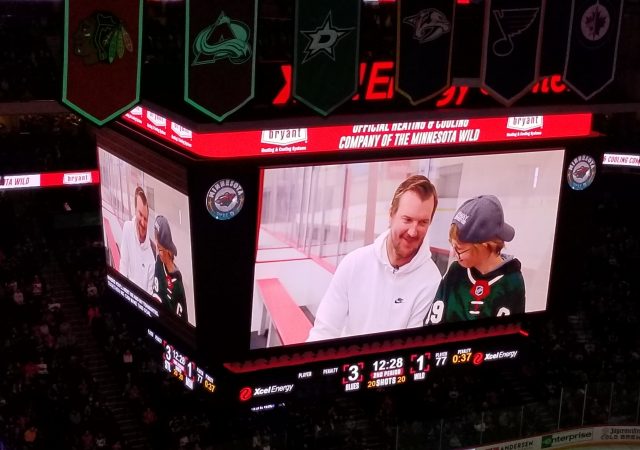 Chat with Owen for even a few minutes and it becomes clear how much his passion for hockey spills over. Let’s start with the basics: How long has he been a hockey fan?

“Probably since day one,” Owen said.

Yes, since the day he was born, Owen confirmed. With two older siblings who play and a dad who coaches, Owen’s always been at the rink, his dad said.

Even with the connection with Dubnyk, Owen maintains former Wild forward Mikael Granlund is his favorite player. He still keeps up with him, even after Granlund was traded to Nashville last season.

“I just like the style of his playing,” Owen said. “And he seems like a nice guy, and I’ve always wanted to meet him.”

Owen was in the suite with the Blaine team (one of the top fundraising teams and selected at random to receive a party at Xcel Energy Center) for the 4-1 Wild loss to St. Louis. The Wild scored their only goal as Owen was in the middle of an interview with a certain reporter in the suite. Upon hearing the goal horn and cheers from fans, Owen immediately perked up and started trying to get a glimpse of what happened.

With the interview about wrapped up, he was told he was free to go back to his seat. He jumped up and couldn’t get there fast enough, it seemed. That enthusiasm is part of what they refer to as the “Owen Factor” in the Nei household, Chris said. 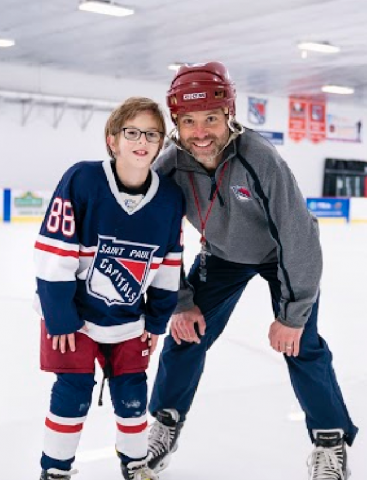 Owen Nei and his dad, Chris, at the hockey rink. (Chris Nei)

“The Owen factor is that he’s given us a perspective on life of what’s important,” Chris said. “He’s always positive and he’s got a big heart, and he’s super tough to go through all those surgeries.”

Owen plays the game, too, as a member of the St. Paul Capitals C squirts team. He has the approval of his pediatric neurosurgeon to play, although the doctor was concerned because Owen’s spinal column was a bit smaller and he’s at a higher risk for being paralyzed from a traumatic injury, according to Chris.

But at the squirts level, the play is so slow and players are small enough and close to the ground that it isn’t much of an issue right now. He can play into bantams, until checking starts, his dad said. Owen is a decent skater, with a backyard rink for practice, and has good hand-eye coordination in spite of his condition, according to Chris.

This year, Owen’s dad told him if he wants to keep playing hockey, they’ll just figure out a way to make that happen.

“Let’s take it one day at a time,” Chris said. “You’ve defied the odds already. Who’s to say you can’t play?”

Dubnyk can see how much Owen loves the game and doesn’t think it’s a question of Owen wanting to play.

“Certainly, there’s quite obviously nothing that will be slowing him down,” Dubnyk said. “So, he’s going to do everything plus more and more than people think he’s capable of doing.”

Owen has some goals in mind, too, like playing Division-I hockey, winning a national championship and winning the state high school tournament.

“I’ve always wanted to play in the NHL,” Owen said. “And score a goal in the NHL and just make great friends.”

Dubnyk said he’s fortunate to be able to raise money for Hockey Kids4Kids, but it’s Owen’s inspiration that drives it all.

“Kids’ innocence and strength is just the most incredible thing in the world when they’re faced with adversity,” Dubnyk said. “They don’t feel sorry for themselves. They just go.

“It’s a special thing to see and obviously you wish that he didn’t have to do it, but he can certainly teach a lot of us a really good lesson.”