Even in defeat, Wild vanquish ghosts of seasons past 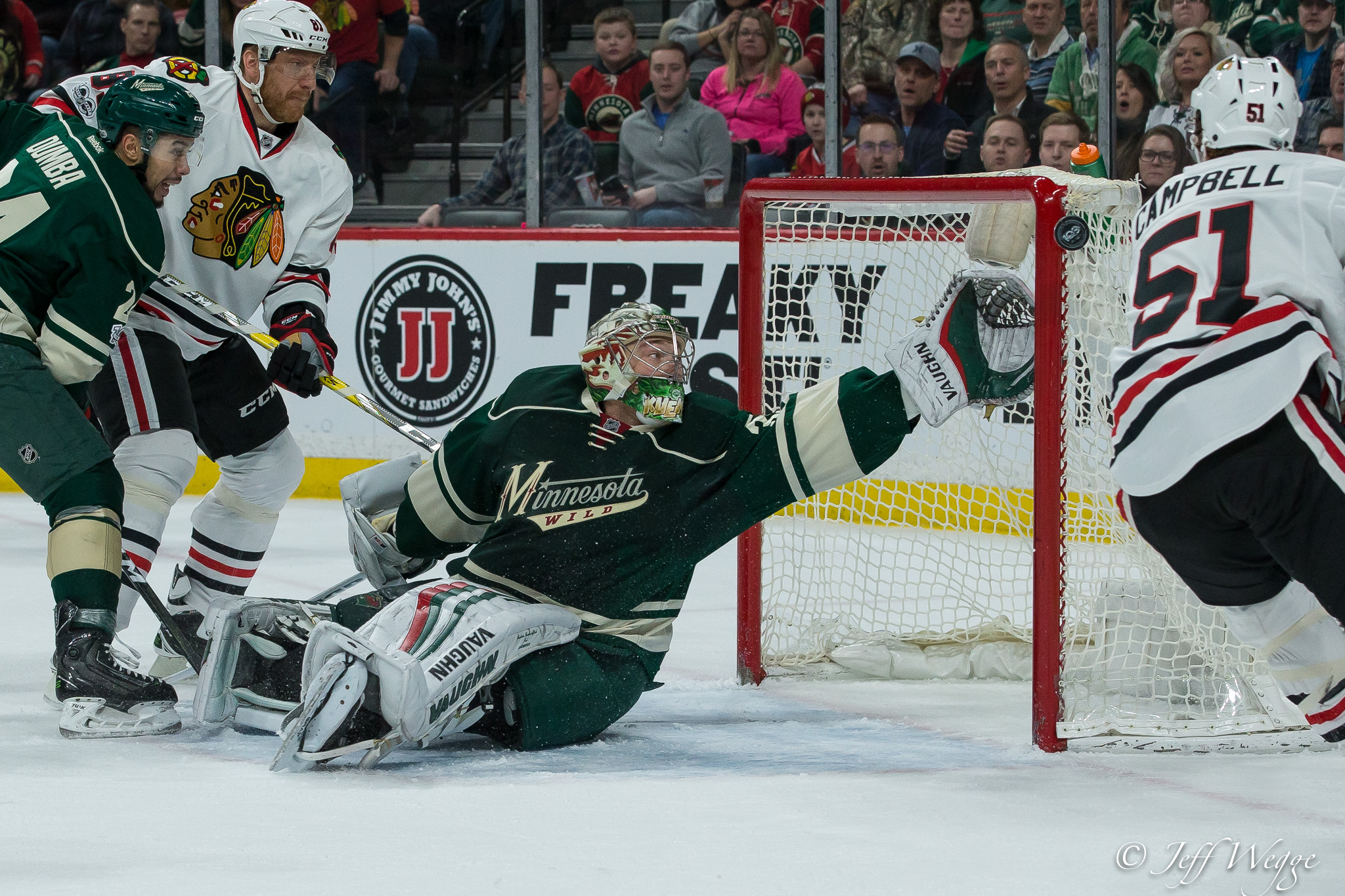 Photo by Jeff Wegge for MHM

Even in defeat, Wild vanquish ghosts of seasons past

St. Paul — If you’ve wondered if the Wild are for real this season, they took a giant step toward demonstrating exactly that in a ferocious match against the Chicago Blackhawks Wednesday night at the Xcel Energy Center.

Erik Haula’s tying goal with 3:03 remaining in the third period forced overtime and the Wild claimed a hard-earned point despite succumbing 4-3 to a Blackhawks’ power-play goal in overtime.

Even with the presence of the biggest home crowd of the season at 19,326 plus a national TV audience, Minnesota had enough reasons on this night to sag a bit.

The Wild had finished a nine-day road trip through Canada less than 24 hours earlier, while the well-rested Blackhawks had not played in four days. In addition, the Hawks had lost the last eight meetings between the rivals and trailed Minnesota by six points.

Then the Blackhawks grabbed leads of 2-0 and 3-2 and appeared poised for a regulation win behind an outstanding performance from goalie Corey Crawford, who finished with 35 saves.

But wait a minute.

“It’s not always easy to come from a long road trip and play the first game,” captain Mikko Koivu said. “I thought we responded well.” 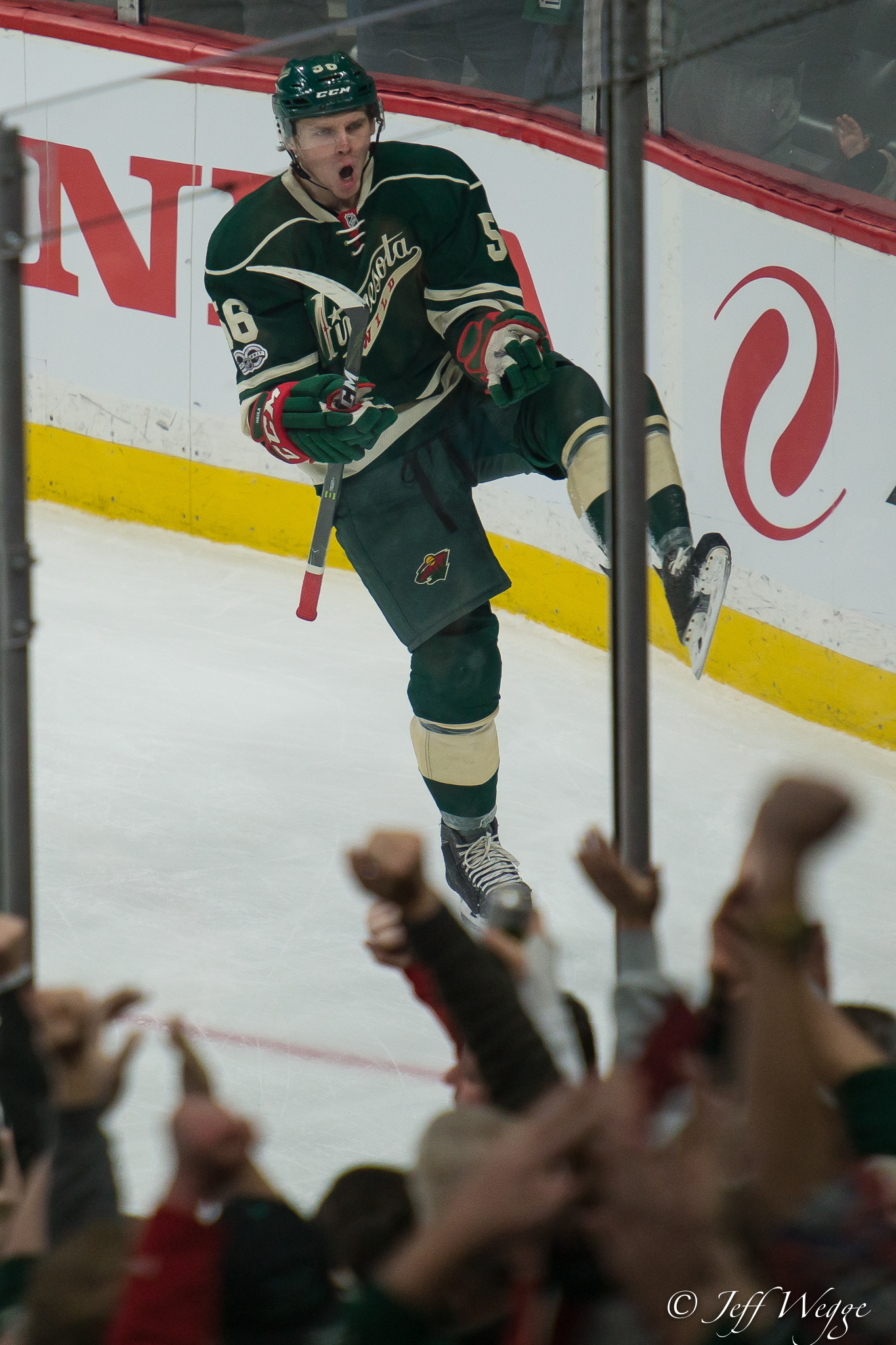 Indeed, second-period goals by Jared Spurgeon and Zach Parise tied the score at 2-2 and Minnesota was in high gear before Chicago regained the lead on Richard Panik’s goal late in the second period.

Not to worry. The Wild had one more comeback in them, getting a dazzling rush from defenseman Marco Scandella, who set up Haula at the doorstep for his team’s tying goal.

“We’ve been doing that all year, getting ourselves back in games,” winger Zach Parise said.

“I think it’s believability that they can come back,” Wild coach Bruce Boudreau said. “I mean, we never felt out of it by any stretch.”

Boudreau pointed out that the Wild could have scored four goals in the second period when they outshot Chicago 19-10, and they produced three more prime scoring opportunities in overtime before going short-handed on Ryan Suter’s holding penalty.

“That’s a pretty good team to have on the power play, 4 on 3 for two minutes,” Boudreau observed.

Jonathan Toews proved that when he slid the puck past goalie Darcy Kuemper 39 seconds into the 4 on 3, allowing the Blackhawks to finally get a regular-season win over the Wild and to draw within five points in the standings.

Nevertheless, the Wild had to leave the Xcel Energy Center feeling heartened: They outshot and out-chanced the Blackhawks, came from behind twice and totally earned a day off before they have to resume their eight-game homestand.

“It’d be like getting blood out of a stone to practice tomorrow,” Boudreau said after the game. “I think they left it all on the ice. I think Chicago did. That’s what makes it a great game — two good teams going at it and it ends up in overtime.”

It would be hard to ask for more.