Warroad versus Roseau is classic 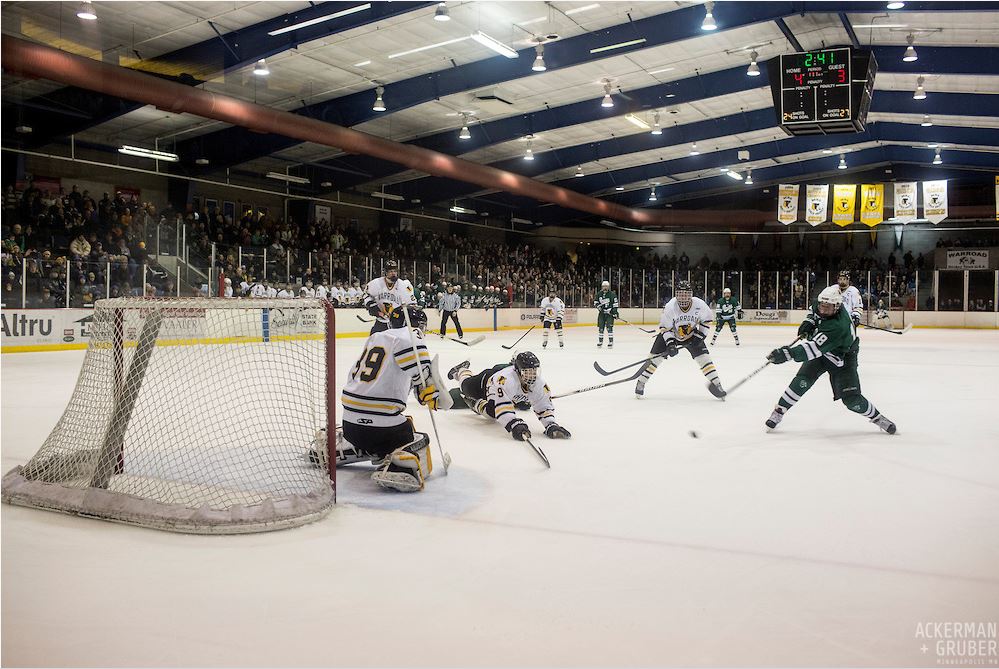 Warroad versus Roseau is classic

A trip to Warroad might reveal state’s biggest rivalry.

As sports rivalries go, you have the legendary Dodgers-Giants baseball duels, the Vikings-Packers pro football matches, the previous generation’s college hockey pinnacles of Gophers-Badgers, Gophers-Fighting Sioux and Gophers-Bulldogs battles. And in high school sports, you could reach way back to the days of Johnson-Harding in St. Paul, or Southwest-Edina on the West side. Up North, we could always rely on Hibbing-Greenway, which gave way to Greenway-Grand Rapids and ultimately Grand Rapids-Duluth East, which arose from the old East-Cathedral battles in Duluth in the 1960s.

But if you had to pick just one, the choice would be simple: Roseau against Warroad. Or, Warroad against Roseau. It could be in any sport, but hockey clearly was the specialty on the menu every year. The two Northern Minnesota towns are about 20 miles apart on Hwy. 11, which runs East-West, parallel to the Minnesota border with Canada, and they are close to the same size, and share similar passions about their hockey heritage.

Their games were typical of such rivalries, fitting the cliché about throwing out the records for the season, because this game was all that mattered. At least until the two met for the second time, in the other city. You could climb into your car in one town and be at the arena in the other in 20 minutes, but they were separated by much more in attitude.

In my 30 years covering all levels of hockey for the Minneapolis Tribune, one of my passions was to set aside the North Stars, the Gophers and all else going on in the world in those weeks when my calendar had the Tuesday circled to designate the next game between the two. I would almost always be road-testing a new vehicle for my auto column that week, and I would often be joined by an eager passenger — often Herb Brooks, when he was coaching the Gophers.

One year when Roseau beat Warroad to come to the state tournament, I remember talking to someone from Warroad and remarking that I was sure everybody in Warroad could set aside the animosity of their rivalry and pull for Roseau to win the state title. “Are you kidding?” he answered instantly. “No way! We don’t want to have to listen to them gloat for a year.”

Sure enough, another year when Warroad won the Region 8 berth in the state tournament, Roseau fans who had season tickets renewed annually for the state tournament had the same response. No way would they cheer for the little town of 1,700, located 20 miles East on Hwy. 11. Regional pride was no competition for the intensity of their rivalry.

After the high school league split hockey into two divisions, and Roseau chose to move up and play with the larger AA schools, I was surprised when Warroad stayed in Class A. Justification can be found in the reasoning that when the state first split into two tiers in 1992, and then revised it to Classes AA and A in 1994, Warroad had never won a state title while Roseau had five big trophies in their arena trophy case. Warroad won the first Class A state title in 1994. The decision guaranteed Warroad an almost annual trip to the state tournament, where, having done well against many AA schools all season, they often would beat other Class A teams by double-digit scores.

But the annual games between Roseau and Warroad remained classics, regardless of class designation. In fact, it might have increased the rivalry because both towns knew they wouldn’t meet again in sectional play.

Driving from the Twin Cities to Warroad is 355 miles and about a 7-hour epic, leaving room to stop for a quick lunch along the way. We’d usually take various alternatives north from the Twin Cities, winding up on Hwy. 72 Northward through the scenic fir forests up to Baudette, to connect with Hwy. 11, where we could head West to Warroad.

By the way, one of the surest ways to tell if you’re talking to a city person or a knowledgeable Minnesotan is to coax them to say the name “Baudette.” If they say “Baw-dette,” which is common phonics, based on the spelling, you know you’ve got the city person. If they say “B’dette” as though the first syllable is replaced by a short-interval apostrophe, you know you’ve got a person who knows the area, or at least has had to choose between Baudette and Warroad when they were heading for Lake of the Woods — the world’s premier walleye fishing lake.

Year after year I would make sure that my schedule worked so that I could cover one of the two Roseau-Warroad games, even trying to alternate towns. Roseau also had a neat old arena, and when they built a new one, they positioned it right next door so they could have two arenas. Also, like Warroad, Roseau gave the youth hockey players full access to the arenas whenever they were available.

One neat aside is that after Neal Broten, then Aaron Broten, and their linemate Butsy Erickson all starred at Roseau and came to play together at Minnesota, and after Neal and Aaron had their long NHL careers, there would be occasional television features on the glorious history of playing hockey on outdoor rinks in Minnesota. Invariably, they would find Neal Broten, and interview him at length, and he would willingly comply.

It always gave me a chuckle, because while he and his brother played a lot of road hockey on the frozen streets of Roseau, they never played hockey outside because they always had access to as much indoor ice as they could use. Brian Bonin skated on a backyard rink his dad made at their White Bear Lake home, all the Duluth hockey players played on outdoor rinks growing up, in Warroad the kids skated on the river or, as Henry Boucha said, on frozen-over ditches alongside roads. But while Neal Broten found it easier to talk around the question than to explain everything about the indoor arena access, the Roseau kids never skated on outdoor rinks.

Warroad star David Christian, Broten’s 1980 Olympic teammate, was the subject of a controversial switch coach Herb Brooks made that paid richly. David had been an outstanding centerman in high school, for Dick Roberts, and at North Dakota, and he later would be an outstanding NHL star as both a center and wing. Brooks, right after naming his team, informed David that he would be shifting back to defense.

The parallel goes back to when Joe Micheletti was the star center for Hibbing’s 1973 state championship team. Brooks recruited him to come to Minnesota, and moved him back to defense, because he always wanted some defensemen who were smart puck-carriers. Micheletti made the switch smoothly, and wound up as standout NHL defenseman who might not have had the same impact as a forward.

In Christian’s case, he not only made the switch smoothly, but he was often Team USA’s best defenseman in the Lake Placid games, playing with great precision against the best players the Soviet Union, Czechoslovakia, Sweden and Finland could send at him. When the year was over, David moved back up to forward and, again, made the transition smoothly to NHL stardom.

After the Olympics, I interviewed David Christian about the magnitude of beating the Soviet Union. We had a great conversation, but he didn’t say too much, and he always had this wry little grin on his face, reminiscent of his Uncle Roger. Suddenly it hit me. There was no pressure on the Mark Paveliches, or Mark Johnsons, or Billy Bakers, or the Neal Brotens, or the David Christians.

In David Christian’s case, it was not the huge challenge of facing the Soviets, it was the same as if he was in college, or high school, or on the Warroad Bantams, or in one of the near-daily pickup games he might play. He was going to play the best he could, every shift, to win that game, because it was the game he was going to play at that time of that day. It didn’t matter who the opponent was.

You can take the boy out of Warroad, but you can’t take Warroad out of the boy.

It’s worth a trip to Warroad to witness development of that attitude, but check ahead for the date when Roseau comes to The Garden (Tuesday, Jan. 30). As with numerous other home games, there might be 2,500 fans jammed into that arena on game night. Not bad, considering capacity is 1,800, and also not bad, considering the town’s population is 1,700.