The save of his life 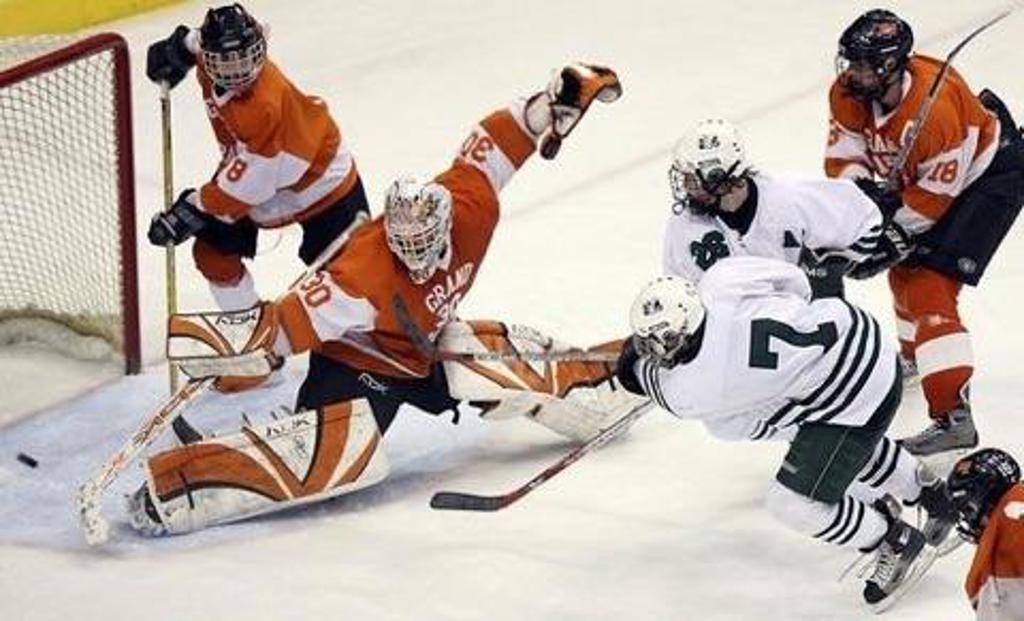 By Tim How (Special to Minnesota Hockey Magazine.com)

The fate of the Grand Rapids Thunderhawks hockey program may have changed on a cold night in Hibbing during the 2004-2005 season. With one varsity goaltender out sick and surging JV goalie Reidar Jensen coming off a JV shutout, head coach Bruce LaRoque called for Reidar Jensen to dress for varsity as a backup.

Grand Rapids left Hibbing with a disappointing loss, but Jensen got playing time late in the game and proved that he was worthy of the big stage. At least in that moment.

Duluth Denfeld was in town to play Grand Rapids a handful of days later at the IRA Civic Center. The varsity goalies were struggling, so LaRoque called for Jensen to get out of the stands and to get suited up. The sophomore goalie emerged 10 minutes later and when he took the ice, LaRoque simply pointed to the far end of the arena. Jensen skated to the far crease to a large roar from the hometown crowd.

Grand Rapids would go on to win Section 7AA each of the next two years before falling in the state championship. Jensen was outstanding at times, but his style was maddeningly unorthodox. He’s even happy to admit that his goal was to just get a body part in front of the puck. That strategy worked like a charm for two seasons with the Orange and Black.

The unconventional style resulted in wins and an opportunity to join the hockey team at Concordia College. Jensen was with the school for one season before returning home to Grand Rapids.

In March of 2013, Jensen was diagnosed with Type 1 Diabetes. The disease was uncontrolled for two years with the most serious side effects being DKA, seizures, and Diabetic Neuropathy.

Type 1 Diabetes is a serious auto-immune disease that affects youth at an exponential rate. Jensen, who was diagnosed at age 23, had an onset much later than most. The complications and physical issues that go along with the disease are far less than pleasant.

Jensen had a period of dry heaving for 14 straight hours that ultimately put him in the emergency room in November of 2014.

“Once admitted to the ER it took more than an hour to be able to get an IV in me to start replenishing the essential nutrients and fluids your body requires,” Jensen said. “After four days in the ICU I was cleared to go home.”

He thought the worst part was over. After all, he had lost 70 pounds in the three months prior to going to the emergency room.

Unfortunately, he was wrong.

Jensen went through the horrors of a seizure three times in the following two months. He was alone during each of the three episodes but was lucky enough to escape alive each time. Then, in March of 2015 he was diagnosed with Diabetic Neuropathy. While battling, there were times that he couldn’t feel his feet or hands throughout the day. The challenge was controlling the glucose levels in his body.

“It’s harder than you can really describe to people,” Jensen said. “Right now, I’m actually making a lot of progress. I’m mentally focused on being the best I can in every aspect of life possible.”

Fighting the fight with his love of sport 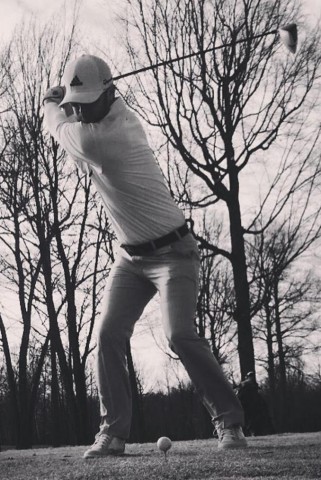 Jensen credits his dad for his first sports love, which isn’t hockey. It’s golf. Not only does Jensen enjoy golfing, but he is pretty darn good at it. Good enough, anyway, that he quit his regular job to play golf as a profession and use it to help spread awareness and help change diabetes by talking about it and making it easier to diagnose and handle.

The ultimate goal is that Jensen plays in golf tournaments mainly in Texas, Arizona, and the Dakotas, and to raise awareness for Type 1 Diabetes across the country. Enter Duffy’s Drive Fore Diabetes. It’s not only a creative name, but it’s the way that Jensen will attempt to help others with Type 1 Diabetes. The plan is to raise funds to help support the disease.

Not only is Jensen training and playing golf as much as possible, but he is also his own salesman. His quest is to find sponsors to help him help others through his journey. There is a Go Fund Me page set up where friends, family, and others can donate to the cause. The account has currently received $620 in donations.

“The support is shockingly more than I ever expected,” Jensen said.

This is going to take a while. Jensen is looking at completing his own challenge in 10 months with the goal of helping others while he is helping himself. He may be playing his toughest opponent ever in Type 1 Diabetes, but the way he is doing it…winning and losing is irrelevant.

“I can get last in every golf tournament and it’s still a win.”

Tim How is a 2007 graduate of Grand Rapids High School and Founder/CEO of the team’s website, grhshockey.com. He came through the youth program and was part of the 2006 and 2007 state tournament teams. After high school, How attended North Dakota State University and played three years of hockey in the ACHA, while graduating with a degree in Mass Communication in 2010.

How continues to work in the Fargo-Moorhead area a content writer in marketing and social media for Bell State Bank & Trust and as a part-time radio personality with Today’s Froggy 99.9. He is also the PA voice of Northern Cass Jaguar High School football, as well as an assistant fastpitch coach at Northern Cass High School. His passions are hockey, baseball, and football, and he loves spending time on social media. How married his wife, Alysha, in 2012. They live in Fargo, ND. and Alysha teaches first grade at Northern Cass Public School in Hunter, ND and is the head coach of the varsity fastpitch team.