The Snow Must Go On 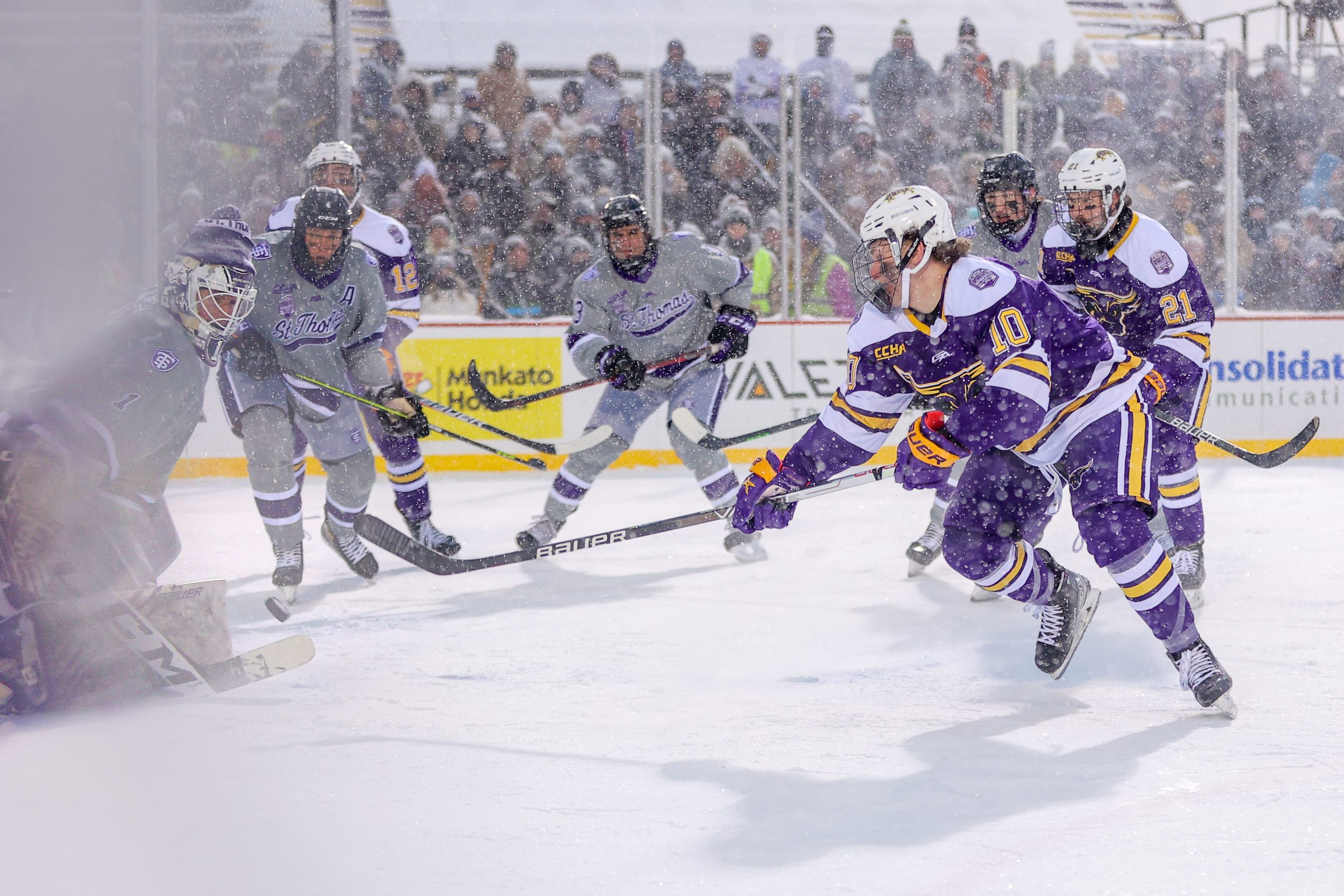 MANKATO, Minn. — The scene must have looked picture-perfect on the TV broadcast, with the big snowflakes falling to the ice and the Minnesota State fans in attendance roaring after each Mavericks goal showing what little affect the cold seemed to have on them.

They were warmed by David Silye’s hat trick to lead No. 2 Minnesota State past St. Thomas 7-1 in Saturday’s Hockey Day Minnesota main event on the football field at Blakeslee Stadium in snowy Mankato to complete a weekend sweep of the Tommies.

“It was a challenge (to stickhandle and pass),” Silye said. “But most of us grew up playing on the outdoor ponds. It was such a cool moment to go back into our childhood and we kind of had to simplify the game.”

Thousands of fans crowded the home-side concrete football stands behind the player benches and the temporary aluminum bleachers that lined the far-side of the rink. Students from each university, plus MSU’s “Maverick Machine” pep band piled into the bleachers behind one goal, within shouting distance of each other which allowed the sides to hurl insults back-and-forth.

A climb to the top of the football bleachers to peer over the edge would reveal a thousand more fans below wandering around a makeshift village lined with food, beer and clothing vendors surrounding fans huddled around fire pits as kids slid across the mini hockey rinks.

Despite the cold and MSU’s widening lead, the stands remained mostly full into the third period.

And while it was the players who got the Mavericks fans on their feet to sing “Ole! Ole! Ole!” after each goal, the shovelers on the ice crew became the stars of the show as the game went on and the snow fell heavier.

The ice crew was led by Mat Hennen and Arena Warehouse of Alexandria. The crew arrived in Mankato on Jan. 16 to begin construction on the rink.

“We were prepared for the snow, but the volunteers are saving us tonight,” Hennen said of the shovelers.

The shoveling crew, much of which was manned by members of high school hockey teams, struggled to get the heavy snow to the Zamboni door and off the ice, where it was loaded into a skid loader bucket and hauled away as players on both benches gave enthusiastic stick taps the volunteers.

“The guys on the bench were talking about how it looked like the shovelers were starting to get gassed,” MSU coach Mike Hastings said. “They were tired and you could see it. The players were so appreciative of what they were doing.”

The Mavericks were well on their way to completing the lopsided victory but, for a moment, the snowy ice surface took its typical toll on a hockey game by slowing the puck and the overall pace.

The evidence was in the powder the puck would kick into the air and the trail it would leave in its wake as it scooted along, resulting in passes that sometimes failed to make its destination. That can often even the playing field and hurt the more-skilled team, in this case MSU, and it almost resulted in the Tommies sneaking their way back into the game.

The Mavericks took an early 2-0 lead on Silye’s first two goals, but St. Thomas came back with a goal by Tom Piechowski two minutes into the second period. Just a few minutes later, the Mavericks misplayed a puck at the blue line and Piechowski took it the distance on a breakaway, but his wrister for the potential tying goal rang off the post.

“The energy changed a little bit when they made it 2-1,” Hastings said. “Then they come down and ring one off the post. Momentum is a crazy thing. They don’t get one and then we find a way to get the two-goal lead again.”

The Mavericks capitalized off the Tommies’ missed opportunity and rattled off five unanswered goals, ending with Silye’s hat trick-clinching goal nine minutes into the third period.

“This kind of hockey, playing in the winter outside, was special and we tied it all in,” Silye said. “As challenging as [the snow] was, I don’t think we would’ve changed it for any other weather.

“Coach Hasty made sure we soaked it all in and appreciated what was going on. It’s a once-in-a-lifetime opportunity.”