The Tourney: Day One 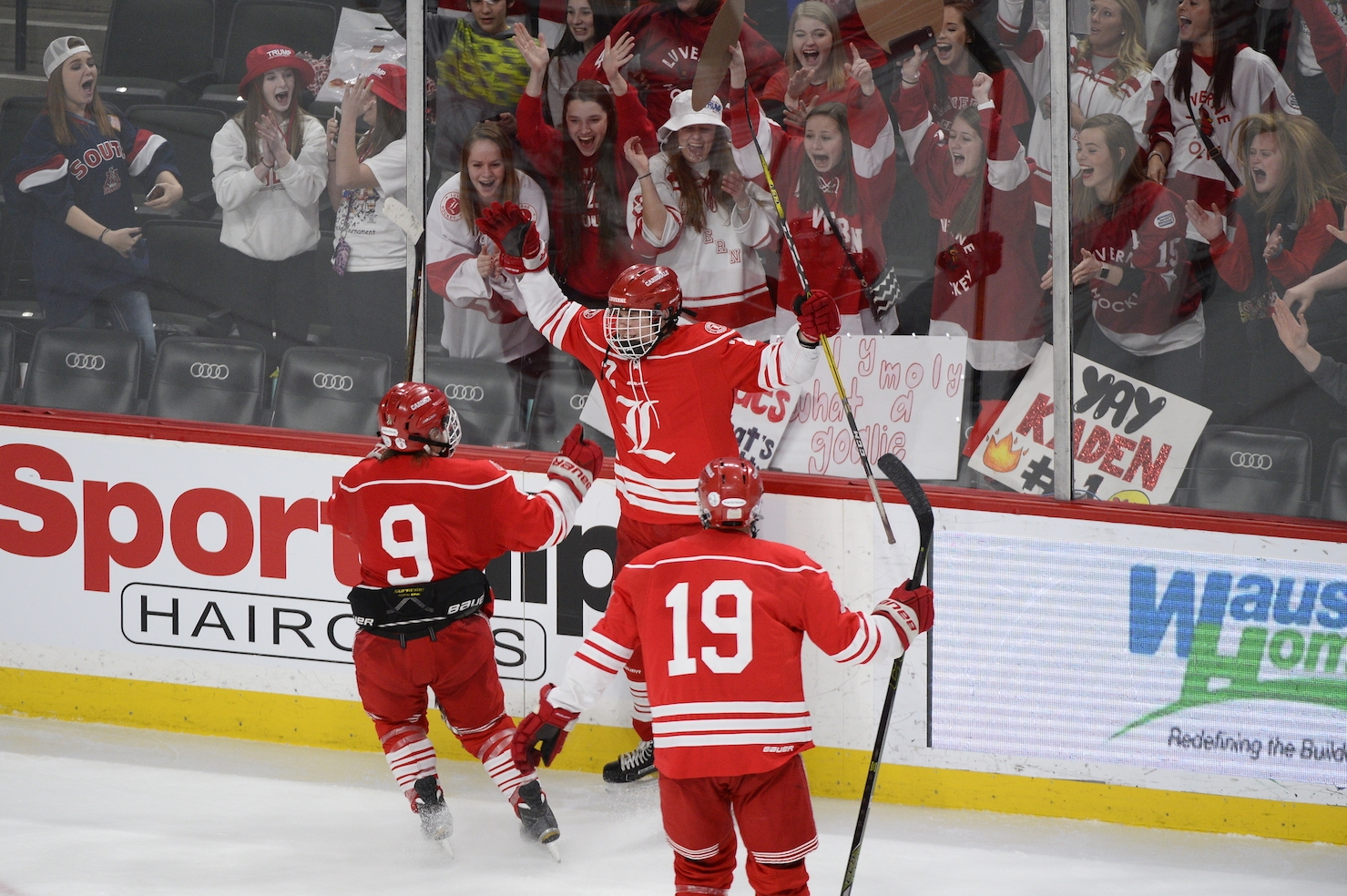 The 2017 Minnesota Boys’ State Hockey Tournament got underway on Wednesday at Xcel Energy Center with Class 1A quarterfinal action and a pair of opening-session bracket busters and a near miss. Delano and Mahtomedi, the tournament’s No.2 and No. 3 seeds, were sent packing by unheralded first-time participants Monticello/Annandale/Maple Lake and Northfield, respectively. Top seeded Hermantown got a scare from a plucky Luverne team and St. Cloud Cathedral pulled away from East Grand Forks.

No. 2 Delano vs. Monticello/Annandale/Maple Lake

Unseeded Monticello/Annandale/Maple Lake (22-6-1), in its first-ever state tournament game, toppled second-seeded, and fellow first timer, Delano, shocking the Tigers (24-4-1) with a 3-2 win to advance to a state semifinal meeting with surprising Northfield.

With the game knotted at 1-1 late in the second period, the Moose struck twice in less than two minutes with a pair of special teams goals to give MAML a stunning two goal lead at the break. Nick Zwack finished off a shorthanded 2-on-1 break with Ben Ward for his second goal of the game at 13:11 to give the Moose the lead for good. The assist was one of three in the game for Ward.

Just 1:57 later, Troy Dahlheimer took advantage of a costly Delano too many men on the ice penalty to punch in a power-play goal.  Special teams proved to be the difference as the Moose held the vaunted Delano power play to no goals and five shots on three attempts in addition to Zwack’s shorthanded tally.

MAML goaltender Tyler Klatt made 24 of his 33 saves through two periods. After Delano’s Justin Daly pulled the Tigers back within one just 41 seconds into the third, Klatt withstood Delano’s late surge with the extra attacker. Delano’s Jackson Hjelle turned aside 26 Moose shots for the Tigers.

No. 3 Mahtomedi vs. Northfield

Northfield goaltender Ryan Bielenberg did not know a lot about Mahtomedi heading into their quarterfinal clash with the Zephyrs but he did say Monday night he thought the teams were pretty similar, “They have a good goalie and they have a deep team and that’s kind of what we have too.”

Bielenberg’s words proved prophetic as the teams went toe-to-toe on Wednesday afternoon with Northfield advancing to the state semifinals with a 3-1 win over the Zephyrs. Nicholas Kvernmo scored the game winner 1:04 into the third period and added an empty-net goal to seal it with 1:08 to go. Bielenberg made 13 of his 34 saves in the third period and the Raiders blocked 12 shots to stymie Mahtomedi’s attack led by Luke Posner and Matt Vannelli.

All-Hockey Hair Team candidate Dallas Duckson opened the scoring for Mahtomedi at the 4:20 mark of the first period and the Zephyr lead stood until midway through the second. That’s when Northfield’s Jacob Halvorson tied it up at 7:57 to set up Kvernmo’s third-period heroics.

No. 1 Hermantown vs. Luverne 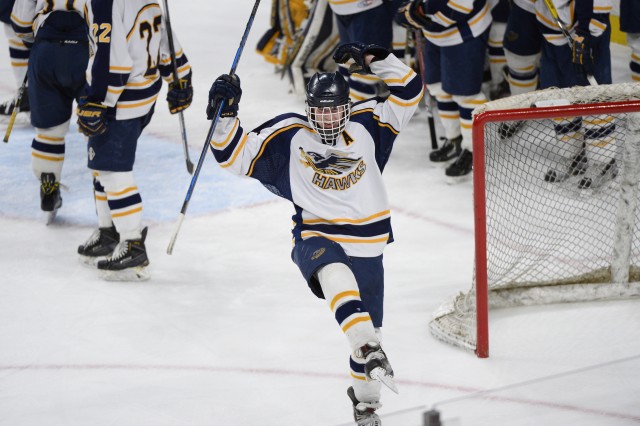 “I was sick to my stomach all afternoon,” Plante said. “It scared the [crap] out of me.”

It didn’t get any better for Plante as Luverne’s Tyler Reisdorfer scored his second goal of the game with 2:08 remaining in regulation to complete the unseeded Cardinals’ comeback from a two-goal, second-period deficit and force overtime.

“When they scored that second goal I’ve never heard it that loud in here for any game I’ve played before,” Hermantown forward Ryan Sandelin said. “So they definitely had the crowd behind them.”

All alone in front of the Cardinal net, Kolquist patiently outwaited Ericson before tucking the puck behind the sprawling goaltender.

“Jessie (Jacques) gave me a perfect pass right to the back side and there was nobody by me so it made it a lot easier to put the puck in the net,” Kolquist said. “I usually don’t get that much time.”

Ericson turned aside 49 Hermantown shots including 33 of them through two periods, leaving the frustrated Hawks clinging to a one-goal lead.

“As the game went on and that goalie kept stoning us, then we started playing a little bit out of character, trying to do too much,” Plante said. “Which is kind of what happens in games like this.”

After a scoreless first period, Hermantown’s Tyler Watkins opened the scoring at 1:44 of the second and Sandlein doubled the lead just past the 14-minute mark. But Reisdorfer pulled Luverne back within a goal just 1:52 later and the Cardinals had their sights set on becoming the third unseeded team of the day to advance to Friday.

“There’s not much you can do when you run into a hot goalie,” Sandelin said. “It’s just sort of like you’re shooting at a brick wall. Hats off to their goalie because he played unreal.” 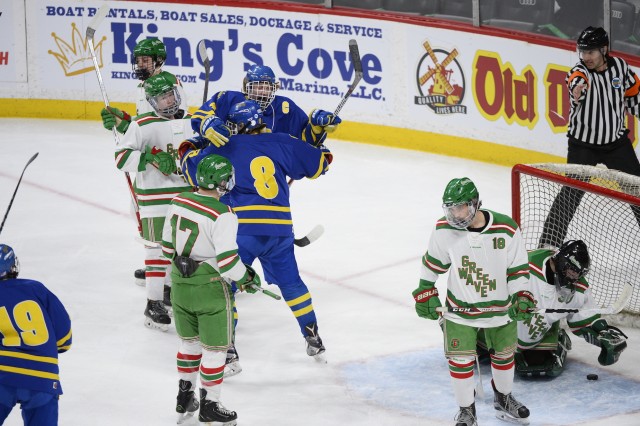 The day’s final matchup came with a guarantee a seeded team would be making the trek to Mariucci Arena on Thursday simply because each team was seeded. It also marked the third time in four games the high seed would fall.

Jake Van Halbeck scored twice and added a pair of assists, including a pretty setup of Nate Warner’s first-period goal, to lift St. Cloud Cathedral to a 6-3 win over East Grand Forks and a semifinal matchup with top-seeded Hermantown on Friday afternoon.

“We spoke earlier in the week about getting shots,” St. Cloud Cathedral coach Derrick Brown said. ‘”[East Grand Forks] only gave up 25 shots in their entire section playoff so for us to put [37] on the board I think really spoke to our speed and depth.”

Reagan Garden’s long, flowing locks gave him the strength to score a pair of goals while Michael Spethmann chipped in a goal and two assists. Goaltender Jake Levinski backstopped the Crusaders to the semifinals for the first time since 2014 with 21 saves.

The Green Wave struck first on Cody Wolff’s goal 3:23 into the contest less than a minute after East Grand Forks finished killing off a 1:42 Cathedral 5-on-3 advantage. Green Wave goaltender Tucker Brown made a critical six of his 31 saves on that penalty kill.

But the boost was short lived and Cathedral stormed back and went up 3-1 on Van Halbeck’s shorthanded goal at 2:03 of the second period. East Grand Forks goals by Casey Kallock and Hunter Olson sandwiched around Spethmann’s goal twice cut the deficit back to one at 4-3 after two.

“We were chasing the game from the drop of the puck,” East Grand Forks coach Scott Koberinski said. “I can’t compliment [St. Cloud Cathedral] enough. I thought they did an outstanding job and our guys just couldn’t match the intensity that they had tonight.”

But Garden’s second of the game at 1:35 of the third restored the Crusaders’ cushion for good with Van Halbek’s empty-net goal providing the final margin.