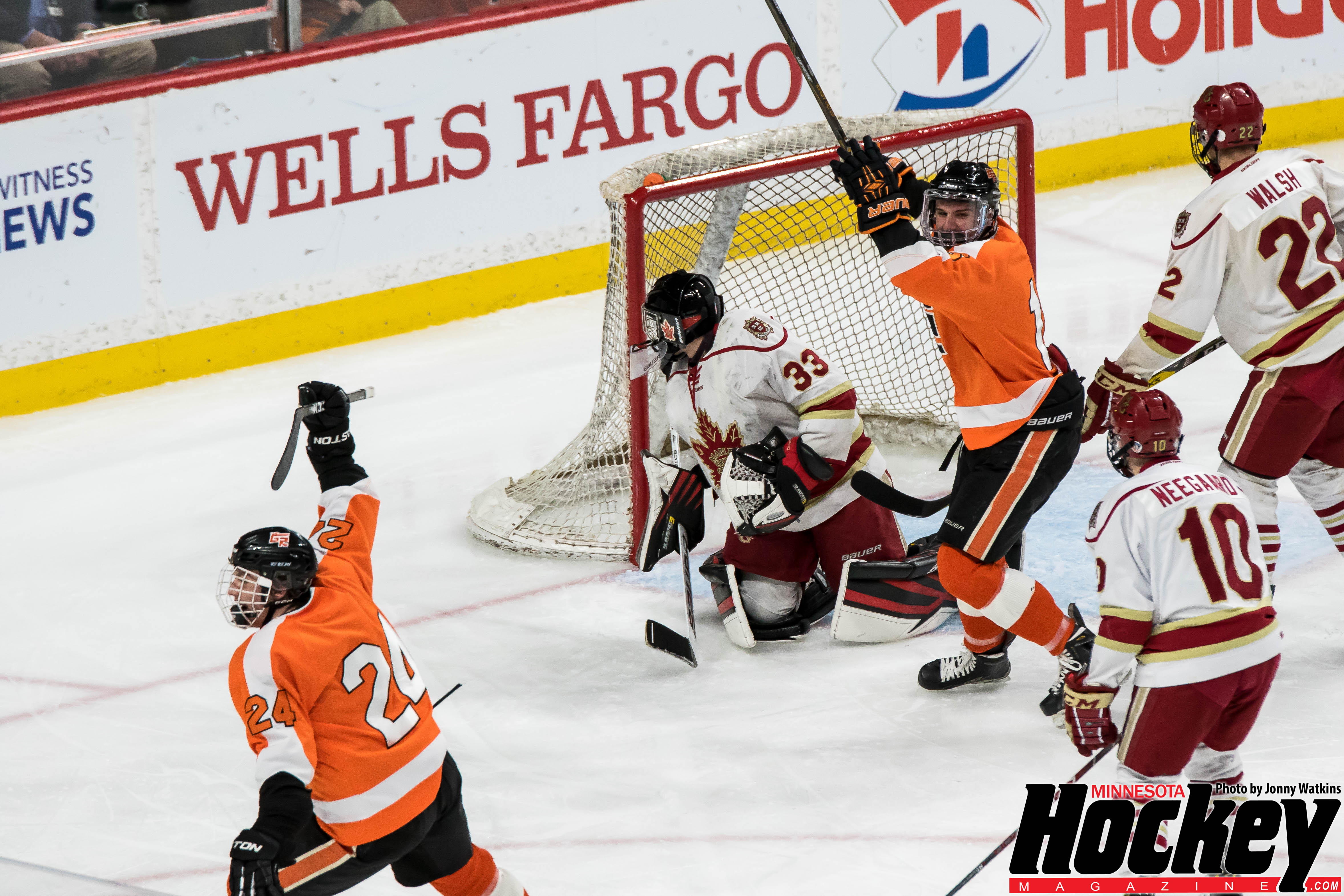 After a day of upsets and a near miss in Class 1A, another high seed fell to open the Class 2A tournament when unseeded Lakeville South stormed back from a one-goal deficit to knock off St. Thomas Academy. Moorhead, on the other hand, became the first seeded team to take care of business in regulation with its win over Hill-Murray.

No. 1 Eden Prairie survived a scare in the evening session from unseeded defending champion Wayzata with a late rally. Goals came in bunches in the late game in a Grand Rapids comeback win over Maple Grove. See below for more.

Emotions ran high, especially early on in the Class 2A tournament’s opening quarterfinal clash between the Cadets and the Cougars. Having last qualified for the state tournament in 2012, Lakeville South brought no tournament experience to the contest while St. Thomas Academy returned four players from its inaugural Class 2A entry in 2015. 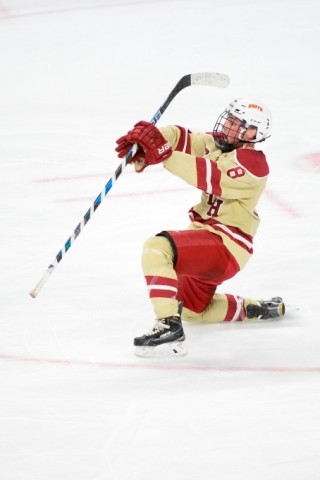 Whether that experience edge was a factor or not, the Cadets (23-5-1) jumped all over the Cougars in the opening moments, scored the game’s first goal and outhsot Lakeville South 17-4 in the first period. But the Cougars (19-9-1) rebounded for a 5-2 win, their first in the state tournament since Justin Kloos led them to a 2-1 third-place game win over Moorhead in 2012.

Lakeville South’s Cory Checco, William Moore and Bradley Golant each had a goal and an assist and goaltender Isaiah DiLaura weathered that first-period St. Thomas Academy barrage to finish with 31 saves.

“We knew they were gonna come out strong and everyone was gonna have big emotions,” DiLaura said. “I just tried to channel my emotions and just stop every first shot and make every save that I could.”

Ray Christy, one of the Cadets’ four tournament returnees, got STA on the board first just past the halfway point of the opening period at a time when the Cougars were playing firmly on their heels.

“We started out nervous because none of us had been there before and it’s kind of a glorious experience, I want to say,” Checco said. “Once we kept getting the puck down deep and forechecking their forwards the way that we usually do when we play, I think we took over the game.”

Checco’s goal at the 12-minute mark of the first drew Lakeville South even on the scoreboard but, more importantly, it gave the Cougars a much-needed confidence boost.

“From there we just took it and ran with it because we just wanted it more,” Checco said. “I felt like after we got that first one, we got the first jitters out of the way.”

Despite the huge disadvantage in shots, Lakeville South coach A.J. Bucchino felt like his team was in good position tied 1-1 after the first period.

“It was a great situation, it was a two-period hockey game after that,” Bucchino said. “As a coach we just try to keep our composure and remind these guys to keep it simple and keep moving and, as you know, in sports anything can happen.”

What happened was Jack Olsen gave Lakeville South the lead 4:55 into the second and Checco set up Dawson Klein for the eventual game winner just 47 seconds later. It took STA’s Brenden McFadden only 26 seconds to pull the Cadets back within a goal at 3-2 but that’s as close as St. Thomas Academy would get.

Moore’s goal with 3:26 to play sealed it for the Cougars and Golant added an empty netter in the final minute. 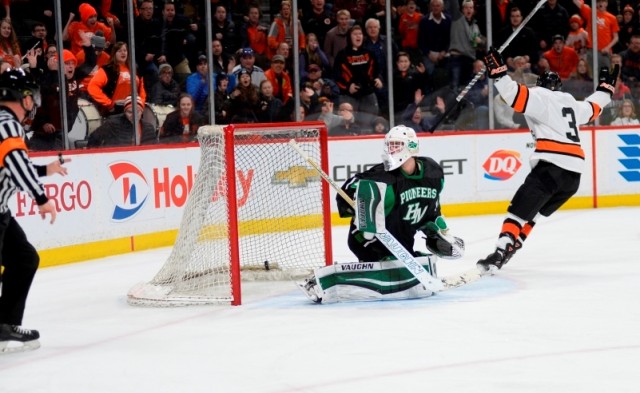 Moorhead’s Matt Herbranson celebrates what would be his game-winning goal in the Spuds’ 4-2 win over Hill-Murray. (Photo by Tim Kolehmainen/Breakdown Sports USA)

Moorhead scored three times in the last half of the second period to create the separation it needed in a tight battle with the Hill-Murray as the Spuds advance to the state semifinals with a 4-2 Class 2A quarterfinal win over the Pioneers.

Moorhead (23-3-3) will face Lakeville South in the early game on Friday night in a rematch of the 2012 state tournament third place game, the last time each school played in a state semifinal.

Back-to-back power plays late in the second breathed life into Hill-Murray (19-6-4) as Derrick Breezee scored on the first one to make it 3-2 Spuds. But after the Moorhead bench was penalized for too many players on the ice, the Spuds’ Jack Steeze sucked the wind out of the Pioneers with an unassisted shorthanded tally to make it 4-2.

Moorhead turned it up a notch in the third period, outshooting Hill-Murray 15-6 for a 38-26 advantage in the game. The teams combined for an astounding 32 blocked shots in the hard-fought contest.

No. 1 Eden Prairie vs. Wayzata 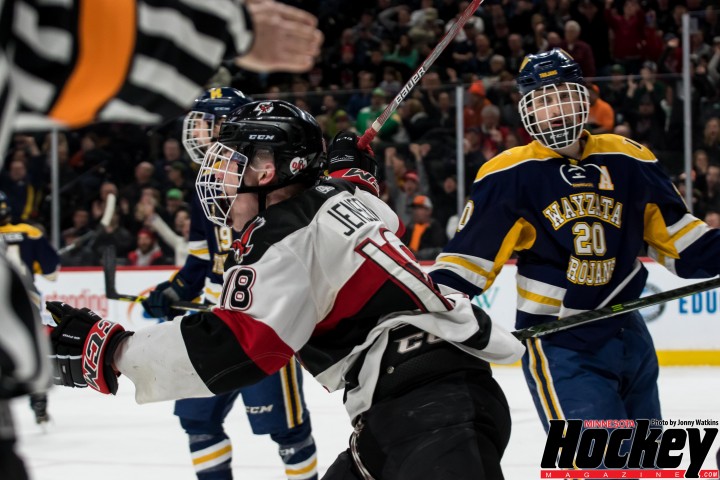 Nicky Lievermann’s goal with 1:22 remaining capped off a third period comeback and lifted top-seeded Eden Prairie to a 3-1 Class 2A quarterfinal win over defending champion Wayzata.

Mittelstadt, who spurned offers from the Gophers and the USHL to return to the Eagles for his senior season, won a faceoff back to Lievermann at the left point who fired a shot through traffic that beat Wayzata goaltender Reid Waszczenko.

Eden Prairie (22-4-2) was also the favorite a year ago when it lost 5-3 to Wayzata (10-18-1) in the 2016 state championship game. The expectations were even higher on Thursday facing a team that rallied in the section playoffs after posting a seven-win regular season.

Wayzata led 1-0 with less than seven minutes remaining when Eden Prairie defenseman Noah Deraney’s one-time blast from the right point deflected off Trojans’ forward Tyler Stevens and over Waszczenko to tie the game at 1-1 at 10:31 of the third period. The goal was Deraney’s first of the season.

“I had a chip on my shoulder from last year,” Deraney said. “I just wanted to go out there and just contribute to the team any way I could. It’s a good way to start.”

The goal celebration was a mixture of joy and relief.

“The biggest thing was to keep playing like we were,” Eden Prairie coach Lee Smith said. “We were having great opportunities, we just weren’t getting a lot of second chance opportunities because the goalie was doing such a good job and they were boxing out really well.”

Waszczenko was outstanding throughout and finished with 35 saves including a memorable pair in the opening period, stoning Mittelstadt on a nifty deflection seven minute in and Jensen with a quick left pad five minutes later.

The late-game rally may never have happened if not for Eden Prairie goaltender Nick Wiencek’s third-period heroics. Despite facing just 15 shots, Wiencek made perhaps the game’s biggest stop with under 10 minutes to play, thwarting Wayzata’s Griffin Ness after the Trojans forward stepped around both Mittelstadt and Sam Pajor in the slot.

“As a coach, all you can do is rally and you’ve got to rally that, ‘This guy just made the save that saved our season,” Smith said. “And our guys became Warriors and played even harder down the stretch.”

After a scoreless first period, the Trojans struck first when Grant Anderson picked his corner with a laser of a wrist shot that beat Wiencek’s outstretched glove 55 seconds into the second. But that’s all the Wayzata offense could muster against the star-studded Eagles.

“We teach our kids to play three zones so pucks are hitting us,” O’Leary said. “It’s one of those deals where we block 20, or whatever you said, but two hit us and went in our own net so it’s the nature of the beast.” 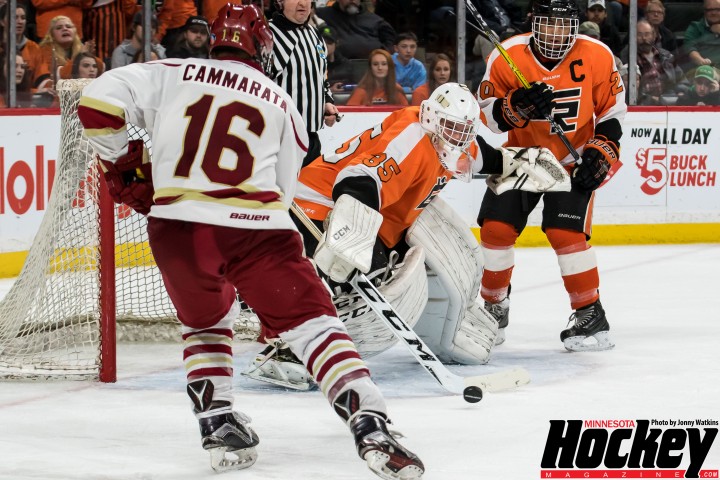 In stark contrast to Thursday night’s early game between Eden Prairie and Wayzata, goals were anything but hard to come by in the nightcap.

Grand Rapids exploded for four second-period goals, including three within 2:41, to turn a one goal deficit into three-goal lead and the Thunderhawks rolled to a 6-4 Class 2A quarterfinal win over Maple Grove.

Trailing 2-1 after one period, Grand Rapids got goals from John Stampohar, Jack Burnson Drake Anderson and Blake McLaughlin, the final three in short order, to carry a 5-2 lead into the final period.

“We like to play better when we’re down a couple goals, for whatever reason,” Grand Rapids coach Trent Klatt said. “We’re certainly not trying to put ourselves in a hole but we’re not worried when we get behind a couple goals because we can score.

“It would just keep me from having a heart attack on the bench if we would just start at the beginning of the game.”

McLaughlin scored twice to lead a quintet of Thunderhawks with two points including Gavin Hain and Burnson with a goal and an assist and Michael Heitkamp and Micah Miller with a pair of assist each. Goalie Zach Stejskal turned aside 25 Maple Grove shots for the win.

Sam Huff’s three-point night (1-2–3) led the way for Maple Grove while Justin Kelley added a goal and an assist. Crimson goaltender Ethan Haider made 30 saves in a losing cause.

Things looked dire early on for the Thunderhawks as Maple Grove’s Trevor Kukkonen scored just 20 seconds into the contest and the Crimson led 2-0 at the 4:26 mark on Huff’s goal. Maple Grove had nine of the game’s first 10 shots and appeared to be in control.

But Gavin Hain’s goal at 11:32 of the first gave Grand Rapids life as it headed to the first intermission down by just a goal.

“Once we pumped that second one in, I mean the floodgates kind of opened up,” McLaughlin said. “We started finding twine and it was a fun comeback.”

Kelley’s goal closed the gap just 18 seconds into the third but McLaughlin’s second of the game restored the cushion. The Crimson wasn’t done yet, however, as Jayden Walsh made it 6-4 with just under eight minutes left in regulation.