The WCHA weekend ahead 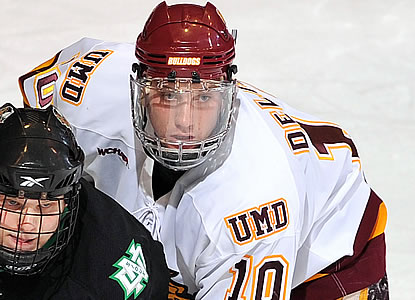 Dan DeLisle scored his first goal of the season–and seventh of his career–in UMD’s 3-1 win at Notre Dame on Thursday night. (photo: WCHA.com)

The WCHA has a full slate of action on tap on the women’s side tonight while Wisconsin is the only men’s team not taking the ice this weekend. With the exception of the Minnesota series at Michigan Tech, the remaining nine men’s teams will be facing non-conference opponents, including tonight’s North Dakota/Alaska-Anchorage matchup.

Although UND and the Seawolves are conference foes, they are facing each other to open the annual Alaska Goal Rush tournament hosted by Alaska-Fairbanks. North Dakota will face the Nanooks tomorrow night when UAA takes on Merrimack.

The UMD men, by the way, got their weekend started early with a 3-1 win at Notre Dame last night behind goals by Cal Decowski (Andover), Dan DeLisle (Arden Hills), and Justin Crandall (Lakeville) while goaltender Matt McNeely (Burnsville) made 29 saves in his collegiate debut.

The women, on the other hand, will all be engaged in conference games this weekend. Here’s the weekend schedule for both men and women: