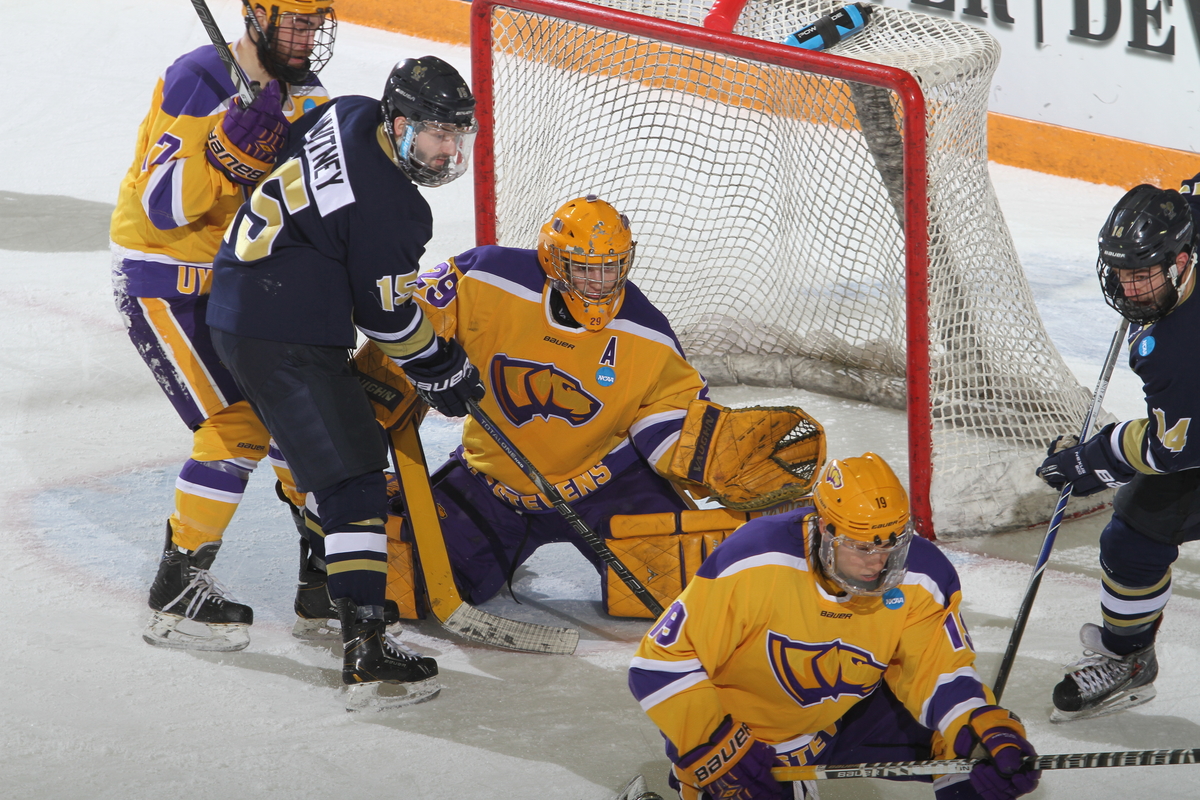 Minneapolis — While no Minnesota team played at the recent NCAA Division III Frozen Four in Minneapolis, three players returned to their home state in competing for a national title.

One of them, Brandon Jaeger, nearly took his team the distance. The former Champlin Park Rebels hockey standout led the University of Wisconsin-Stevens Point to the national title game on Saturday, March 28.

Jaeger, UWSP’s all-time winningest goaltender, made it tough for opponents to score all season with a .914 save percentage and a 2.20 goals allowed average. The Pointers made their second-straight appearance in the championship game but game up short again in a 5-2 loss against Trinity College (Conn.) at Ridder Arena.

Jaeger helped the Pointers stay close trailing 3-2 before the Bantams put the game out of reach with a couple of empty netters. The senior goalie ended his stellar career with 63 wins and signed a pro contract the following day with the Missouri Mavericks of the East Coast Hockey League.

“Brandon’s preparation and attention to detail, everything that he does is what separates him from being a good goalie to being a great goalie,” Pointers coach Chris Brooks said. “There’s a lot of stuff behind the scenes that people just don’t see that played a big part in his success.”

Jaeger drew some extra fans for the strong Pointers fan contingent with Champlin being just 25 minutes from the University of Minnesota. The Pointers played out east for the Division III final last year.

“It’s really special having the support that we do,” Jaeger said. “This tournament being so close to our hometown and Stevens Point, it’s been a great experience.” 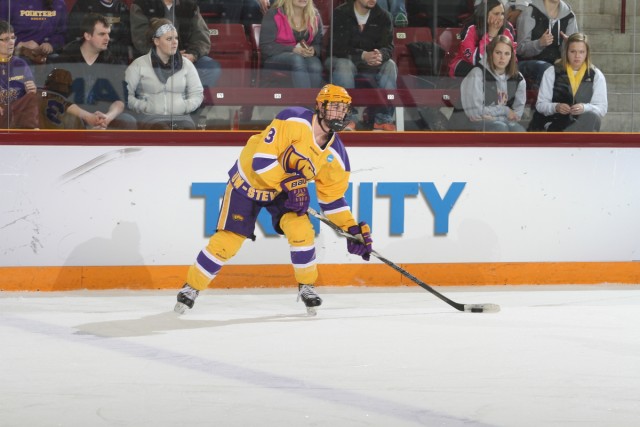 “It was unbelievable to be playing at the U,” Bittner said. “They have top-of-the-line people, staff and facilities there, and it was a blessing to play close to home. It was just a bus ride away instead of a flight all the way out to Maine last year.”

Bittner had a long journey though in bouncing back from injury last season and making this year’s roster. His offseason training paid off with a successful sophomore season playing regular shifts on defense.

“It took him a year to develop,” Brooks said. “That development, he used it the right way. He was a huge, huge part of our team this year”

When Jaeger and Bittner took the ice for the Pointers in the Frozen Four semifinal on Friday, March 27, it became a mini Minnesota get together with another native on the opposing side. Brooklyn Park native Thomas Lindstrom helped get things going for Amherst College (Mass.) with an assist on the first goal of the game. The former Breck hockey standout had 15 points overall going into the Frozen Four as a freshman.

“He played an important role for us all year-long,” Lord Jeffs coach Jack Arena said of Lindstrom. 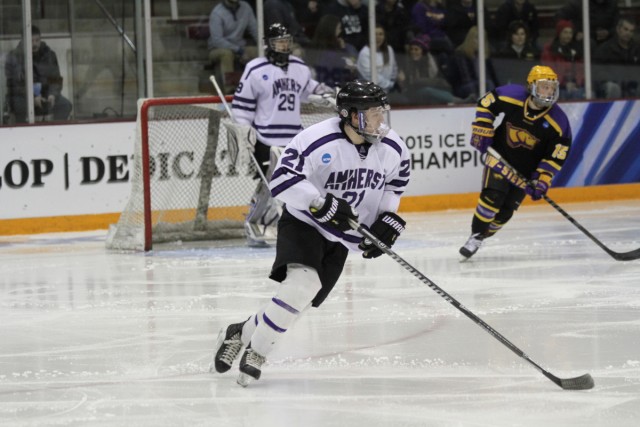 With an assist in Amherst’s national semifinal loss to UW-Stevens Point, Brooklyn Park’s Thomas Lindstrom tallied 16 points (5-11—16) as a freshman for the Lord Jeffs. (Photo by Ryan Coleman, d3photography.com)

Lindstrom helped Breck reach three Class A state tournaments during high school. He went on to play junior hockey for a year before going to Amherst.

Minnesotans playing for Amherst has been anything but an anomaly. Arena has brought in many players from the State of Hockey. That’s included players from Edina, Minnetonka, Breck and Blake.

“Pretty much every year, we’ve had a few in the program,” Arena said. “This year, is just one, which is actually very low for us.”

Being on the east coast and near Canada gives Arena plenty of hockey talent to draw from of course, but he sees several things that standout with Minnesota players.

“They usually have a pretty good skill level,” Arena said. “We’ve had some of our best players come from here.”

While Lindstrom gave Amherst an edge early, UWSP ultimately prevailed with a five-goal third period.   Though the loss made for a brief and disappointing trip, Lindstrom likewise enjoyed the homecoming as his UWSP counterparts did with family and friends in the stands.

“It was a lot fun to play in front of them,” Lindstrom said. “Unfortunately, we couldn’t get it done, but I have to thank them for coming out and supporting me.”