This Day In MN Hockey History

1967:  MN North Stars and St. Louis Blues played their first NHL games, and tied 2-2 at the St. Louis Arena.  Larry Keenan scored the first Blues’ goal, while Bill Masterton made history for the North Stars with the club’s first tally coming at 15:20 of the second period.

1968:  Defenseman Larry Hillman scored a goal and added two assists to lead the North Stars to a 5-1 win over the Seals at Oakland.

1969:  Tommy Williams became the first Minnesota-born player to score a point for the North Stars, with an assist just 1:08 into his first game with Minnesota, a 4-0 win over the visiting Flyers.  Cesare Maniago got the shutout, the 10th of his NHL career.

1972:  J.P. Parise scored a goal and three assists, and Dennis Hextall added three assists to lead the North Stars to a 5-2 win over the California Seals at the Met Center.

1980:  For just the second time in NHL history a 40-or-older player scored against a teenage goaltender, when 40-year-old Dave Keon scored against 19-year-old goalie Don Beaupre in a 9-3 Whalers’ loss to the North Stars, in MN.  Ron Zanussi scored two goals and an assist, and Mike Eaves and Glenn Sharpley each had a goal and two assists to lead the North Stars to victory.

1986:  Minnesota’s Kent Nilsson set an NHL record for fastest opening goal from the start of a a season — just ten seconds into a 4-4 North Stars tie against the Nordiques in Quebec City.

1986:  Jim Johnson picked up three assists, and Doug Bodger scored the winning goal at :50 of OT as the Penguins were credited with the 350th home victory in franchise history, 6-5 over the Rangers.

1990:  Minnesota’s Mike Modano scored a goal and two assists as the North Stars came back from a 3-0 deficit to tie Boston 3-3 at the Met Center.

1996:  Toronto obtained Darby Hendrickson from the New York Islanders, in exchange for a conditional pick in the 1998 Entry Draft.

2000:  The Minnesota Wild played its first home game before a standing-room-only crowd in the new Xcel Energy Center, in St. Paul Minnesota.  The Wild played the Philadelphia Flyers and skated to a 3-3 tie.  Darby Hendrickson and Wes Walz each scored as the Wild picked up a tie in their first regular-season home game. (Hendricksons 1st goal at X-Cel was the #2 ‘moment’ in the Wild’s top ten of the decade 2000-2010). 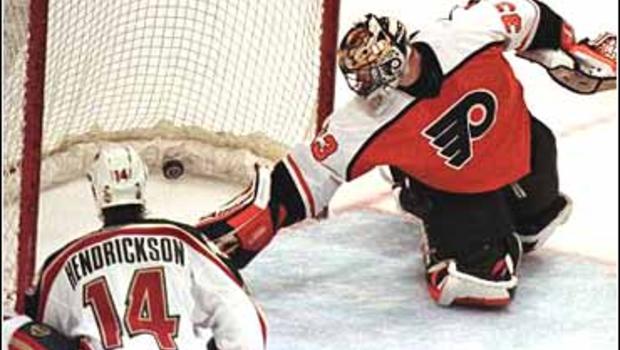 2000: At the Wild home opener, the Minnesota Wild retired jersey #1 in honor of the fans who helped bring back the NHL.

2000: Flag Bearer, Ashley Duffey, becomes the first girl to skate at the Xcel Energy Center while leading the Wild onto the ice for the very first time.

Kyle is the webmaster/owner of Vintage Minnesota Hockey and a Minnesota hockey player and fan,.

More in This Day In MN Hockey History