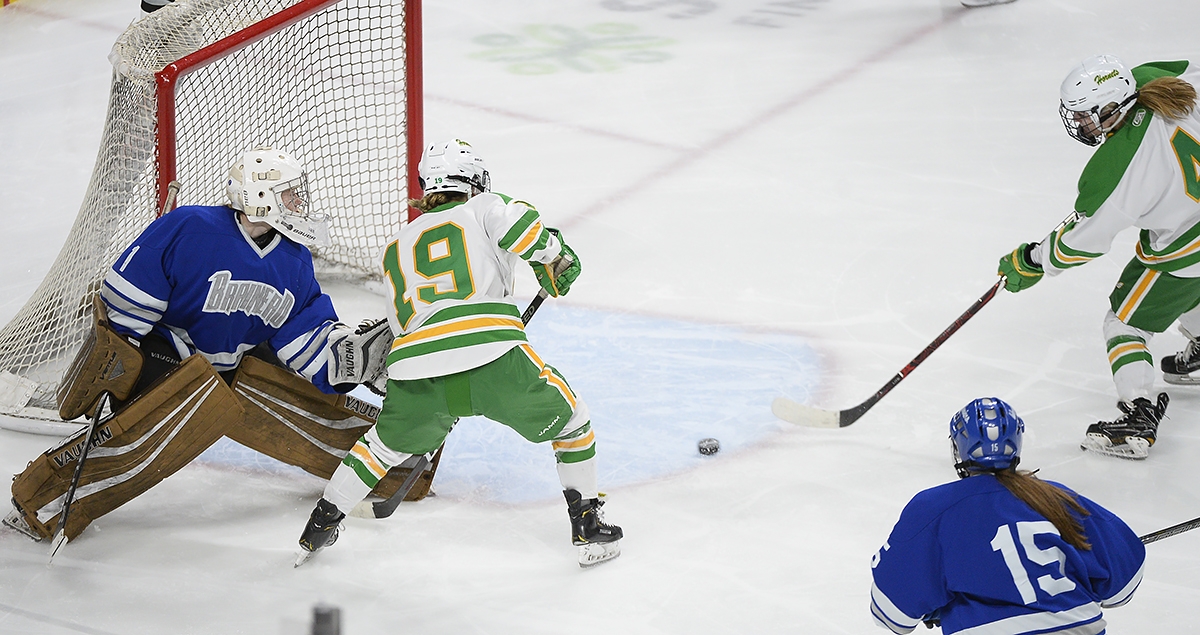 With teammate Tella Jungels (19) looking on, Edina’s Olivia Swaim (4) pounces on a rebound of a Vivian Jungels shot and puts it past Brainerd goaltender Olivia King for the game-winning goal in the second overtime of the Hornets’ 4-3 Class 2A state tournament championship game win over the Warriors on Saturday night at Xcel Energy Center. (MHM Photo / Tim Kolehmainen – Breakdown Sports USA)

After more than 60 minutes of exhausting end-to-end hockey, Edina (27-4-0) outlasted Brainerd/Little Falls (25-5-1) to claim its third straight Class AA state girls’ hockey championship. The Hornets’ Olivia Swaim scored on the team’s 55th shot of the game, 2 minutes, 20 seconds into the second overtime to give Edina a 4-3 victory.

On the game-winning play, freshman defenseman Vivian Jungels held in a Brainerd clearing attempt and threw a shot on net. Racing out of the corner, junior Tella Jungels screened Brainerd goaltender Olivia King, who still kicked out a leg to make her 51st save of the night.

But the rebound trickled up the slot right to the stick of Swaim, who buried it into the open net, setting off a wild celebration.

An exhausted Swaim threw her arms around Tella Jungels in relief, while the rest of the Hornets sprinted off the bench and plowed into the pair. On the bench, coach Sami Reber held her head in her hands, a disbelieving smile on her face.

“You just have to give it your all every shift, because you just never know,” said Swaim.

The victory may have seemed pre-ordained to many, as the Hornets were the two-time defending state champions and the high-powered top seed in the tournament. Their puck control was strong throughout the game, as they outshot the Warriors 55-20. But the plucky Warriors proved tough to solve.

Edina had to rally from a one-goal deficit three different times to earn the victory.

After Cheyenne Abear opened the scoring for Brainerd less than two minutes into the game, the Hornets’ Sophia Doll countered with a goal to tie it at 1-all. Later in the first period, Abby Pohlkamp scored for the Warriors, but Vivian Jungels wrapped in a power play goal to knot the score at 2-all after one period.

Emma Booth gave Brainerd a brief 3-2 lead early in the third, but Tella Jungels tied it up with 11 minutes remaining. All three Edina goals in regulation came on the power play, as the Hornets were 3-for-8 with the advantage.

The state title was Edina’s third in a row, tying Minnetonka (2011-13) for the most consecutive girls’ hockey championships.

“It’s hard to back up one state championship, but two is even harder,” said senior C.C. Bowlby, a Miss Hockey finalist who was part of all three championship runs for the Hornets.

“People doubted us from day one, but we never doubted ourselves,” agreed Reber, citing numerous detractors who had Blake ranked ahead of the two-time defending state champion Hornets.

Swaim, also a part of all three title teams, claimed the third championship was the most difficult. Not the least of which was because of the efforts of King and a rugged Warriors’ defensive effort.

King repeatedly stonewalled the Hornets, getting better as the game went along. She gave the Warriors the belief they could win the game according to head coach Jim Ernster.

“Her poise and her leadership were so tremendous,” said Ernster.

But the 55th shot proved impossible to stop.

“We made history, finally winning the first one two years ago,” grinned Bowlby. “To keep it going is just unreal. To do it my senior year and finish off with a win and a blue medal around my neck is unreal.”