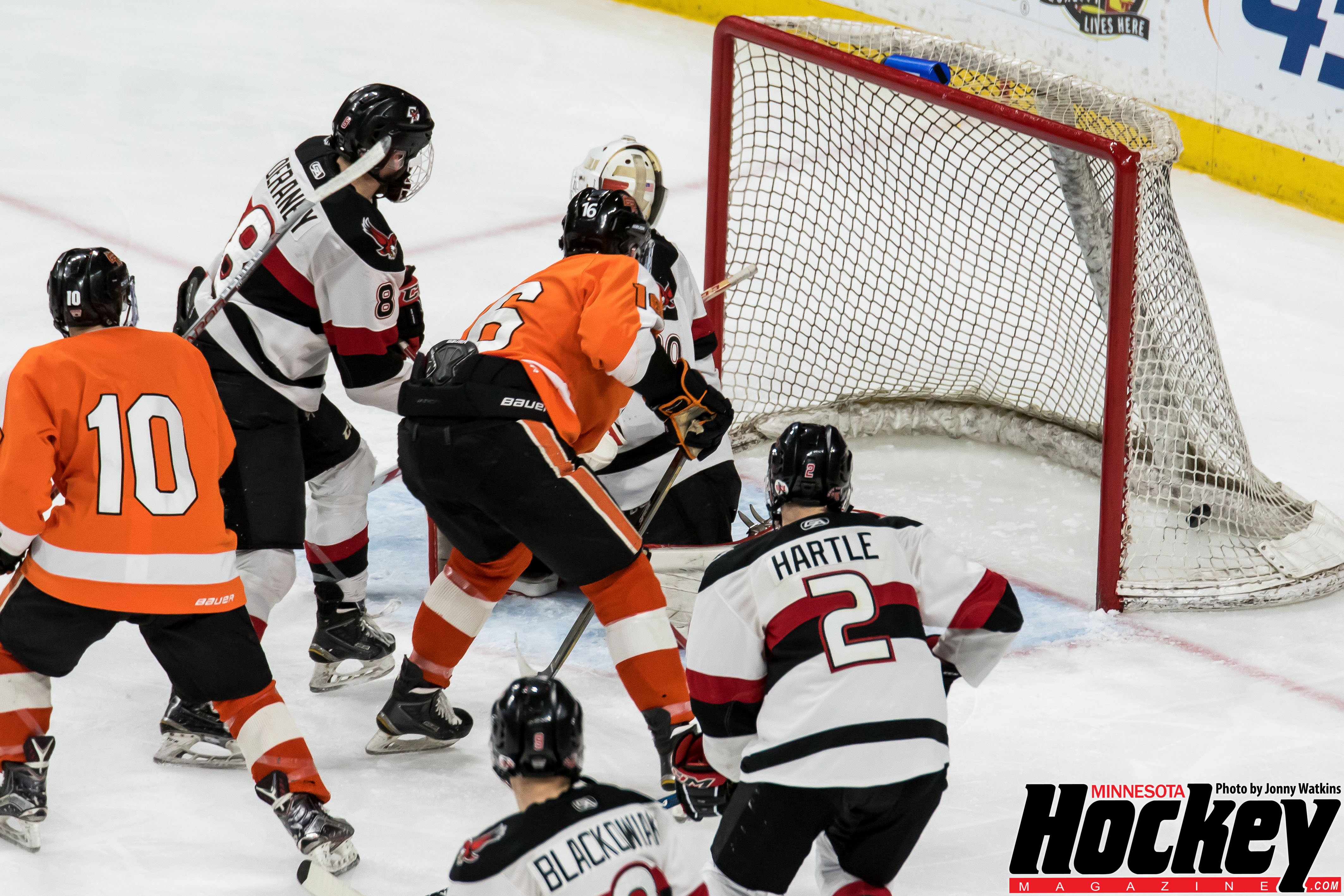 Grand Rapids forward Connor Stefan watches his game-winning goal hit the back of the net in the Thunderhawks’ Class 2A state semifinal win over Eden Prairie on Friday night. (MHM Photo / Jonny Watkins)

To his credit, Grand Rapids forward Keaghan Graeber was honest when asked about his role in the pretty play that set up the deciding goal in the Thunderhawks’ 3-2 Class 2A state semifinal win over Eden Prairie on Friday night at Xcel Energy Center.

Graeber’s pass from his rear end after he was spun to the ice by an Eagles defender in the right circle found linemate Connor Stefan barreling up the slot. Stefan slammed the puck behind Eden Prairie goaltender Nick Wiencek with 9:04 left in the third period and Grand Rapids held on to eliminate the top-seeded Eagles.

Did he see Stefan? No, Graeber says.

“I just knew that I needed to get the puck to the net because that’s what we’ve been working on all year,” Graeber said. “Luckily he was coming in hard.” 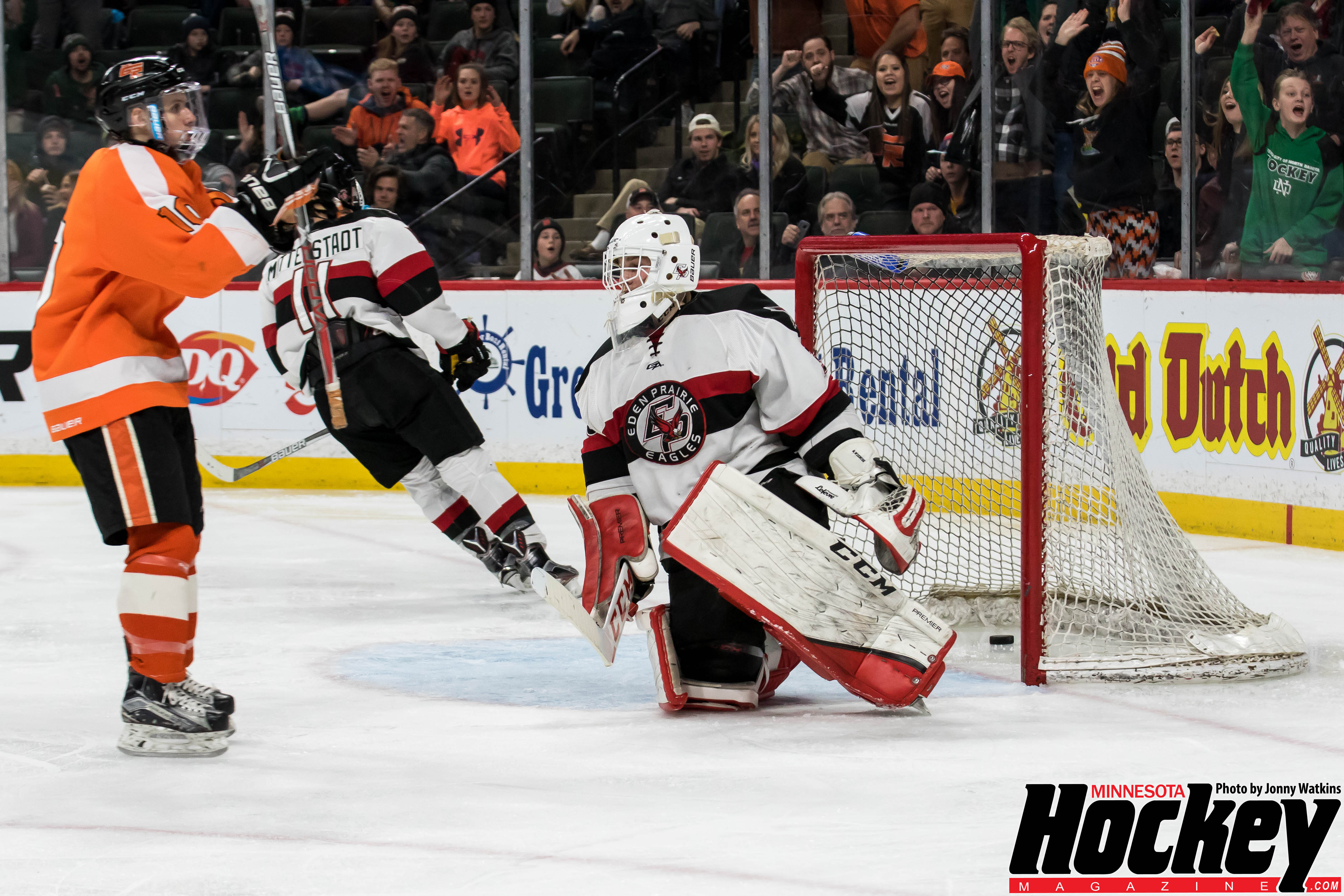 The loss ended the championship hopes of a senior-laden Eden Prairie team set on redemption after losing to Wayzata in the final a year ago. Much of the attention this season was centered on Eagles’ star forward Casey Mittelstadt and his decision to return for his senior year to make one more run at a title with his childhood friends.

“That’s a great hockey team that we beat tonight and we’re very fortunate to be on this side of the ledger,” Grand Rapids coach Trent Klatt said. “They’ve got a lot of great hockey players and there was not a lot of space. They were prepared for us.”

But the Thunderhawks had a bit of redemption on their minds too as the memory of last season’s 6-2 state semifinal loss to Eden Prairie remained fresh.

“I definitely think that the second-year players and the players that were on that team last year definitely had a little more extra drive than the upcoming kids because we lost to them last year,” Graeber said.

Eden Prairie jumped out to an early lead when  Ryan Lesko batted home the rebound of his shot from the right faceoff dot. Stjeskal stopped the initial shot but the puck bounced straight up in the air and Lesko was there when it came down to backhand it in at 5:15 of the first period.

John Stampohar tied it for Grand Rapids with a 5-on-3 power-play goal late in the first period when his backdoor pass from the left circle intended for Blake McLaughlin was inadvertently redirected behind Wiencek by Mittelstadt with 1:09 to go.

The Thunderhawks grabbed the lead early in the second when Stefan’s pass through the neutral zone missed its target and went right to Eden Prairie’s Nicky Lievermann. But the Eagles’ star defenseman whiffed on the puck and it found Graeber who beat Wiencek at 6:29.

“I think I was talking to Lou Nanne earlier today and he was asking us for the keys (to the game),” Klatt said. “Goaltending was one and we needed some additional scoring and boy did we get it tonight, it really paid off. Keaghan and Connor and [Jack Burnson] played excellent.”

Eden Prairie’s Jack Jensen nearly tied it twice in a 1:11 span on a pair of glorious opportunities midway through the second but was thwarted each time by Stejskal. He was rewarded, however just minutes later when a blocked shot off the stick of Mittelstadt found Jensen below the right circle and he buried it for a 2-2 game at the second intermission. 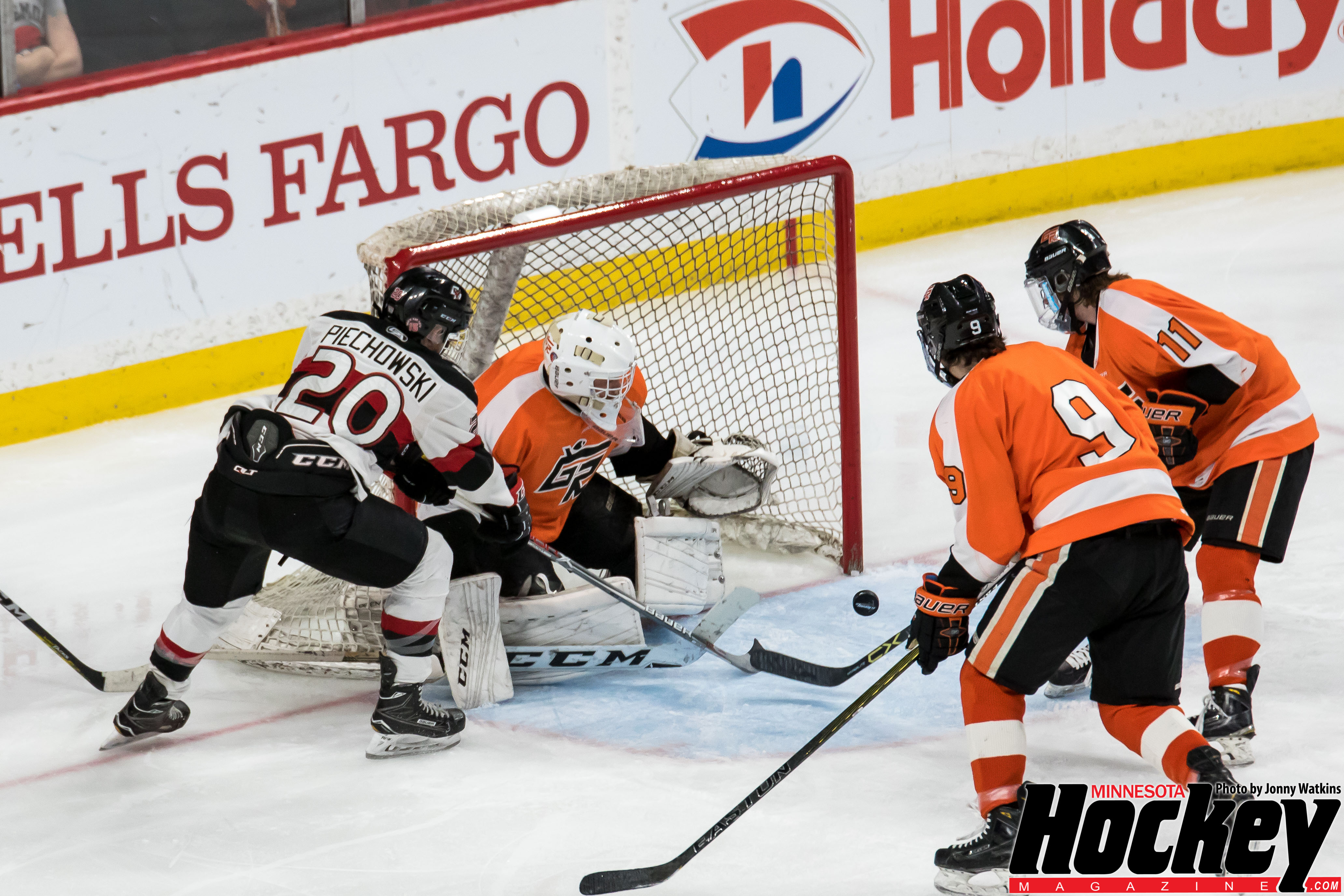 Grand Rapids goaltender Zach Stejskal with one of his 47 saves on the night. (MHM Photo / Jonny Watkins)

The Eagles staged a furious rally in the final period, firing 24 of their game total of 49 shots in the third period alone. But Grand Rapids goaltender Zach Stejskal was stellar in the Thunderhawks’ crease, frustrating Eden Prairie more and more as the game went on.

“Zach has had a wonderful season and been a backstop for us all year,” Klatt said. “I’m just happy he got this opportunity to show what he’s capable of doing and he really rose to the occasion tonight.”

The Grand Rapids win, combined with Moorhead beating Lakeville South earlier in the evening, sets up the first all-northern final since Roseau beat the Thunderhawks 5-1 in 2007. Klatt admitted the matchup has special meaning.

“Us northern hockey people stick together so it’ll be a fun day tomorrow. They’re a great hockey team and it’s gonna be another game just like tonight.”