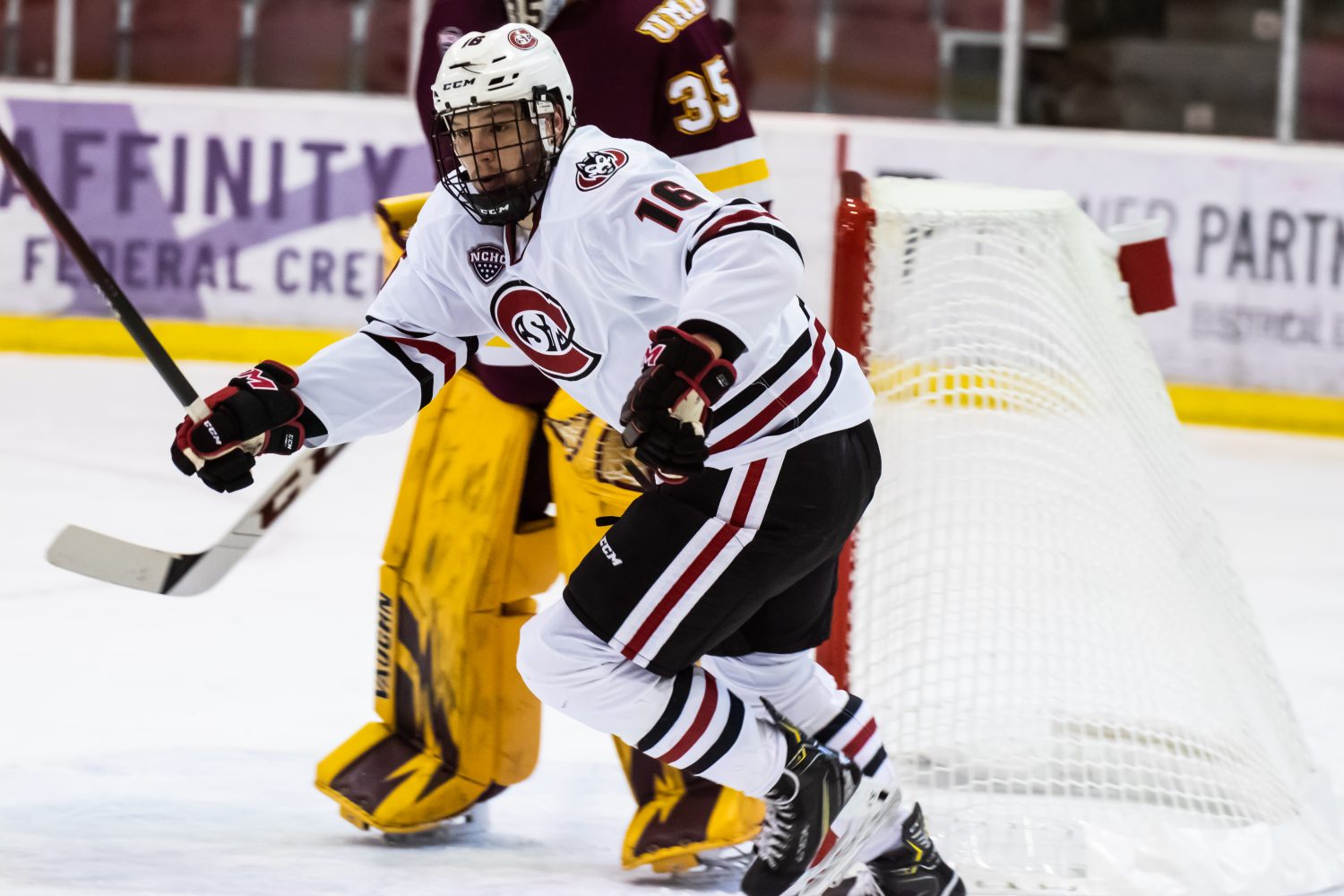 Coming from three years of junior hockey in the North American Hockey League into a high-caliber National Collegiate Hockey Conference was a challenging transition for Will Hammer, a senior forward with St. Cloud State University. He had to get up to speed with some of the elite players in the conference, plus find his overall role within the Huskies.

Once he got past his sophomore year and into his junior season, he had a better understanding of where his piece fit into the St. Cloud State puzzle.

“So that was good for me, confidence-wise of knowing that I can fill this fourth-line role,” Hammer said. “And I think it fits the player that I am.”

Hammer, a St. Cloud native, doesn’t have monster offensive numbers. He scored three goals and an assist in 32 games his junior season and has two goals and seven points this year.

But that second goal this year was a big one. It was the eventual game-winner in the NCAA Regional Final in a 4-1 victory over Boston College that helped send St. Cloud State to its second Frozen Four. The Huskies (19-10-0), coached by Brett Larson, face Minnesota State at 4 p.m. CT on Thursday.

The Huskies tied the game 1-1 midway through the second period against Boston College on March 28. About six minutes later, Hammer took an initial shot on goal from the front of the crease. As he and his teammates crashed the net looking for a rebound, Nick Perbix fired another shot on goal. Hammer bounced that rebound into the net for a 2-1 lead.

“It’s not every day that I’m contributing on the scoresheet,” Hammer said. “So it was fun to get that goal, on the team’s behalf. I was the beneficiary of the play.”

He credited his linemates who worked to get the puck and get bodies in front of Boston College goaltender Spencer Knight.

“I just happened to be the one to put it home,” Hammer said. “It was a fun moment. One I’ll never forget, for sure.”

He may have that unforgettable goal, but Hammer’s journey to the Frozen Four with St. Cloud State was filled with plenty of ups and downs. 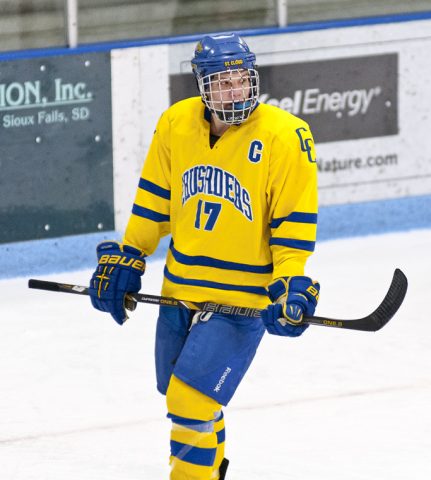 Will Hammer as a St. Cloud Cathedral Crusader.
Photo by Tim Kolehmainen

Hammer jumpstarted his post-high school hockey career with four years on the St. Cloud Cathedral boys’ team where he scored a total of 65 goals and 145 points. He was the squad’s leading scorer his senior year in 2013-14 with 23 goals and 48 points in 26 regular-season games.

That season ended with a trip to the Minnesota boys’ state hockey tournament. Cathedral beat Totino-Grace 4-3 in overtime in the Class 1A quarterfinals before losing to eventual champ East Grand Forks. The Crusaders, coached at the time by Eric Johnson, took fourth place in the tournament.

From there, Hammer played two seasons with Aberdeen in the NAHL where he had an “OK” first season and “not the greatest” second season, he said. He scored nine goals and 33 points across 109 games in his two seasons. A new coaching staff came into Aberdeen after his second year, and Hammer was traded to the Minnesota Magicians in Richfield.

“Which was kind of challenging in itself for anyone who’s been traded, it’s not an easy thing to go through,” Hammer said. “You kind of get a little perspective of what the professionals go through on a very small scale.”

Hockey went well for him with the Magicians, where he scored 18 goals and 41 points in 60 games, and he talked with a few colleges along the way. But nothing worked out. Then he was all set to go to Augsburg College, a Division III program, after his time with the Magicians. Luckily, a spot opened up on the St. Cloud State roster instead.

Another thing he’ll never forget? The call asking if he’d like to be part of the St. Cloud State men’s hockey team. He was outside at home.

“I know exactly where I was,” Hammer said. “It was fun being able to tell my family and friends, too, because I felt like they were in the trenches with me.

“It was exciting, not only for me, but for my whole family. Something that we’ve enjoyed and will never forget.”

Though his hockey journey turned out good in the end – and maybe even better with a national championship – Hammer acknowledges it was tough, too. Playing in juniors for three seasons and then moving on to collegiate hockey, it was always a challenge when he’d compare himself to other players, especially with the access of social media seeing where others are in their careers, he said.

“That was a lesson I learned throughout my junior experience is that everybody has their own path,” Hammer said. “Here I am today and playing in the Frozen Four.

“I never would’ve imagined I would be in the Frozen Four here in my senior year in my hometown.” 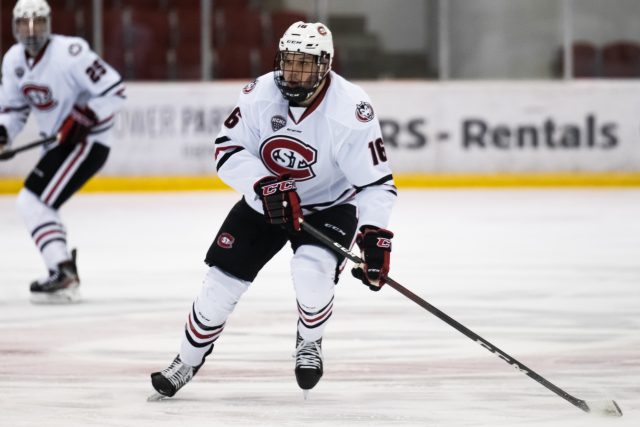 Every player has tough moments in their hockey careers, Hammer said, adding that the trade from Aberdeen was a tough one for him. He also had a health scare during his sophomore year at St. Cloud State, giving him another hurdle to clear before he was good to go and continue playing. He’s thankful to have such a great support system around him, too, with family and friends.

The Huskies are two victories away from a national championship. First up, they need to beat a tough Minnesota State team in Thursday’s Frozen Four semifinal. Hammer knows that every team at this stage of the tournament is good, and the Mavericks are no different with great coaching, a solid forecheck and detailed, structured team.

St. Cloud State will need to focus on themselves, as they have throughout the rest of the playoffs, Hammer said. It will be key to work on the opposing D and own the front of not only the Huskies net but the Mavericks net as well, according to Hammer.

“I think if we do that, then we like our chances,” Hammer said. “So that’s what we’re going to focus on. We’re just going to focus on that first game and trying to play Husky hockey for 60 minutes.”

For Hammer, his ultimate dream was to play college hockey and win a national championship. Still striving to achieve the last part of that dream this week, he also said it will be the end of the road for him, hockey-wise. Outside of the rink, he has an internship with CentraCare, a local hospital in St. Cloud, and hopes to pave a career in health administration.

Even though his hockey path might be coming to an end with this Frozen Four, he’ll be able to look back and recall the adversity he made it through and the confidence he gained.

“I think, with anything, confidence is over half the battle,” Hammer said. “So I was able to get a little more confidence in my time here at SCSU.”