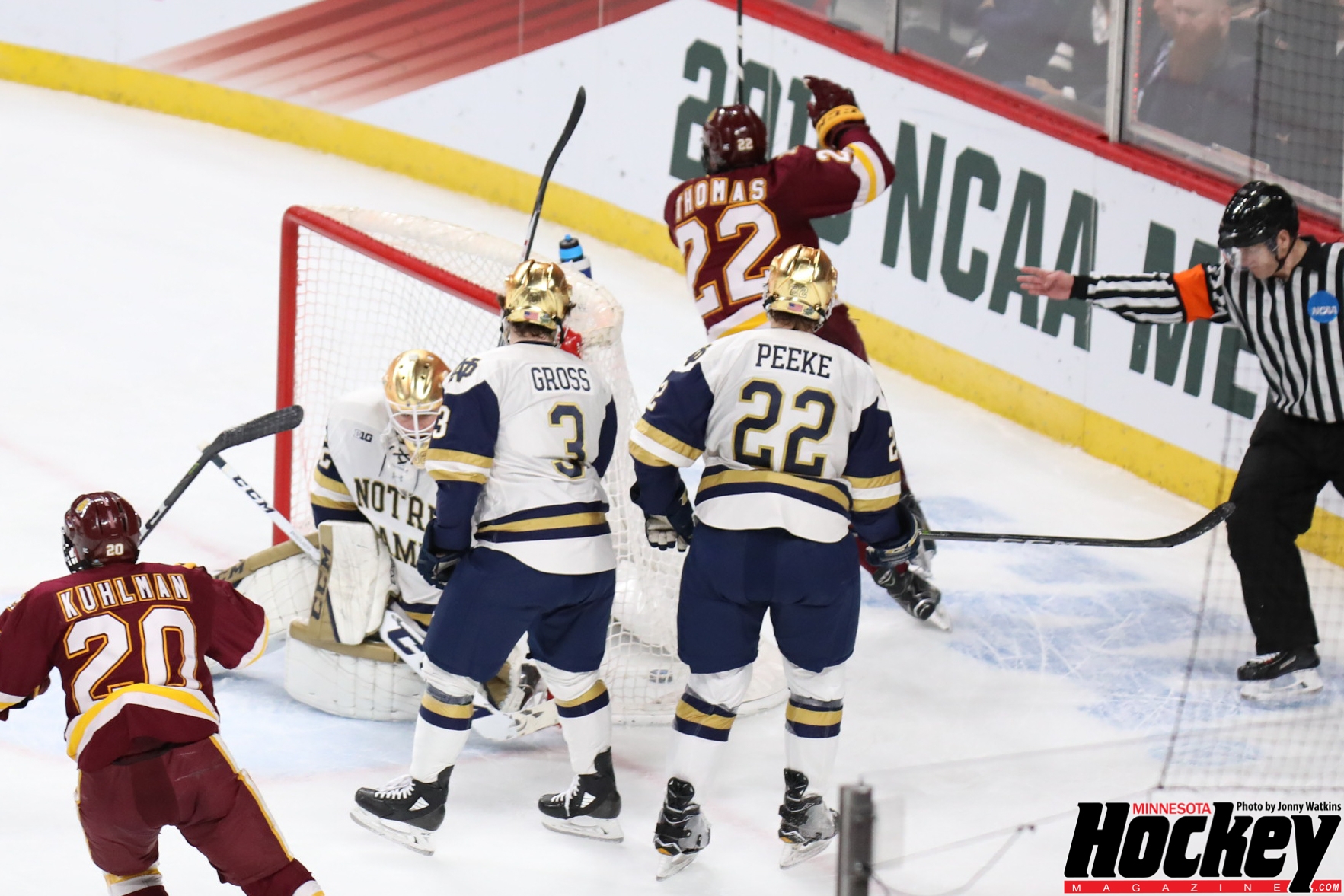 Minnesota Duluth’s Jared Thomas (Hermantown) and Karson Kuhlman (Esko) celebrate Thomas’ 11th goal of the season at the 18:39 mark of the first period to give the Bulldogs a 2-0 lead over Notre Dame in UMD’s 2-1 Frozen Four championship game win over the Irish on Saturday night at Xcel Energy Center. (MHM Photo / Jonny Watkins)

St. Paul — Maybe the UMD hockey team should try to schedule its “senior night” to coincide with the NCAA championship game every year.

Karson Kuhlman and Jared Thomas — senior linemates who spent most of their four years not scoring — came up with the biggest goals of their careers Saturday night to ignite the Bulldogs to a 2-1 victory over Notre Dame before 18,303 fans at Xcel Energy Center in Saint Paul.

The eight freshmen in the Bulldog lineup deserved the raves from all who watched, and sophomore goaltender Hunter Shepard weathered some intense pressure to hold that early lead, but captain Kuhlman, from Cloquet-Esko-Carlton, and Thomas, from Hermantown, came through with first-period goals to stake the Bulldogs to a 2-0 lead.

Then UMD could safely, but dangerously, turn things over to goaltender Shepard and a textbook display of team defense led by their poised and patient blueliners, to win their second NCAA championship in men’s hockey.

Kuhlman and Thomas continued their late offensive leadership, which shows some great patience by coach Scott Sandelin. Kuhlman, always hustling, has proven his captaincy repeatedly. His goal Saturday night was his 13th  of the season — far from sufficient reward for all the energy he’s spent.

“If I could have 25 guys like Karson, my job would be a lot easier,” said Sandelin, who tried double-shifting Kuhlman in the first period after freshman winger Kobe Roth injured his ankle when he was checked into the boards. On the first shift Kuhlman played on the fourth line, he scored.

Thomas, a big scorer in high school and in junior, spent his four years looking good, and doing everything right, but without scoring much. His goal — the game-winner — was his 11th of the season, and only his 21st in 163 games over four years. But Sandelin stuck with him patiently, for his speed, his two-way play, and maybe believing he might someday come through offensively.

It worked, even if just barely, because Thomas’s 11th tally was the game-winner and gave UMD its second NCAA men’s hockey title at the same location it won it’s first one, in 2011. That time, the Bulldogs beat Michigan 3-2 in the second overtime, after beating Notre Dame 3-2 in the semifnals.

For their play in the Frozen Four, Kuhlman and Thomas were both named to the all-tournament team, along with Shepard and freshman defenseman Scott Perunovich, and Notre Dame winger Andrew Oglevie and defenseman Jordan Gross. For good measure, Kuhlman also was named tournament most outstanding player.

UMD violated a whole raft of traditions to finish 25-16-3 — the most losses by an NCAA champion. After losing twice in the NCHC Frozen Faceoff at Xcel Center, UMD made the NCAA field as the final at-large entry by one-10,000th of a Pairwise point over Minnesota. From that point on, the Bulldogs became the first team since 1977 to win all four of its NCAA tournament games by one goal.

Taking down top-seeded Notre Dame, which finished 28-10-2 and still in search of its first NCAA title, means UMD won the title as the lone NCHC team in the field, against three Big Ten teams — for the third straight NCHC championship.

The other traditional difficulty the Bulldogs ignored was the high-risk of trying to hold onto a narrow lead against an explosive opponent. But the Bulldogs shrugged all of that off and continued to follow a remarkable pattern of their own, jumping ahead 2-0 with a forceful first period, then battling to hang on as the game progressed.

The Bulldogs did that in Sioux Falls when they got a 2-0 lead on Air Force and won 2-1 for the West Region title, and they did it again Thursday when they struck twice in the first 3:04 and rode those goals to another 2-1 victory to eliminate Ohio State in the semifinals.

So why should Saturday night’s final be any different?

The Bulldogs opened the tough, physical battle against Notre Dame by losing Roth, who a couple of hours later was helped onto the ice in a protective boot to join the raucous celebration. That’s when the senior tandem of Kuhlman and Thomas staked them to the 2-0 lead.

On his first turn at wing with center Jade Miller in Roth’s spot on the fourth line, Kuhlman helped spring the puck free in the neutral zone, then he slipped ahead to the far blue line as Miller rounded up the puck and passed it ahead to Kuhlman, who was wide open to rush the net. Kuhlman started to crank up for a slap shot, and appeared to change his mind, striding in a couple more steps and snapping a wrist shot past Notre Dame goaltender Cale Morris on the short side at 9:06. 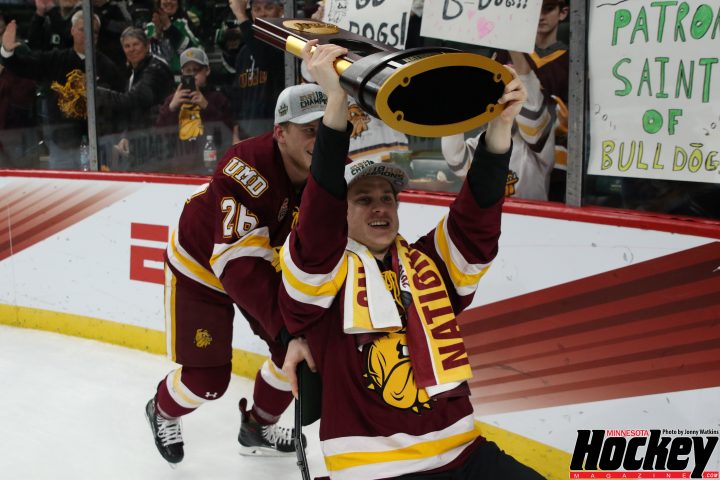 Both Thomas and Kuhman have provided leadership roles with heady play and a lot of grit in tight quarters, and late in the first period, they demonstrated, collaborating on a forecheck in the right corner of the Irish zone. Kuhlman finally nudged the puck around the corner boards to Thomas, who won another battle for possession there and headed for the goal.

With no angle to shoot at and no teammate to feed, Thomas rammed a shot at Morris, who was already kneeling in the crease, figuring he had every angle covered. Turns out, he didn’t. Thomas’s shot hit his skate and glanced into the net, and the Bulldogs were up 2-0 at 18:39 of the opening session.

“Kars got the puck up to me, and I threw a surprise shot at his feet,” said Thomas. “I was fortunate enough to find a little hole there.”

It could have been 3-0, but Mike O’Leary eliminated a set-up in the slot with a timely hook that saved a goal, maybe, but didn’t elude the officials. UMD’s power play, however, seemed to get more deliberate as time passed, interrupting their momentum on that overlapping power play, and another one 2 mintues into the second period.

It was no surprise that Notre Dame got some fire from the penalty kills, and that the penalties started to even up. The Bulldogs did a good job killing a Louie Roehl penalty at 4:35, but when Perunovich stopped a rush and was called for interference when the Notre Dame skater hurtled over him, the Filghting Irish broke through Shepard’s goaltending.

Dan Morrison was on the right boards and passed across the slot to Jake Evans in the left circle. Sophomore Andrew Oglevie broke hard to the net, and arrived just as the pass from Evans got to the crease, and Oglevie jabbed the puck under Shepard at 7:40.

The Bulldogs obviously had no intention of sitting back to protect the lead, outshooting Notre Dame 18-9 in the second period. Still, the Irish had some excellent chances at the equalizer, the best of which was when Colin Theisen sped around the defense and crashed the net.

Shepard, who had made two or three exceptional saves at the left post moments earlier, held his ground and made the save to preserve the 2-1 lead to the second intermission.

“I thought we played much better in the second period,” said Notre Dame coach Jeff Jackson, whose team dominated its first season in the Big Ten by winning its first 13 games, and made it a habit to win close games at the finish. “We needed to tie the game in the second, because once you get to the third period, they’re a shut-down team.”

In the third period, the shut down effort was mainly by UMD’s kiddie corps — the steady and heady defense led by sophomore Nick Wolff and the five freshmen who never seem to sense any danger. They stopped rushes, played the puck smartly, and cleared everything, while leaving a few threats for Shepard to handle.

After outshooting Notre Dame 18-8 in the second period, UMD held the Irish to only 5 shots with a 7-5 edge in the shut-down third, for a 35-20 game advantage. “Obviously, we didn’t want to get on our heels,” said Kuhlman. 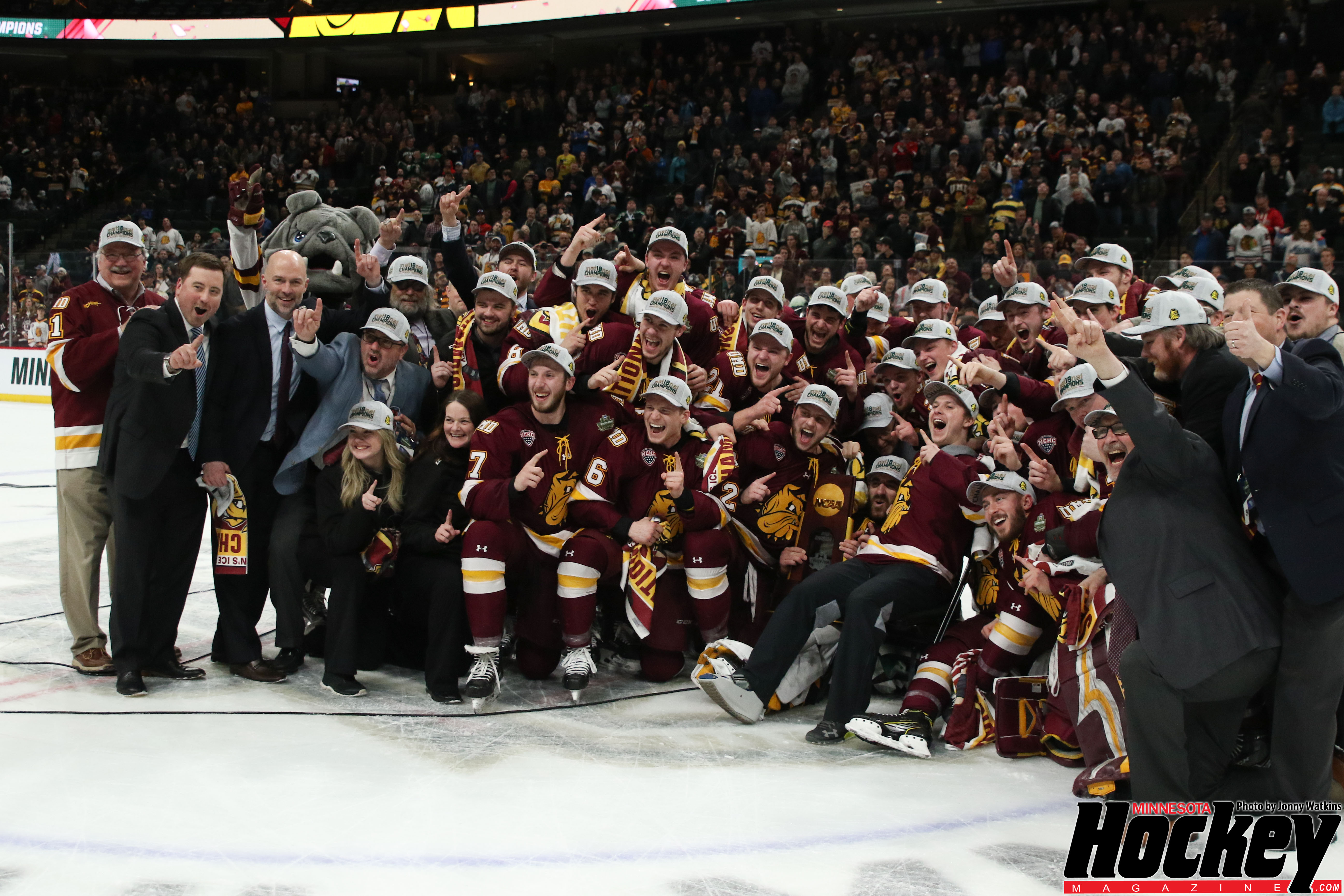