Too Soon to Panic 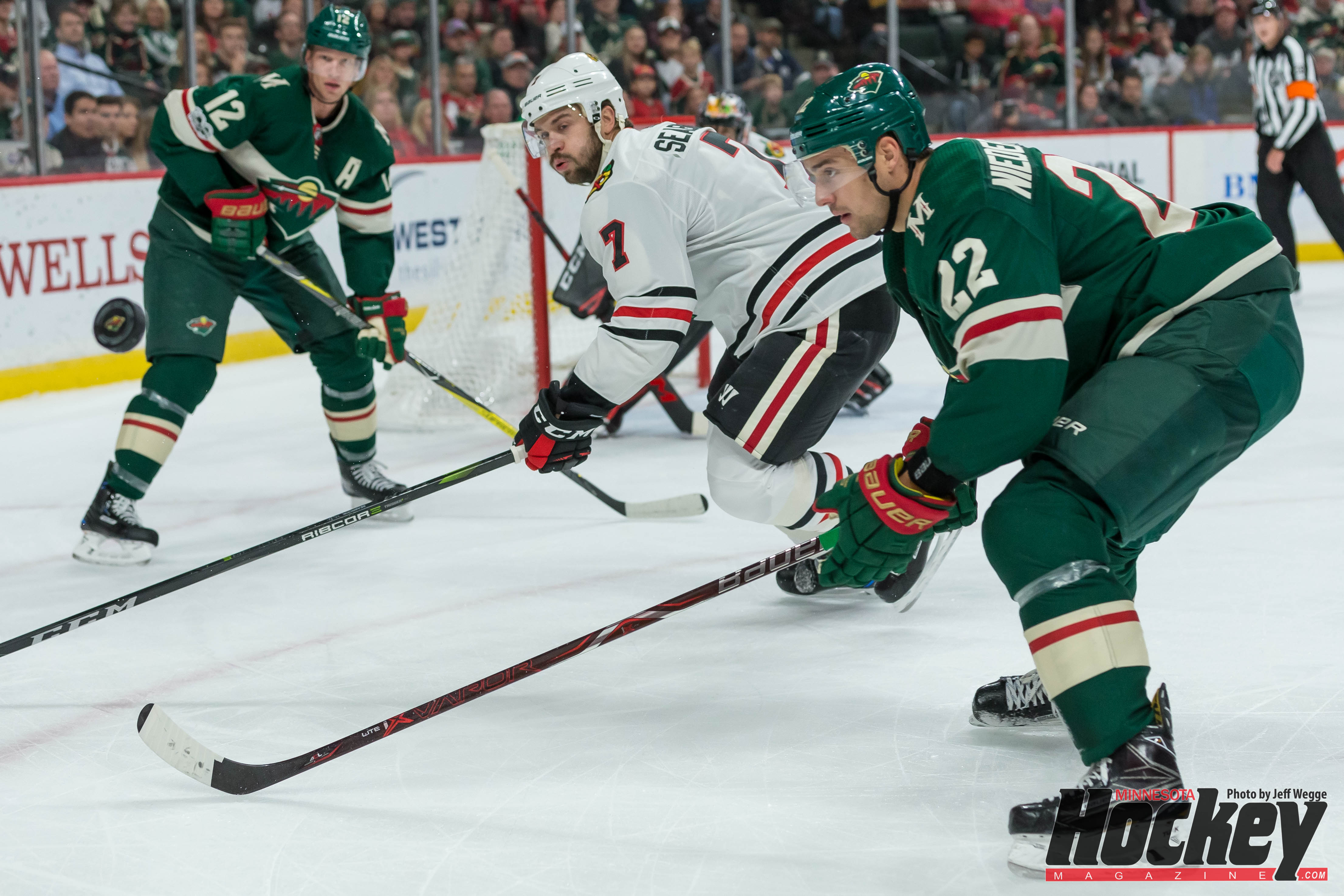 St. Paul – As the Wild see-saw through the early season, they often are good and just as often are bad.

The optimist in me says, however, that they are showing signs of becoming a solid team.

Errors and turnovers have been a problem, part of an inconsistent stretch that was called out by both Devan Dubnyk and Eric Staal following Minnesota’s 2-0 home loss to the Chicago Blackhawks on Saturday, Nov. 4.

“There’s no way in this league to win in spurts,” Dubnyk said. “It’s got to be every single game.”

Noted Staal: “The rhythm and what makes us successful, I don’t think we’ve been doing it consistently.”

Still, there are positive signs. You’ve got to like the way the Wild’s forecheck seems to be rounding into shape even without injured Zach Parise and Charlie Coyle.

And relative newcomer Mikey Reilly looks so far like a real find on the blue line: unflappable on defense and eager to jump into the offense. His play next to that of Jared Spurgeon and Ryan Suter offsets some of the deficits seen from the team’s other defenders.

Another favorable impression is the way Jason Zucker’s fast-break style often ignites great zone presence for the Wild offense. As well, rookie forward Luke Kunin exhibits some equally solid play not only on offense but by helping out in his own zone.

In addition — and maybe even more surprising — with Parise and Coyle sidelined, 30-year-old Chris Stewart has stepped up his offensive game.

Dubnyk might be the one guy who needs to stand out regularly. The good news: He has apparently shaken off what looked to be a little early shakiness in goal this season. He stopped 33 of 34 shots against Chicago, allowing just one goal on an extended Blackhawks’ power play. He and Alex Stalock appear to give Minnesota a formidable duo on net.

Add in an early showing of the same kind of stellar play supplied a year ago by Mikael Granlund, Mikko Koivu and Staal and you have reason to look forward to Minnesota’s next 70 games.

Coach Bruce Boudreau, seeing a glass more than half full, noted after the loss to Chicago that the Wild “could have won 11 out of those 12” early games on the schedule. The Wild were tied or ahead in the third period of all those games, he pointed out.

No one really believes Minnesota deserved to win even eight of its first 12, but Boudreau believes the 5-5-2 record is a little misleading. Occasional lapses have proved decisive, he said.

In addition, Wild shots have caromed off iron or landed behind opposition goaltenders and then been swept out of danger too often. Corey Crawford seemed to have a four-leaf clover in his gear as he picked up a shutout for the Blackhawks on Saturday despite the Wild jamming the net.

The effort was there, but the Wild were simply unable to nudge the puck across the line.

“We had our chances,” winger Nino Niederreiter said. “Good teams, they capitalize, and we didn’t.”

The eventual return of Parise and Coyle should help Minnesota’s cause in that department. The law of averages might be in the Wild’s favor, too. One thing is certain: Through a dozen games, there is no reason yet for Wild fans to panic.