The NHL trade deadline is right around the corner. 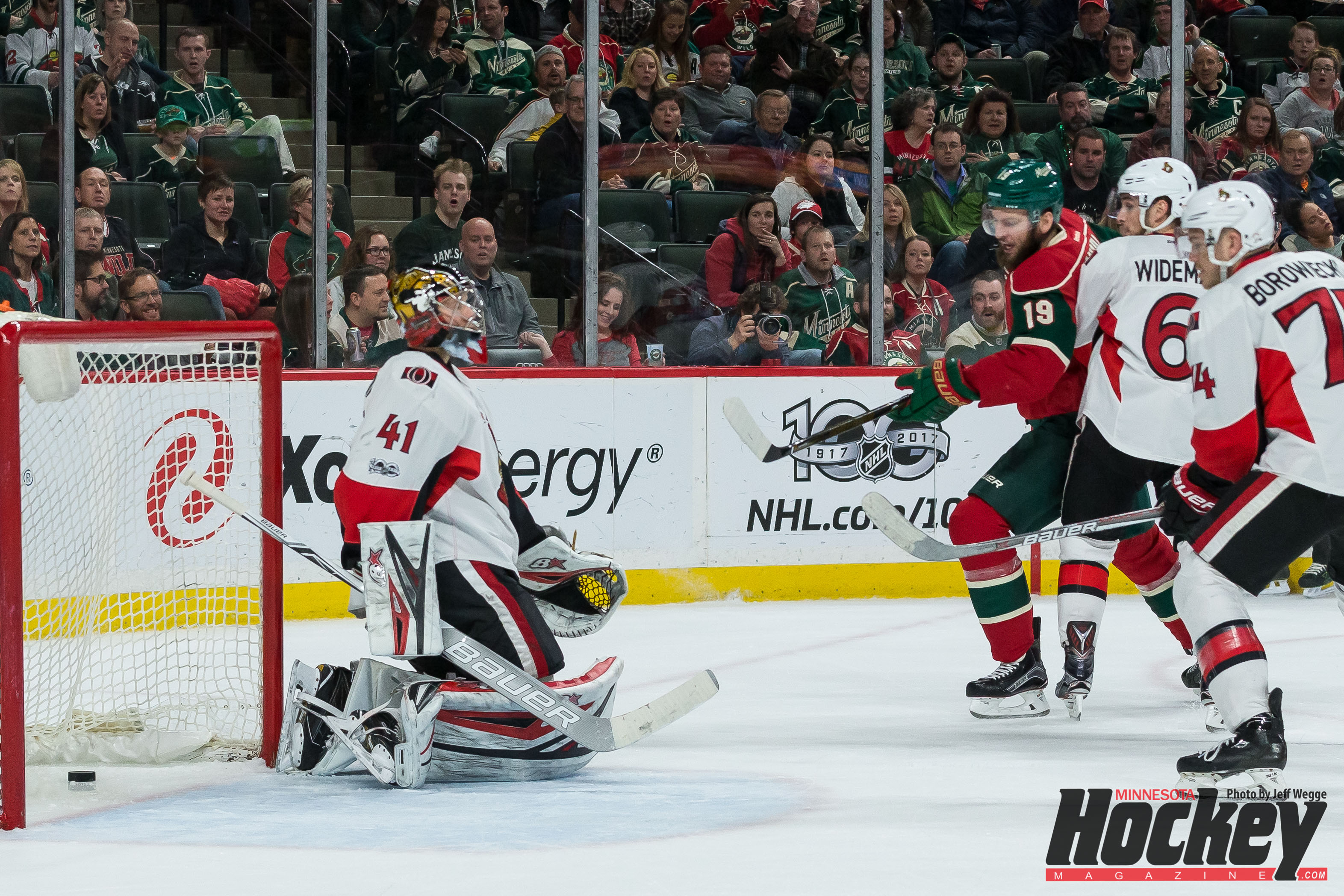 Center Martin Hanzal scored five goals among 14 points in 25 combined regular and postseason games after Minnesota surrendered a 2017 first-round pick in a trade package for him on Feb. 26, 2017. (MHM Photo / Jeff Wegge)

With NHL trade deadline looming, should Wild buy or sell? 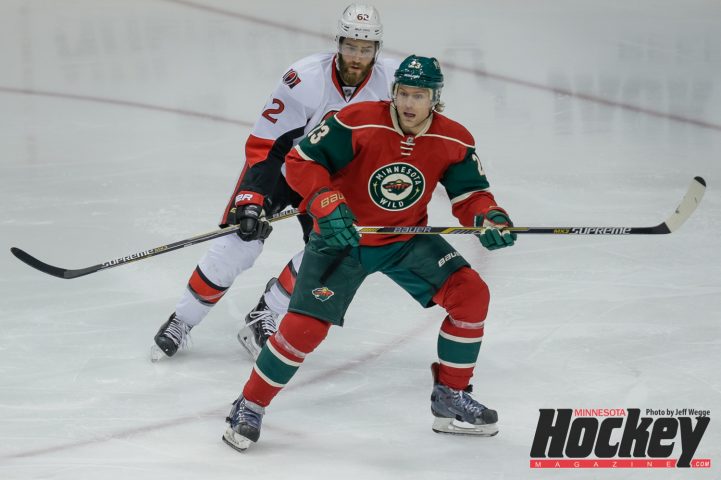 Left wing Sean Bergenheim’s one goal in a Wild sweater was his lone point in 20 combined regular and postseason games after Minnesota acquired him and a seventh-round pick from the Florida Panthers on Feb. 24, 2015 in exchange for a third-round pick the Panthers used to select Gopher forward Rem Pitlick. (MHM Photo / Jeff Wegge)

Minnesota’s regime of Chuck Fletcher and Brent Flahr have never shied away from adding at the deadline. Last year, the team mortgaged two of their top 2017 draft picks to land Martin Hanzal. While in past years they’ve acquired such players like Matt Moulson, Sean Bergenheim, Ilya Bryzgalov and Jason Pominville. Probably the team’s best move – which wasn’t necessarily at the deadline – was when they acquired Devan Dubnyk from Arizona for a third-round pick and Dubnyk turned out to be a franchise goaltender, with two All-Star appearances since.

With just 26 games remaining in the regular season as of Feb.14 and the Wild in a dog fight for a playoff spot, Minnesota is in peculiar spot. On one hand, the team is in the midst of playing their best hockey of the season. Since the new year, Minnesota has just three regulation losses – 10-3-3 – while posting the best record on home ice – 20-4-2 – in the NHL.

Yet, the team has been so hot-and-cold this season, it’s tough to buy in to their recent sample size of success. They blew a 3-0 lead to the worst team in the league, the Arizona Coyotes, in a Feb. 8 loss and nearly suffered the same fate to the New York Rangers on Feb 13. Although they’ve been phenomenal on home ice, recent road performances against Dallas, Pittsburgh and Colorado in the same stretch leaves you wondering if this current group can make a deep run in the postseason.

Here are three options for the Wild to consider by the time the NHL trade deadline hits on Feb. 28.

If I was running the Wild, I would not make any significant moves this month. After suffering a barrage of injuries at the beginning of the season to core players, Minnesota is finally healthy outside of defenseman Jonas Brodin who will be out until March. The team is playing its best hockey of the season and with all the draft picks Minnesota has forfeited over the years, there’s not exactly a lot of future assets for Minnesota to package in a trade.

Dubnyk is playing well, the power play is turning around and players like Zach Parise and Charlie Coyle have had an uptick in their play, which the team desperately needs. Combine that with a generally weak market, it really doesn’t make much sense for the Wild to make add anything at the deadline. 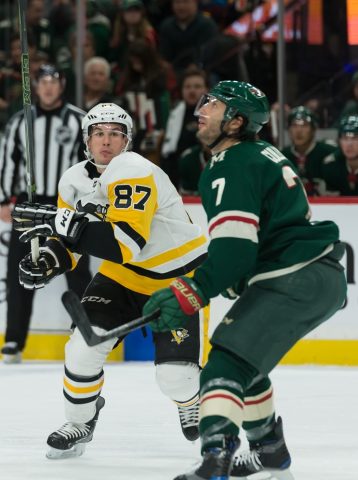 Rumors are swirling ahead of this month’s trade deadline about a potential return to Pittsburgh for Wild center Matt Cullen. (MHM Photo / Jonny Watkins

It wouldn’t shock me, however, to see the Wild sell a regular in the lineup for more draft picks and salary cap relief heading into the offseason. With Jason Zucker and Matt Dumba approaching big pay days this summer, Minnesota will need all the cap space they can get. Trading a player like Tyler Ennis could be beneficial for the Wild. Ennis, who was the key piece in a trade with Buffalo last summer that sent Marco Scandella and Pominville to the Sabres, has been disappointment statistically in his first season with the Wild.

Ennis has just 15 points (seven goals and eight assists) in 54 games this season while averaging just under 12 minutes a game. He has a cap hit of $4.6 million this season and is on the books next season for the same amount of dough. If Minnesota is able to obtain a mid-to-low-round pick for Ennis, that would be a win for the franchise in the longterm. The Wild just can not afford to pay a forward nearly $5 million a season to be a 20-point producer in the regular season. Plus, Ennis’ contract could be attractive to a team that’s trying to get the salary cap floor.

Other veterans like Matt Cullen and Chris Stewart have also been scratched on more than one occasion over the last few month. Both players will be free agents this summer and there’s even been some speculation that Cullen could return to the Penguins, according to to the Pittsburgh Post Gazette.

3. Get ready for the kids

If the Wild were to move on from Ennis and/or Cullen that would obviously create a void in the lineup which would be an ideal time for young top-tier prospects to get some legitimate playing time such as former first-round picks Joel Eriksson Ek and Luke Kunin. There’s no doubt the organization thinks highly of them and obviously the hope is that one day they will be contributors in the lineup. In addition, Wild prospect Jordan Greenway of Boston University,  currently with Team USA in the Pyeongchang Winter Games, could very well sign with the Wild when the college hockey season ends.

Sure the idea of Dion Phaneuf, Rick Nash or a even a Marian Gaborik reunion sounds like a fun idea, it just doesn’t seem like it’s in the cards for the Wild this season.

If they’re going to make a run at the Stanley Cup, it will likely be with the same core group of players that’s help the State of Hockey’s NHL team reach the postseason in five consecutive seasons.