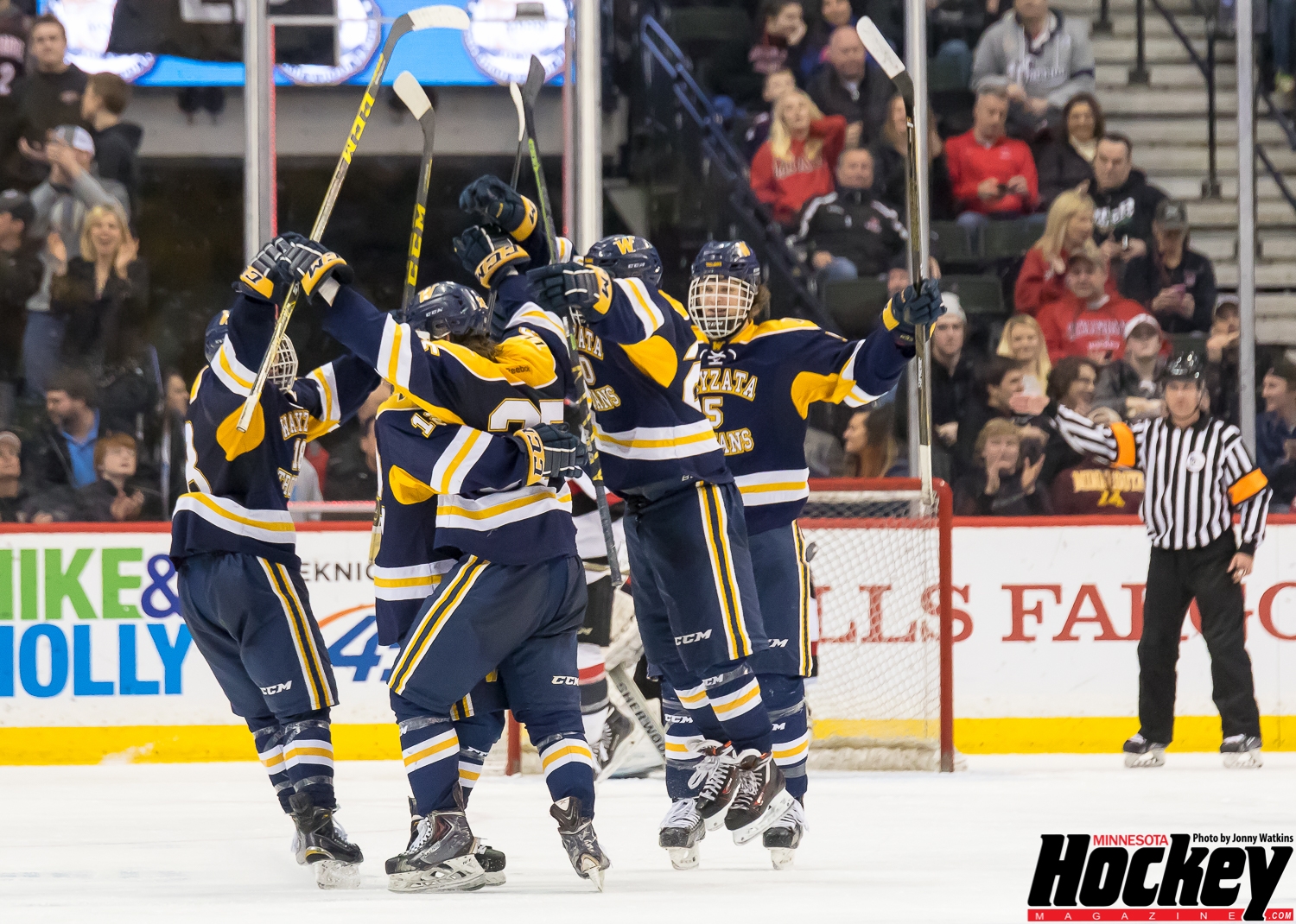 Wayzata defenseman Logan Lindstrand is mobbed by teammates after his goal put the Trojans ahead for good in their 5-3 Class 2A Boys’ State Hockey Tournament final win over Eden Prairie on Saturday night at Xcel Energy Center. (MHM Photo / Jonny Watkins)

A pair of late second-period goals, one of them shorthanded, sparked a comeback from a two-goal deficit as Wayzata went on to capture its first-ever boys’ hockey state championship with a 5-3 win over Eden Prairie on Saturday night at Xcel Energy Center.

The Trojans and Eagles treated the crowd of 19,655 to a thrilling season finale filled with highlight reel goals, big hits, great saves and a puck caroming of an official’s head.

Wayzata defenseman Logan Lindstrand’s seeing-eye wrist shot from the left point through traffic found its way behind Eden Prairie goaltender Shaun Durocher at 5:32 of the third and that stood up as the game winner. The Trojans put the clamps down on the Eagles from there, keeping them at bay until Colin Schmidt’s empty netter at 16:58.

“I was just trying to get the puck on net,” Lindstrand said. “I saw one of their guys coming up quick and I tried to get it off quick and just lucky that it went in.”

Wayzata goaltender came up big for his team, especially in the first period when he made 14 of his 30 overall saves in the game. Schilling’s performance didn’t go unnoticed by his opponents.

Mittelstadt, who led the tournament in scoring with 14 points, and Minnesota Mr. Hockey candidate Michael Graham each scored for the Eagles, but Wazyata’s stingy defense kept the potent tandem mostly in check.

“They’re tough to score on, we knew that,” Eden Prairie coach Lee Smith said. “I would’ve thought scoring three we would’ve had a chance to win. Honestly, I would never have expected them to get four on us.”

Trailing 3-1 nearly 12 minutes into the second period, things looked to go from bad to worse for Wayzata when its second power play of the period was wiped out after a major boarding penalty was assessed to defenseman Hank Sorensen.

O’Leary called his timeout at that point and gathered his team together and later said his message to them was simply kill the penalty and get back to playing their game.

“We believed that if we play our game, are controlling the puck and taking time and space away from Mittelstadt and Graham that we can win and that’s what we did,” O’Leary said.

Shortly after Eden Prairie’s Connor Olson came out of the box to put Wayzata down a man, Trojans forward Billy Duma’s pass sprung linemate Luke Paterson on a partial break. As the Eagles defender went all-in on Paterson, he slipped a pass back to a hustling Duma as he flew through the Eden Prairie zone and senior beat Durocher to cut the deficit to one at 13:34.

“It really comes back to being up 3-1 and having a major and wasting it,” Smith said. “I think that was the turning point.”

Just 2:16 later, Wayzata junior defenseman Collin Kubinski faked a shot from the blue line before sliding a pass to forward Matt Nelson between the circles and he rifled a shot to make it 3-3 at the second intermission.

“We’re happy with the way we bounced back and how we played the last seven minutes of the second and, obviously, in the third period as well,” O’Leary said.

Sorensen was asked for his thoughts on watching his teammates tie the game from his seat in the penalty box.

“Great show,” Sorensen said, drawing laughter. “It’s like I paid for a ticket and watched it myself.”

Eden Prairie and Wayzata split a pair of 4-2 regular season contests with each team winning on the other’s home ice and, like Saturday, both were capped off with empty-net goals. They were also intense, physical battles so it was only fitting that the rubber match be decided on neutral ice, with the Class 2A state championship on the line, of course.

After the teams traded goals in the first period, the Eagles appeared to assume control of the game on a pair of second-period goals just 3:35 apart by Michael Graham and Jarod Blackowiak. The second of the two came 12 seconds after Wayzata’s Jack Carlson was call for roughing to negate what had been a Trojans power play.

But the night ultimately belonged to the Trojans who return from St. Paul as state champions for the first time.

“That’s a huge accomplishment for the school and the city and our team,” Schilling said. “It’s unbelievable to say you’re a state champ.”