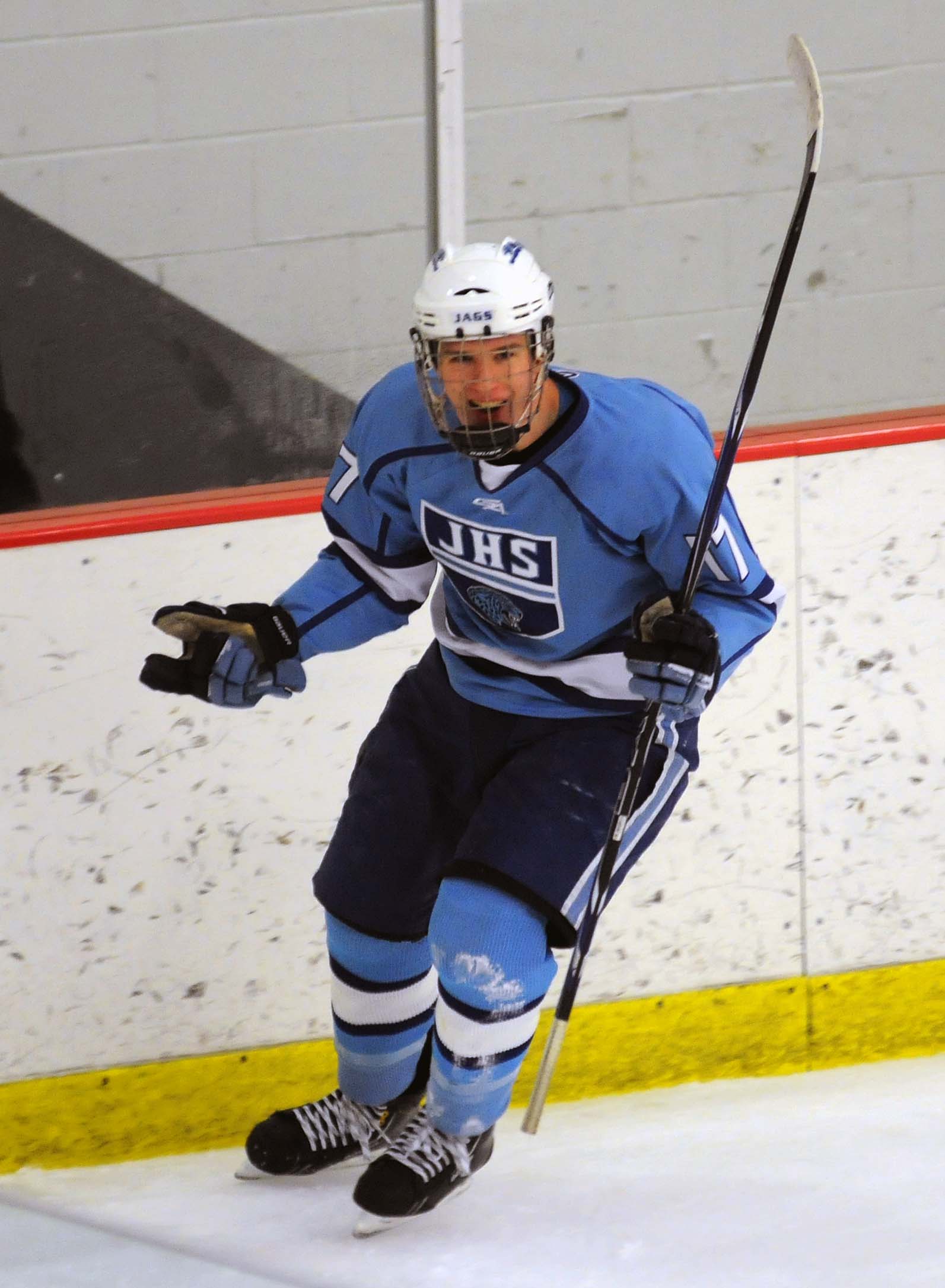 The 2013 Sports Authority St. Louis Park Holiday Classic concluded Saturday night as the Wayzata Trojans captured the championship with a 4-0 win over the Blaine Bengals Saturday night.  A pair of teams that did not lose in regulation also earned trophies as the Lakeville North Panthers won the third place game over the Bloomington Jefferson Jaguars by a score of 5-1 and the Benilde-St. Margaret’s Red Knights turned aside the Eden Prairie Eagles 5-2 in the Consolation final.  Both the Panthers and Red Knights fell in shootouts but ended up officially finishing the weekend 2-0-1 as shootout losses are not recognized by the MSHSL as an official result.

Wayzata 4 Blaine 0
The Wayzata Trojans continued their torrid play as they dashed through the St. Louis Park Holiday Classic field with three straight wins. A well rounded effort that featured goals from four different Trojans and 26 saves by Jen Vaughn Ahrens propelled Wayzata to the shutout victory. Jack Sorenson, Mathtew Freytag, Alex Stevens, and Max Zimmer dented the twine for Wayzata in the win. It was a well played game by both teams and contested to the final minutes as the Trojans carried slim leads of 1-0 after the first period and 2-0 after the second period.

Wayzata (9-3-0, 0-0-0) opened the tournament with a hard fought 2-0 win over the Moorhead Spuds and defeated Bloomington Jefferson by a score of 6-1 to earn the shot at the title game with the Bengals(8-2–1, 6-0-0). The Trojans are winners of five straight and six of seven games.

Lakeville North 5   Bloomington Jefferson 1
The Lakeville North Panthers erupted for three third period goals to pull away from the Bloomington Jefferson Jaguars and deliver a 5-1 win in the third place game of the Sports Authority St. Louis Park Holiday Classic. Tristan Hazlett led his team with a goal and two assists and Ryan Poehling and Max Johnson each had a goal and an assist to spark the Panther victory.

It was an impressive weekend for the Panthers (8-3-1, 7-1-0) who opened with a dominating 7-0 victory over the Eden Prairie Eagles in the quarterfinal round of the tournament. They wound up closing out regulation and overtime in the semifinal with a tie against the Blaine Bengals who ultimately won in a shootout. The game went in the books as a 3-3 tie. The Jaguars left the tournament with a 6-4-1 record.

Benilde St. Margaret’s 5  Eden Prairie 3
The Consolation final was a game that not only was for thrid place, but also positioned the Benilde-St. Margaret’s Red Knights and Eden Prairie Eagles in a key Section 6AA contest. The two teams are slated to meet in the regular season two more times and a win in the tournament not only captured third place, but also put one team in better position from a section seeding perspective. The Red Knights prevailed in a 5-2 win over the Eagles as the Red Knights peppered the Eden Prairie goal with 37 shots on goal while only allowing 18 against.

Going 2-6 on the power play, the Red Knights also won the special teams battle as they held the struggling Eagle power play to an 0-5 effort. Nick Austin, Spencer Naas, Johnny Austin, Chase Jungels, and Carter Roo all scored in the Red Knight effort as Jalen Long made 16 saves to earn the win in goal as his team improved to 9-2-2 at the midway point of the season. The Eagles are now 8-3-0 on the season including 1-3 in their last four. Eden Prairie opened the season with a 7-0 loss at the hands of Lakeville North and then defeated the Maple Grove Crimson by a score of 3-2.

Maple Grove 4  Moorhead 3
The Maple Grove Crimson welcomed back three players that were ejected for majors in their quarterfinal round game of the Sports Authority St. Louis Park Holiday Classic and salaved a win in the seventh place game. Losses to the Blaine Bengals by a score of 9-3 and then the Eden Prairie Eagles was follwed by a 4-3 win over the Moorhead Spuds in overtime. Sam Huff tied the game at three with 4:05 left in the third period to force overtime. That set up a Josh Passolt  goal :37 into the extra session that earned the much needed win for the Crimson. Passolt had goal and an assist and Matt Vogl had 3 assists in the win for the Crimson who improved to (6-5-1, 4-2-0) on the season.  Aaron Herdt led the Sppuds with 2 goals and an assist as their recored fell to 5-7-0.