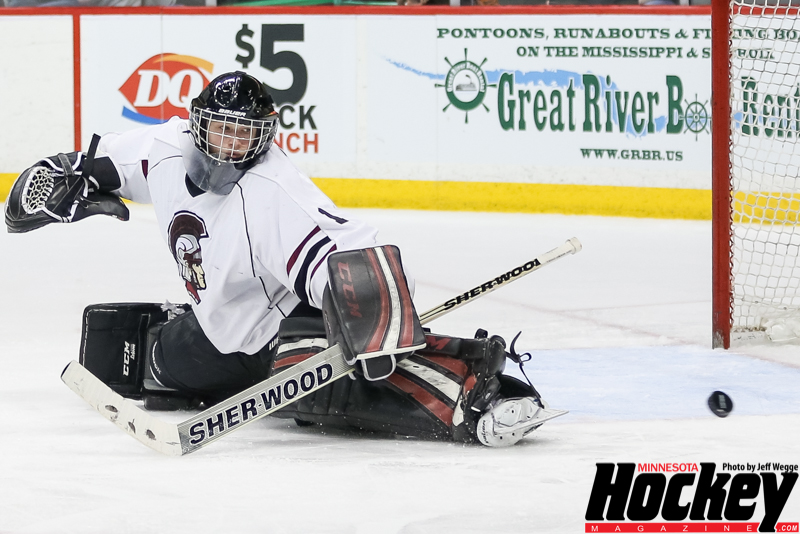 New Prague goalie Connor Wagner makes one of his seven saves against Chisago Lakes in the Trojans 5-2 Class A quarterfinal win over the Wildcats. (MHM Photo / Jeff Wegge)

SAINT PAUL—It’s hard to win any game when your team is only allowed nine shots on goal, let alone a game in the state tournament. That was the case for Chisago Lakes in their 5-2 Class A quarterfinal loss to New Prague as it was outshot 24-9.

“I think we attempted more shots, but we just couldn’t get them by – they were blocking a lot of shots” Chisago Lakes coach Paul Gibson said. “Our possession in their end was mostly behind their net and they contained us well there.”

New Prague’s Alex Gregor led the Trojans offensively with a game-high five points (2-3–5) in registering his 21st and 22nd goals of the season.

The Wildcats scored the first goal of the game but they were only able to muster up one shot on goal in the second period and three shots in the third. Blake Lizotte scored on one of those third-period shots, but the game was mostly out of reach by that time.

“It was a great effort by all of our players, we used our depth and sometimes when you use your depth it can limit the energy of the other team,” New Prague coach Chris Lonke said. “Before sections I said ‘if we can be the best defense team than we’d have the best chance to win the section’ which we did and now we’re carrying that over into the state tournament.”

Seth Kriha scored for the Trojans and tied the game at one apiece just minutes after William Knaak gave New Prague an early lead. The teams were tied 1-1 after the first period but New Prague ran away with the game when they scored three goals in a 2:38 span to start the second frame.

“I thought we responded well to their power-play goal by getting one back,” Lonke said. “Keep doing the things we need to do and shoot the puck. We didn’t shoot the puck and we came out and did that and got the results.”

Alex Gregor scored his first of two just 46 seconds into the second period. Austin Issacson scored the eventual game winner just 18 seconds later on a breakaway. Gregor pretty much sealed the game up with his second goal at 3:24 of the period giving the Trojans a 4-1 lead. Kriha scored his second goal of the game just 90 seconds into the third period to really damper any intentions of a Wildcat comeback.

“We’ve been able to battle back a lot this year and we’ve been used to it” Kriha said. “In my opinion we didn’t feel any panic at all.”

New Prague, in their first state tourney appearance, will face somewhat familiar foe Hermantown on Friday in the semifinals at 11:00 a.m. The two teams have faced each other once per year for the past few seasons, including this year when the Hawks took it to the Trojans 7-3.

“We were really excited; when the draw came out we liked that we were playing Hermantown,” Lonke said, “If you’re going to be the best you’ve got to beat the best and we were questioning if we even belonged on the same sheet of ice; but come Friday I don’t think that a question anymore.”