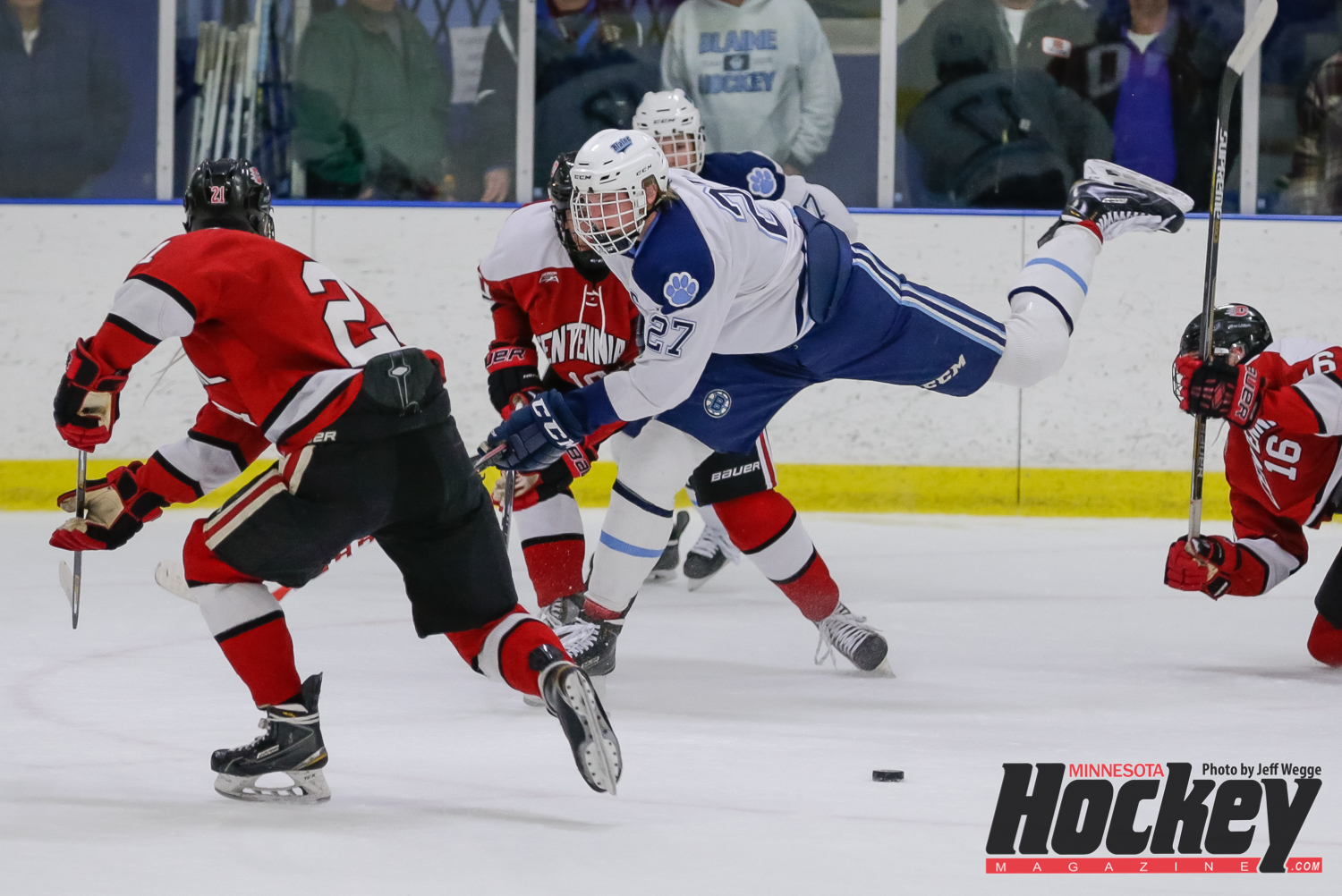 Blaine forward Riley Tufte’s five points led the Bengals back to the state tournament with an 8-1 win over Centennial in the Section 5AA final at Aldrich Arena on Feb. 26, 2015. (MHM File Photo / Jeff Wegge)

It’s 3 p.m. on a Monday afternoon at Fogerty Arena in Blaine. A hulking figure steps onto the ice. He is 6-foot-5, but in the three strides it takes him to get over the bench, you see very little of the awkwardness that you might expect.

This is not a basketball player on skates. It’s the next great star to come out of Blaine, Riley Tufte.

When you see him, you do a double take. He wears jersey number 27, given to him as a freshman by former head coach Dave Aus who thought he bared a striking resemblance to another player he once coached.

He has blonde hair and a baby face that almost seems out of a place on a monster of his size. He is Nick Bjugstad 2.0 and he is not upset about that. Because like Nick, Riley also hopes of being in the NHL someday and he has a very good chance.

In fact the two actually talk and text regularly. Nick is friends with Riley’s older brother and has been instrumental in guiding him through a high school career that mirrors his. Sometimes Riley even returns the favor – like giving Bjugstad guff for a recent fight that left him bloody.

Riley is skilled. He doesn’t move like a man who is 6-foot-5. He glides with the ease of Zach Parise, stick handles as smoothly as Patrick Kane but with the frame of John Scott. He is a walking (and skating) oxymoron. Like Nick Bjugstad he shouldn’t be able to do the things he does at his size, but he doesn’t go by the script.

The biggest difference between Nick and Riley comes in their temperament. Riley is polite and kind in interviews, but when you put him on the ice?

Although by talking to him you wouldn’t know it.

There is also one more – rather large—difference. Riley has type one diabetes, which he was diagnosed with at 11-years old.

Not only has he played, he has excelled. Tufte’s 26 goals through 16 games are good for fourth in the state and he is expected to be the highest Minnesotan drafted in June’s National Hockey League draft.

He also has a leg up on many other kids his age when it comes to taking care of their body. While most high school aged kids could care very little about what they are putting into their body, Riley has to know.

He makes sure to eat one hour before a game and sometimes during the game and he drinks Gatorade throughout the game as well. Lessons like these aren’t usually learned until a player gets to college, or even the professional level, and has the benefit of a nutritionist. For Riley it’s just one more aspect of who he is that puts him above the rest.

But what is it about the Blaine/Spring Lake Park area that keeps churning out hockey stars? Nick Bjugstad, David Backes, Matt Hendricks, Brandon Bochenski just to name a few have all played games at Fogerty Arena and have gone on to the highest level of hockey.

Blaine is not the first place when you think of elite hockey talent but a quick glance at the names above might suggest differently. Carroll says it’s because of the way the community supports the program. Like many cities kids grow up playing together at a young age and stay together as they rise through the ranks.

They end up feeling a loyalty to the programs as well which is why, when a star talent like Tufte has a chance to go play in the Unites States Hockey League, he passes — deciding to instead finish out his senior season as a Bengal.

Let’s go back to Fogerty Arena on that same Monday afternoon. Practice is underway and the team is doing breakout drills. Tufte is hard to miss, because he is a men amongst boys and because his intensity is palpable. He is yelling – not just at his teammates to work hard – but also at himself, when a shot goes wide or a pass is not right on the mark.

And maybe that is the real reason Tufte is destined to be such a star, because he won’t let himself off the hook, ever. In the end, that is the intangible quality that separates a good player from the star; the guys we don’t hear of past high school from the Bjugstad’s, the Backes’ and the Hendricks’. It’s the drive to know you’re the best and the desire to stay the best no matter what level you’re playing at.

Riley Tufte seems to exhibit that from high above his competition as this giant young man hopes to continue is rise to stardom.