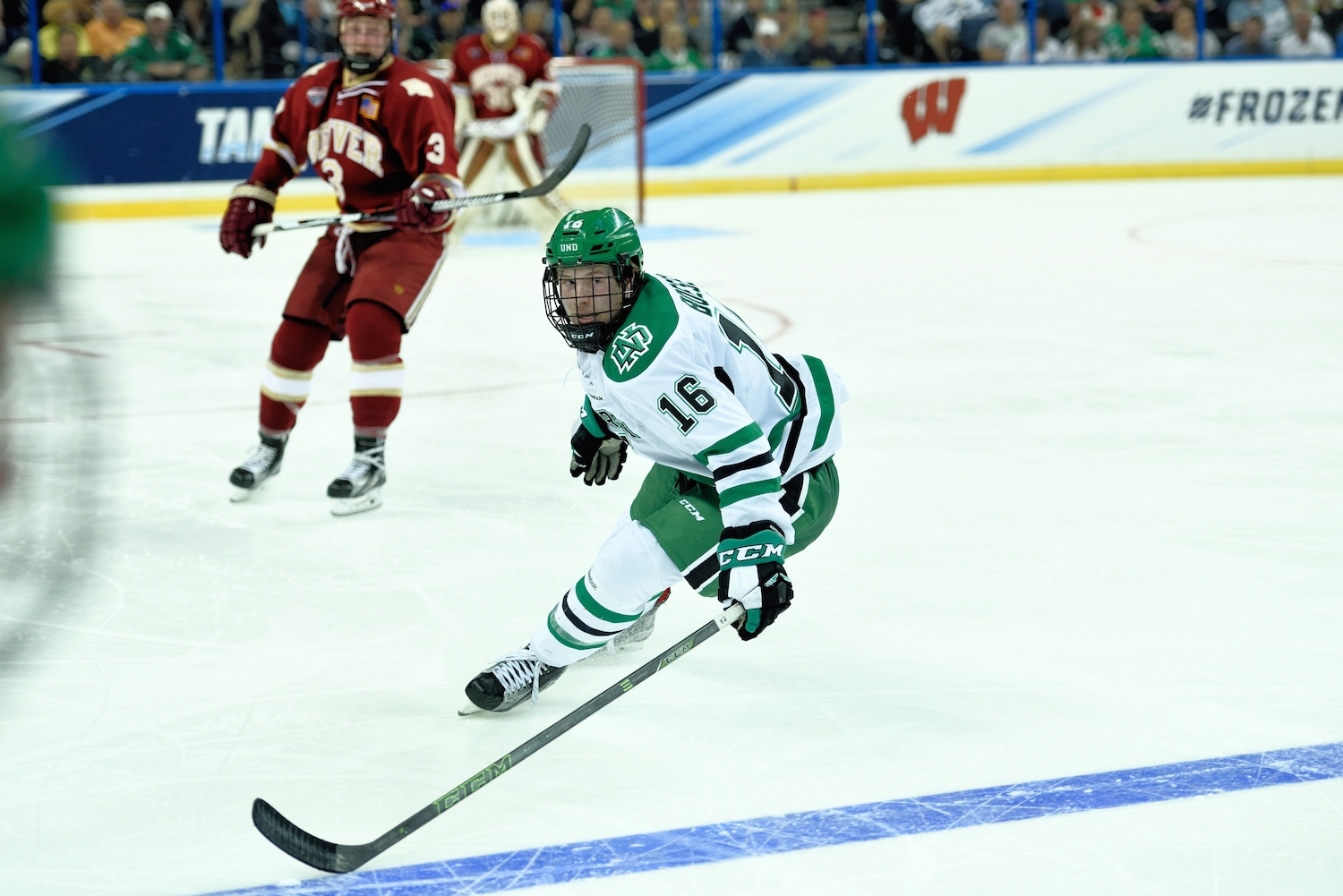 TAMPA, Fla. — The joke on the ‘CBS Line’ for the University of North Dakota men’s hockey team takes a shot at the youngest of the three players.

“We always joke around, telling him to pass the puck because all he does is score,” Caggiula said of Boeser, who has 26 goals. “A lot of people don’t realize how good his vision is. He can make plays all over the ice, not just scoring goals.

“He made a great play to me on my first goal with a saucer pass behind the defenseman and a great play to set up the third one.  He’s been huge for our line and he’s a freshman, but he doesn’t act like a freshman. He’s a very mature kid on and off the ice and I think that’s what makes him special.”

Boeser, a 19-year-old from Burnsville, had assists on the first and third goals for the Fighting Hawks in a 4-2 win over Denver in the semifinals of the NCAA Division I Frozen Four on Thursday at Amalie Arena. Boeser set up Schmaltz for the game-winning goals with less than a minute left to play and the Fighting Hawks added an empty-net goal with 1.8 seconds left.

Boeser and his linemates are a big reason why. Boeser, a first-round draft pick of the Vancouver Canucks in 2015, has 56 points in 41 games and was a plus-3 in the semifinals win.

“He’s a fun player to play with (on a line) and he thinks the game the same way as me and Drake,” Schmaltz said of Boeser. “We like to make plays, but we also like to play hard away from the puck. A staple of our success is how hard we play away from the puck and get on offense.

“(Boeser) has been a huge piece to our line and, hopefully, we can keep it rolling on Saturday.”

Boeser, the NCHC Rookie of the Year and an All-NCHC first team pick, played last season for the Waterloo Blackhawks in junior hockey in the United States Hockey League. He was a USHL first team all-star and tied for the league lead with 35 goals in 57 games and was third in the USHL in points with 68.

He said that playing on a line with Caggiula and Schmaltz has exceeded his expectations for this season.

“I really can’t explain the feeling of the opportunity to play with these guys … it’s been tremendous,” Boeser said. “With the North Dakota fan base and the tradition … you can’t really describe it. You just have to live it and it’s just been tremendous.”

Austin Poganski, a sophomore right wing from St. Cloud and a St. Louis Blues draft pick, plays on the second line for North Dakota and said that watching Boeser play this season has been special as well.

“He’s done it all and it’s hard to explain all the things he can do with the puck,” Poganski said of Boeser. “He just plays with so much poise.”

That poise helps him take the good-natured ribbing from his linemates and turn it into a positive.

“They say that I have tunnel vision and just shoot the puck,” Boeser said with a smile about his linemates’ criticism of his play. “I’ve been proving to them lately that I can get an assist too.”

Three players from Minnesota played Thursday for the top-ranked Quinnipiac team that will play in its second national championship game in four years.

Left wing Bo Pieper, center Tommy Schutt and defenseman Derek Smith were each in the lineup for the Bobcats in their 3-2 win over Boston College on Thursday.

Pieper, a sophomore from Roseville, was on the second line for Quinnipiac and had two shots on goal. Pieper, who is 5-foot-11 and 185 pounds, has five goals and four assists in 41 games this season and eight goals, 14 assists in 79 career games.

Schutt, who is from Chanhassen, played on the third line for the Bobcats. Schutt, a 6-0, 190-pound junior, had a team-leading five blocked shots, two penalty minutes and two shots on goal. Schutt has six goals and five assists in 42 games this season and 12 goals, 15 assists in 117 career games.

Smith, who is from Apple Valley, was on the third defensive pairing and had one shot on goal. Smith, a 5-11, 185-pound junior, has three goals and 13 assists in 36 games this season. In 107 career games, he has five goals and 34 assists.

The trio helped Quinnipiac kill 4 of 5 penalties against Boston College.

Adam Gilmour, a 6-foot-3, 193-pound junior from Hanover, Massachusetts, played on the Eagles’ top line. Gilmour had four shots on goal in the game. For the season, he finished with 12 goals, 14 assists in 41 games. In 119 career games, Gilmour has 28 goals and 45 assists. He was a fourth-round pick of the Wild in 2012.

Alex Tuch, a 6-4, 220-pound sophomore from Baldwinsville, New York, had Boston College’s first goal, four shots on goal and was a minus-1 on the second line. For the season, he had 18 goals, 16 assists in 40 games. For his career, he has 32 goals, 30 assists in 77 games for Boston College. Tuch was a first-round pick of Minnesota in 2014.