Twice in a Lifetime Experience 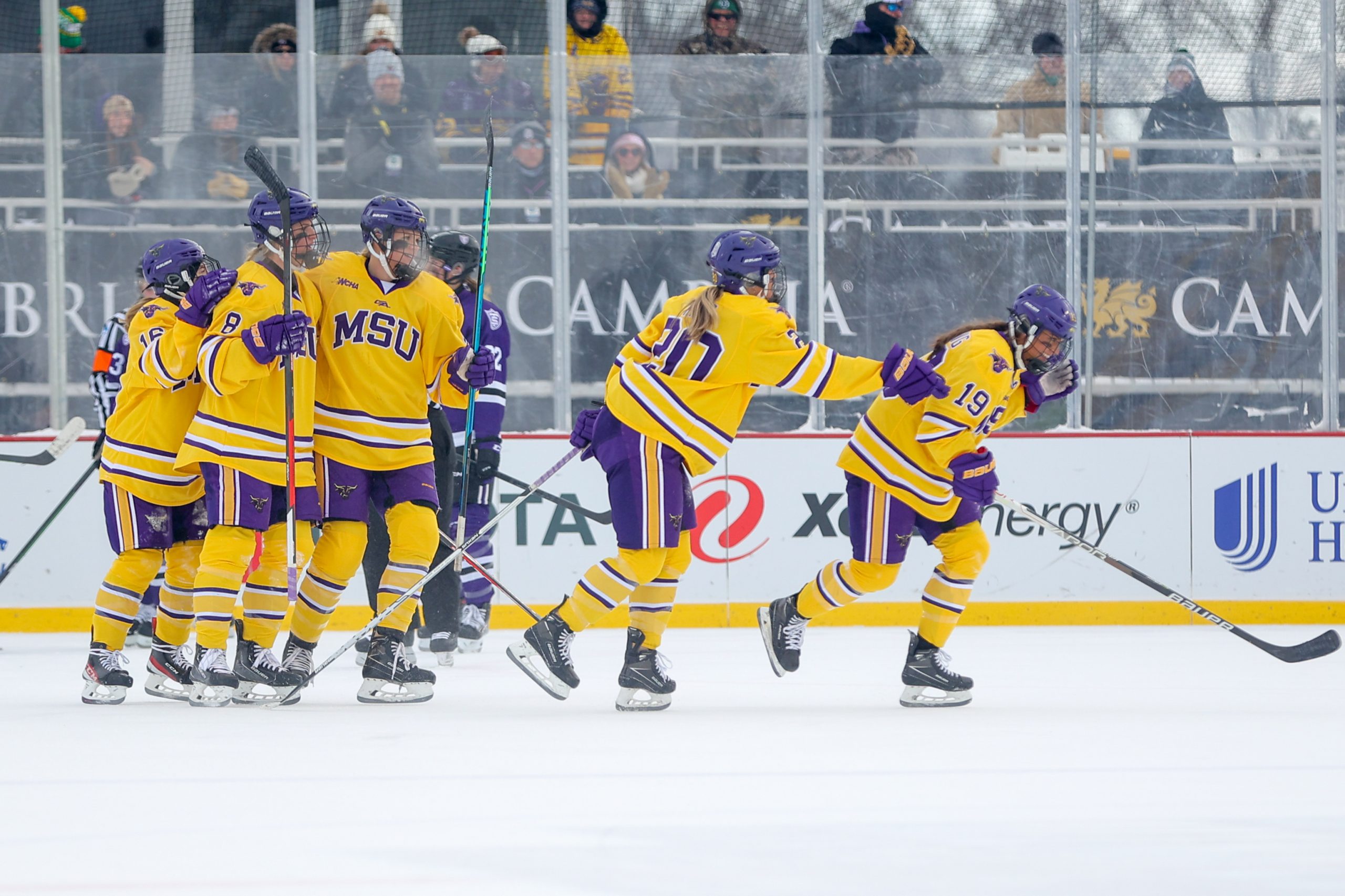 MANKATO, Minn. — Fresh off of snapping its 53-game losing streak to Minnesota, the Minnesota State University women’s hockey team completed a sweep of St. Thomas to put a bow on the week’s Hockey Day Minnesota events at Blakeslee Stadium in Mankato. The 3-1 victory extended the Mavericks’ winning streak to three games, matching a season high.

Although it wasn’t included in Bally Sports North’s slate of televised games, Minnesota State took to the outdoor ice with a team loaded with experience on Hockey Day Minnesota’s biggest stage. In fact, of the seven Mavericks who have participated in the event previously, six of them skated their second games on Hockey Day ice in Mankato.

“Both experiences were great on their own … but I think this one was extra special because it’s been a week long event and just to be able to close it out, it’s been pretty great,” said senior Taylor Wemple, who skated for St. Cloud State in the Huskies’ shootout win over over Minnesota Duluth in 2018 on the shores of St. Cloud’s Lake George.

The list includes senior defenseman, and team captain, Anna Wilgren, who sat out the outdoor game, as she will her team’s remaining games this season, to preserve eligibility after missing much of her senior year on the U.S. women’s hockey residency roster. Wilgren, who played in MSU’s bitterly-cold 2-1 win over Bemidji State in 2019′ event, was one of Team USA’s final three cuts prior to the 2022 Olympic roster reveal at the NHL’s Winter Classic.

Senior assistant captains Jessia Kondas, Brittyn Fleming and Claire Butorac are also Bemidji veterans along with fellow senior Brooke Bryant. Meanwhile, another transfer, junior Sydney Shearen, skated for the Gophers in their 2-1 win over Ohio State in 2020 at Parade Stadium in Minneapolis.

Butorac, a former Andover High School star, had the added benefit of hosting her alma mater which shut out Edina 4-0 to open Hockey Day’s televised action on Saturday morning. She spent time with the team showing them around the rink at Mayo Clinic Health System Event Center.

“It was fun just to see all the little girls I used to coach that are in high school now and see my high school coaches and just wish them luck before they got to come out here and experience Mankato,” Butorac.

Teammates who had yet to play in the Hockey Day environment asked those who had for advice going into the weekend but it mostly came down to preparations for the cold. The majority of the conversations, the players said, concentrated on sharing memories they’ll hold onto forever.

“The key of these games is to just have fun,” said Shearen, a Hugo, Minn. native who played her high school hockey for White Bear Lake. “You only get this opportunity once in a lifetime; I was lucky enough to get twice.”

Butorac says this experience easily ranks in her top five as a Maverick.

“It’s awesome, this is a great stadium to play in,” Butorac said. “This town supports our school so much, so I’m very grateful to be a Maverick, especially today.”