The Two Sides of Abby Cooper 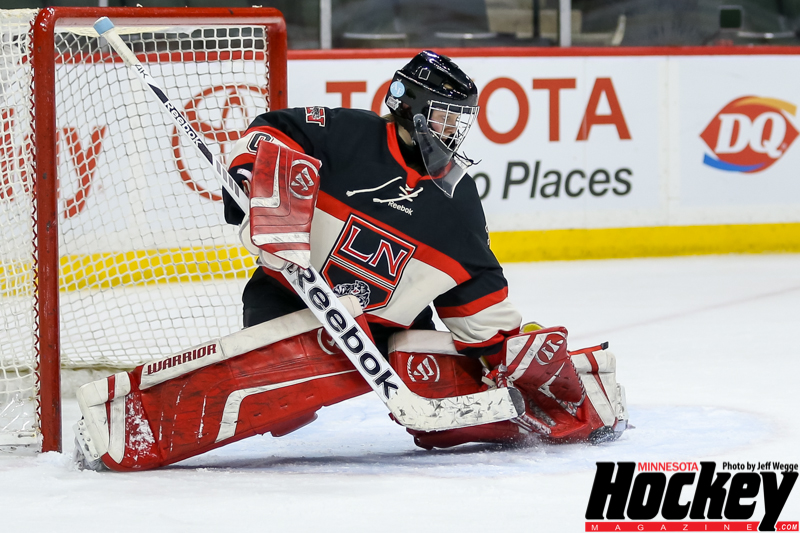 Lakeville North’s Abby Cooper is a quiet, unassuming kid off the ice. Put on the goalie pads and the senior-to-be becomes a completely different person. Like the fictional Dr. David Banner and the Incredible Hulk, behind that Panthers’ goalie mask, Cooper transforms from mild mannered and unassuming to one of the most intense and successful goalies in Minnesota.

“Abby Cooper is one of the quietest, shyest people you are ever going to meet,” Panthers’ coach Buck Kochevar said. “Then when she puts on the goalie equipment and her alter ego comes out. She turns into this monster in the net. What is behind the mask is a complete different Abby. After the game she takes of the mask and you wouldn’t even know she played a game.”

As a junior, in just her first season as the starting goaltender, Cooper led the state with 14 shutouts and the Panthers to within one win of the 2013-14 Class AA state title game.

“She is very fundamentally sound,” Kochevar said. “Her angles are on. She does the little things like steering the puck into the corners. She makes sure the defense is picking up the right people. She is solid in all areas and is a smart goaltender.”

Kochevar’s system has been a part of not only Cooper’s success, but all the goalies that have come through his program.

“Our D-zone coverage has kept us in a lot of games,” Kochevar said. “Our centers are always down low and they cover both corners and we keep our wings up high always with two in the slot. We block a lot of shots. In the state tournament two years ago we set a state record of forty eight blocked shots.”

Cooper played in just a handful of games in 2012-13, backing up Cassie Alexander, but she benefited from Alexander’s mentoring according to Kochevar.

“They bonded together and helped each other out. Watching a goalie for three fourths of the year she learned a lot. They would go to goalie camps together.”

After playing a supporting role as a sophomore she was thrust into a leadership role. She is also paying forward the lessons she learned from Alexander and mentoring the two girls that serve as her back ups.

“The backup goalies look at all the hard work she puts in,” said Kochevar, who was an assistant at Lakeville High School before they split into North and South. “One of the backup goalies – this is her third year playing goalie ever – you should see how far along she is now just from hanging out with a mentor like Abby Cooper. She believes bonding and learning together. She is a great teacher of the game.”

Cooper’s understated style is one of the many reasons she makes it easy to play in front of her.

“She is a quiet leader,” said the only coach the Panthers have ever had. “She gets embarrassed when we give her a game puck. She believes the people around her make her better. She would be the first one to tell you ‘my defense helped me out, it was a team effort’.”

A coach’s dream, Cooper will do anything her coaches ask of her. She gets great grades in school and she mentors goalies in the youth program.

Coming up through the youth program herself she slowly developed her game to the point where Coach Kochevar could tell even in practice as a sophomore back up that she was destined to be an elite level goalie.

This offseason Kochevar doesn’t have a specific area that he feels Cooper needs to focus on, but because of the number of senior contributors the team is going to have to replace this coming season he wants her to be ready for the possibility of an increased workload.

In the offseasons she has played lacrosse and also plays on Select Seventeen hockey teams – sometimes against a Kochevar coached team. She goes to goalie camps and comes in to lift weights.

If she continues to follow the path she is on, playing hockey past high school could be in Cooper’s future. Kochevar said most of the Division III schools in the Midwest as well as some Division I schools out east have shown interest.

Future recruiters and current opponents beware. Don’t be fooled by Abby Cooper’s calm exterior. In public she is Ms. Cooper. Behind the goalie pads she becomes a hockey version of the Incredible Hulk – an alter ego capable of making things very difficult for her opponents.