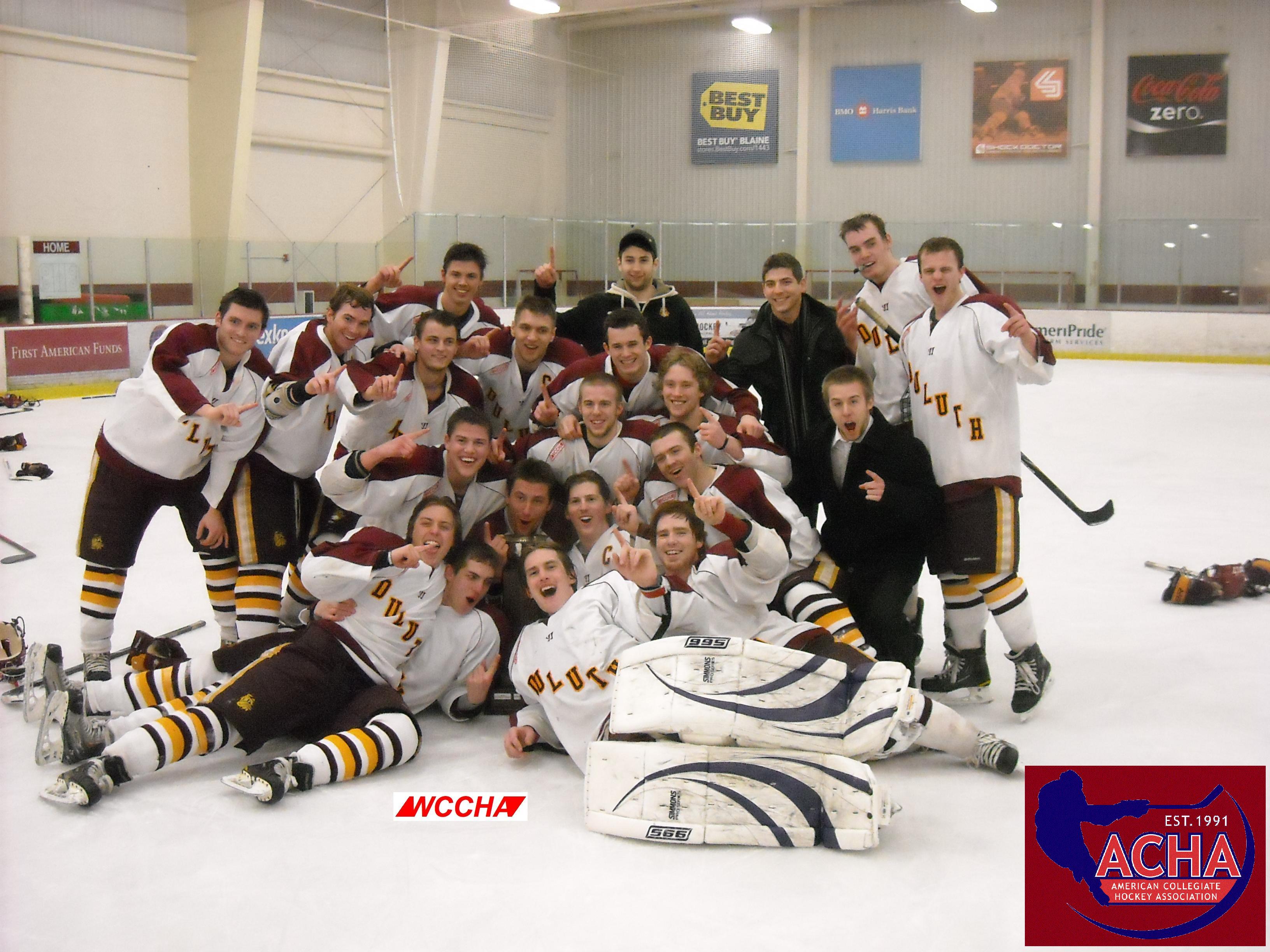 Overtime was the rule on Saturday night at the Schwan’s Super Rink as all three of the final games of the WCCHA men’s club hockey tournament could not be decided in regulation play.

UMD and St. Cloud State earned the right to play in the championship game after winning their semi-final games earlier in the day.  St. Cloud stunned a Northern Michigan team that was undefeated in conference play, 4-1.  A late goal in the third period put St. Cloud up 2-1 and forced UNM to pull their goalie.  St. Cloud took advantage and scored twice into an empty net, ending UNM’s efforts to win another WCCHA tournament.  Meanwhile, UMD came from behind late in the third period against a rugged Waldorf College team to hold on for a 4-3 win and their first chance for a WCCHA title.

Splitting their series during league play, the title game was close from the drop of the puck.  UMD took early leads, but St. Cloud kept finding ways to tie the score.  With the score tied at 3-3 at the end of regulation play, both teams had terrific opportunities to win the game in OT, but both goalies made several outstanding saves to keep the game alive.  Finally, a breakaway by Mike Swanson resulted in a penalty shot call after he was tripped while attempting a shot on goal.  With a large crowd watching, he calmly deked the St. Cloud goalie and slid the puck under his outstretched pad for the 4-3 victory and UMD’s first WCCHA championship.

Northern Michigan and Waldorf did not disappoint their fans in the third place game.  Waldorf took an early 2-0 lead, but goals by UNM in the second period and late in the third period tied the score at 2-2 and forced overtime.  UNM scored for the 3-2 OT win when a wicked wrist shot from the top of the circle found the far upper corner of the net, ending a physical and up-tempo game.

St. Thomas earned their way to the final game by beating University of Wisconsin earlier in the day, 4-2.  A late entry into the WCCHA tournament, UW-Eau Claire upended the University of Minnesota, 7-3, and put them into the final game of the losers bracket.  In a wide open, high scoring game, UW-EC took several 2-goal leads, but could not close the deal against a stubborn St. Thomas group.  St. Thomas finally tied the score at 5-5 late in the third period and forced the extra session.  Early in OT, a shot on a partial breakaway from a tough angle found it’s mark and UW-EC prevailed, 6-5.

Go-ahead goal early in the game

Traditional handshake after a hard-fought game