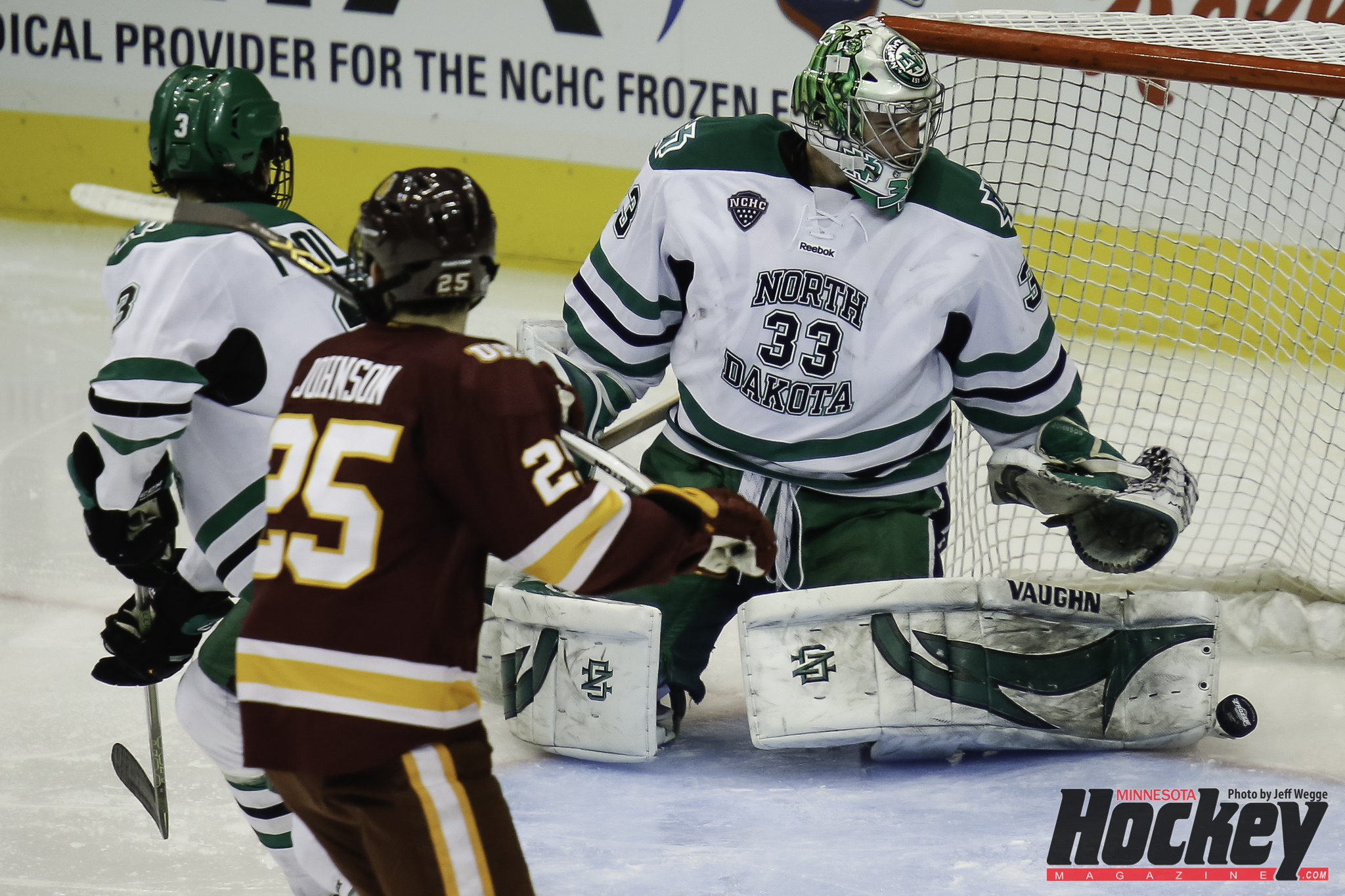 Minneapolis – After losing all four meetings with North Dakota during the season, Minnesota-Duluth appeared in trouble when the Fighting Hawks scored in the first minute of the National Collegiate Hockey Conference Frozen Faceoff Friday.

To add to their predicament, the Bulldogs needed a win to keep their NCAA tournament hopes alive.

“Our guys, like in the last month or so, kept their composure and kept playing,” UMD coach Scott Sandelin said.

The Bulldogs, who won their final four games of the regular season and then two straight from Miami (Ohio) to enter the Frozen Faceoff with a 17-14-5 record, got two goals from Dominic Toninato and 22 saves from goaltender Kasimir Kaskisuo and rallied to knock off the top-ranked Hawks 4-2 at Target Center.

UMD’s Toninato and Alex Iafallo scored in the first 3:46 of the second period and the Bulldogs got another goal from Austin Farley nine minutes later to take control.

“Every line had it going at the start of the second,” Toninato said, “and we went from there.”

The Fighting Hawks responded with 14 shots in the second period and five in the third, but were able to beat Bulldogs sophomore goalie Kaskisuo just once over the final 40 minutes.

“Kas played tremendous for us all year,” Toninato said, “and it’s good we can finally start getting some wins for him.”

The victory not only locked up a berth in the NCAA tournament, but gave UMD a shot at the NCHC playoff title for the first time.

“It’s always good when you can play for a championship,” Sandelin said. “We talked about it a month ago: Where we were at, we needed to get to our tournament and try and win the tournament. That was the surest way to get in. We put ourselves in a position to do that, so it feels good.”

Nick Schmaltz scored for North Dakota in the first minute Friday afternoon, and the 1-0 lead stood through the first intermission. But UMD came out strong, tying the score just 28 seconds into the second period.

Fighting Hawks coach Brad Berry, while admitting that UMD probably had more at stake than his team in this game, noted that whatever the cause, the Bulldogs were clearly motivated.

“I saw a team that was committed to not only play hard with the puck, but without the puck,” Berry said. “There was a commitment there.”

North Dakota dodged a five-on-three disadvantage for 1 minute, 18 seconds in the second period, but UMD refused to allow that to return the momentum to North Dakota.

UMD outshot the Hawks 26-24 for the game and yielded very little when Berry pulled goalie Cam Johnson for more than the final three minutes. Minnesota-Duluth simply made it difficult for the Hawks to get close to their net all evening.

“Give their D-corps props,” North Dakota defenseman Troy Stecher said. “They stuck on our forwards pretty tight, and there wasn’t much time and space out there.”

That was the key for UMD, which stopped North Dakota’s eight-game winning streak in the process.