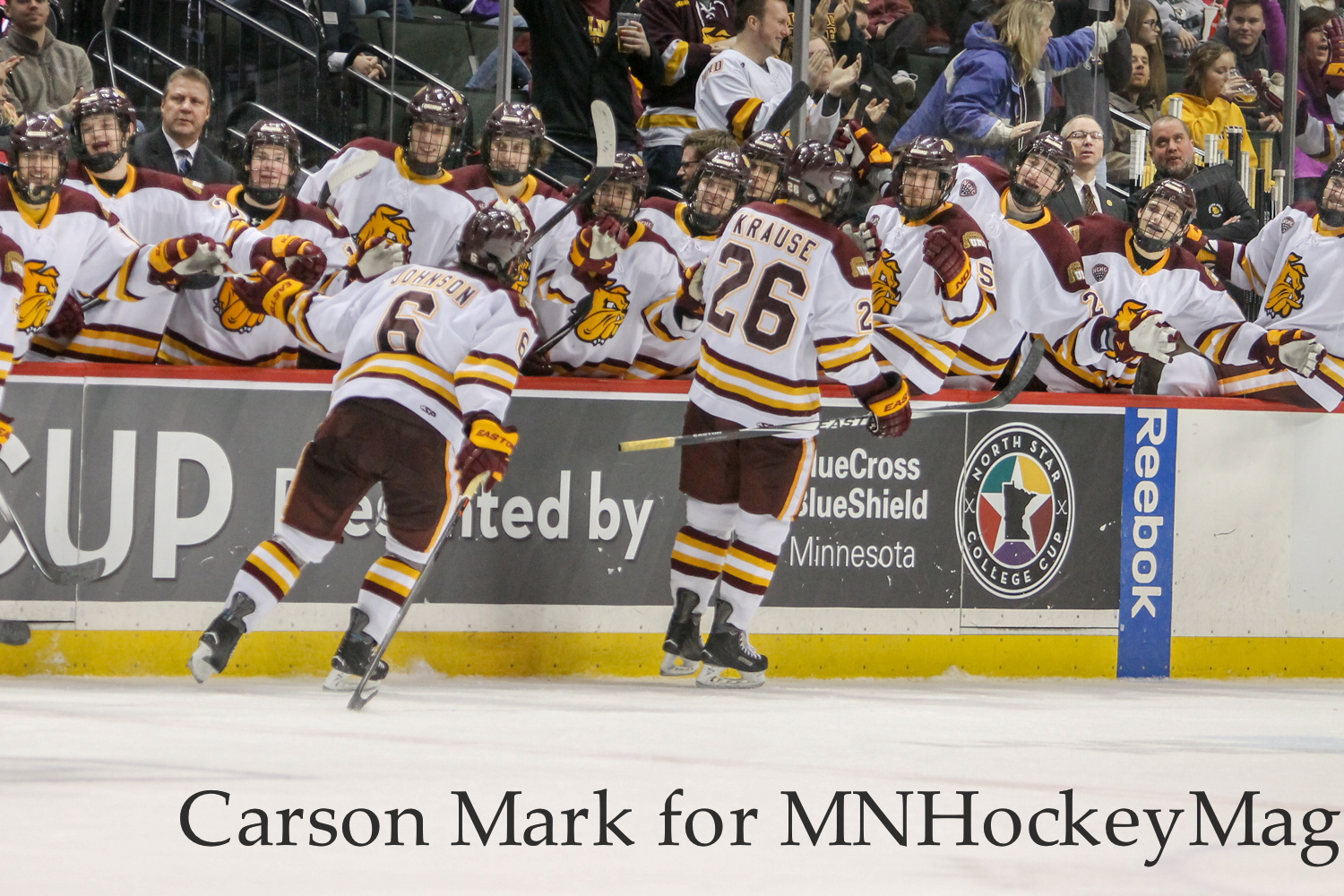 UMD’s Adam Krause #26 celebrates with teammates after one of his two goals in the Bulldogs’ 2-1 win over Minnesota on Saturday at the Xcel Energy Center. (MHM Photo /  Carson Mark)

SAINT PAUL – One shot was all it took. And that’s good because that’s all Minnesota-Duluth had registered against Minnesota through nearly 18 minutes of the third period in Saturday afternoon’s North Star College Cup consolation game at Xcel Energy Center.

UMD captain Adam Krause scored just his fourth goal of the season, but second of the game, on the Bulldogs’ first shot of the period with just 2:19 to play, lifting his team to a dramatic 2-1 win over the Gophers. Minnesota had outshot Minnesota-Duluth 11-0 to that point.

Krause’s linemates Alex Iafallo and Dominic Toninato assisted on each of his goals and Matt McNeely made 31 saves to backstop the victory. Minnesota’s Adam Wilcox took the loss with 23 saves.

“It’s funny how the game works,” Minnesota-Duluth coach Scott Sandelin said. “Sometimes you get 40 of them (shots) and don’t score and sometimes you get fewer and score more. But we’ll take it because it’s a good win for our team.”

“We thought that game was ours,” Gopher captain Kyle Rau said. “We like the way we played the whole game, (Wilcox) played unreal, so it was just one of those games where they capitalized on their chance and we had multiple chances to get ahead in the third and we couldn’t bury it.”

Nursing a 1-0 lead late in the second period, the Bulldogs’ Carson Soucey went off for charging at 19:53 giving the Gophers a power play on fresh ice to begin the third and it paid dividends.

Just 31 seconds in, Rau took a Justin Kloos feed from behind the net and buried his 12th of the year to knot the score 1-1.

Minnesota received a much-needed spark from the goal and reeled off the period’s first 11 shots while holding the Bulldogs without until the 17:41 mark.

“We knew it was an important [penalty] kill and they got momentum from that and had us on our heels,” Sandelin said. “We kind of weathered that and got some saves and buried an opportunity.”

Only seconds prior to Krause’s game winner, Minnesota had a golden opportunity on a 2-on-1 but Travis Boyd’s pass to Sam Warning failed to connect.

“I like the way we did a lot of things tonight, we gave up 22 shots on Friday and 26 tonight,” Minnesota coach Don Lucia said. “But when we have a chance, we have to finish.”

The Bulldogs got on the board first on Krause’s third goal of the season at 14:04 of the opening period. Krause, honored this week with nominations for both the Senior CLASS and Hockey Humanitarian awards, had his backhanded wraparound attempt denied by Wilcox but the Hermantown native poked in his own rebound.

The game was a rematch of the inaugural North Star College Cup title game but the stakes weren’t quite the same this time around. One year after Minnesota defeated Minnesota-Duluth in a shootout to become the first to hoist the glossy wooden trophy, the two squared off in the second-year tournament’s consolation game.

The matchup was set the night before when unranked Bemidji State blanked the No. 7 Bulldogs 4-0 behind 28 Michael Bitzer saves and top ranked Minnesota State beat No. 17 Minnesota 4-2 to create an all-WCHA championship game.

In typical UMD/Minnesota fashion, the game was a physical contest with multiple crease area scrums, hard hits and jostling after the whistle. There was a sense these were two teams with some pent up frustration.

Sandelin agreed but said it was important for the Bulldogs to limit Minnesota’s power-play opportunities, recalling how critical that was to UMD sweeping the Gophers in mid November.

“The game’s got emotions and things are going to happen but I thought that was a real key, to not get into that,” Sandelin said. “But you could tell both teams were trying to get a win desperately.”