Bulldogs to lean on depth in effort to rise in NCHC standings. 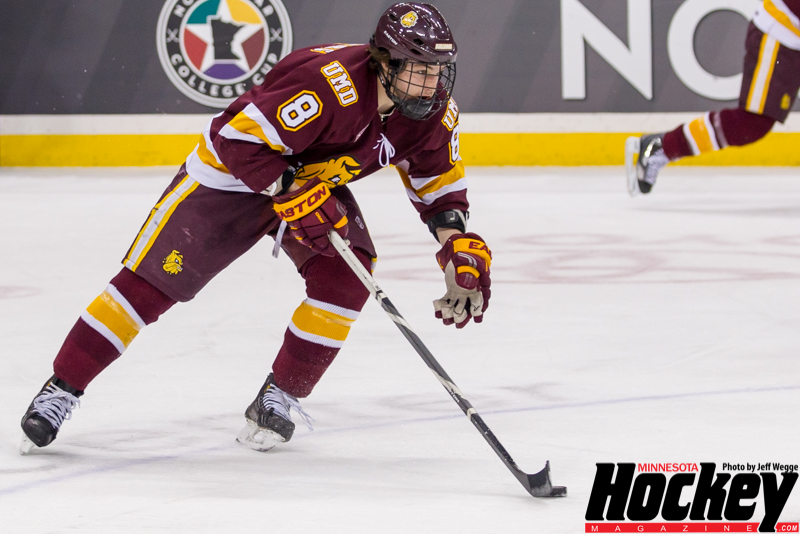 UMD forward Kyle Osterberg was the NCHC’s Rookie of the Week four times last season in addition to being the first recipient of the league’s Rookie of the Month Award. (MHM Photo /  Jeff Wegge)

Bulldogs to lean on depth in effort to rise in NCHC standings.

If there’s one thing the Bulldogs of late know, it’s youthful exuberance.

While the leadership of the upperclassmen should certainly not be discounted, the last two years the Bulldogs have seen the freshman classes have combine for over 180 points. Last season, the Bulldogs saw forwards Kyle Osterberg and Alex Iafallo finish third and fourth in scoring with 14 and 11 goals respectively.

With that, UMD returns five of its top six point producers from last season, losing only forward Caleb Herbert to the Washington Capitals organization.

“I think up front we have a lot of depth, last year we had the same thing,” coach Scott Sandelin said. “We have a lot of guys that understand how hard it is to win and we have an incoming freshman class that will be contributors for us, but they don’t need to be right off the bat.”

Last season the Bulldogs iced a fairly green defensive lineup which, although they played well, will definitely benefit from another year together. If all goes according to the plan Sandelin hinted at during Wednesday’s press conference, expect to see senior Derik Johnson join the squad, meaning at least four blue liners who have more a year or more of experience under they’re belts.

“I thought for the most part it was a question mark last year, especially when you have two guys coming in that are true freshman who kind of got thrown into the fire and I think they did a great job,” Sandelin said.

Goaltending is the other unknown for the ‘Dogs, who will try out either junior Matt McNeely or freshman Kasimir Kaskisuo. Sandelin hopes to have one of them take over a starting position and this weekend’s first matchup with No. 1 Minnesota will be a serious measuring stick between the two.

The Bulldogs take on the Gophers at 2 p.m. on Friday as a part of the Ice Breaker Tournament at Notre Dame University.

2013-14 Postseason Finish: Lost to Western Michigan in the first round of the NCHC playoff

Why the Bulldogs will exceed expectations: If the Bulldogs can get juniors Austin Farley and Tony Cameranesi back to the scoring they produced their freshman seasons, and sophomores Kyle Osterberg and Alex Iafallo to stay away from that sophomore slump, they will be a serious offensive threat. Forwards Karson Kuhlman and Brett Boehm will be looked at as freshman contributors as well.

Why the Bulldogs will fall short of expectations: The biggest question mark for UMD this season in definitely in net. Two years removed from a 24-start freshman season, Matt McNeely will be pitted against newcomer Kasimir Kaskisuo. So far the team has not decided on a starter, but if coach Scott Sandelin gets his way, they’ll be giving the majority of the minutes to one of those guys as opposed to a 1A/1B system.