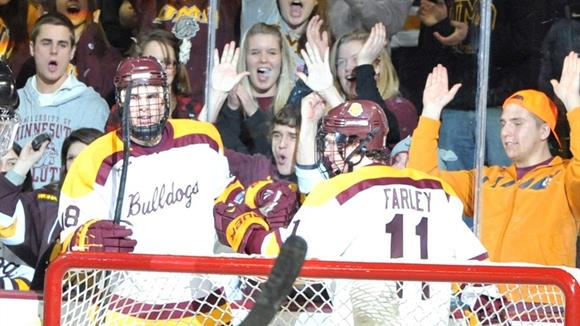 If Monday night’s 7-1 exhibition win against Lakehead University is any indication, the UMD Men’s hockey club is poised for success as the puck drops this week. 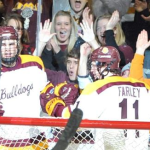 If Monday night’s 7-1 exhibition win against Lakehead University is any indication, the UMD Men’s hockey club is poised for success as the puck drops this week. Check out our season preview, predictions and notes here!Friday evening the University of Minnesota Duluth Men’s hockey team will open up the season in front of the home crowd, hosting Michigan Tech in a set of weekend games at Amsoil Arena. Predicted to place sixth out of eight teams by the time the season comes to a close in 2014 by a National Collegiate Hockey Conference Poll in September, the Bulldogs are ready to come out strong and prove the voters wrong.

“We were talking about it and they could’ve pulled names out of a hat for that poll and it was something they had to put together,” shrugged Adam Krause, current captain of the Bulldogs in reference to the NCHC preseason poll, following a 7-1 exhibition win over Lakehead University on Monday night. If there is one thing the Captain isn’t worried about it’s what the poll had to say about his squad. “There are a lot of good teams [in the NCHC],” says Krause, “If we can keep the scoring going and stay disciplined in the different zones we’re going to be fine in this league. We’re going to have some tough games obviously, but we’ll be good.”

When analyzing the 2013-14 Bulldogs, the two things most observers will agree on is that UMD’s power-play depth could be lethal but concerns exist about the adequacy of its blue line support. Last season 41 of the club’s 99 goals come via the power play. With the likes of Tony Cameranisi, Austin Farley, Caleb Herbert, Joe Basaraba and newcomer Dominic Toninato up front along with Andy Welinski and freshmen Dan Molenaar and Carson Soucy on the back end, Minnesota-Duluth’s two power-play units could be interchangeable.

Granted, the Bulldogs are going to have to better at even strength but the fact that they scored seven five-on-five goals against Lakehead is encouraging. Whether that was a preview of things to come or simply the result of playing an overmatched Lakehead team has yet to be determined.

With a relatively young and untested defensive corps it’s anybody’s guess as to whether or not the blue liners can provide enough coverage. The losses of Wade Bergman and Drew Olson to graduation left holes to fill on their own but Chris Casto’s departure to the professional ranks added salt to the wound. However, Welinski, highly regarded across the country as a player to watch, returns after an 18-point (4-14—18) rookie year and dished out three assists against Lakehead. Soucy (goal) and Molenaar (assist) showed promise in the exhibition as well, not to mention fellow freshman, Willie Raskob, who drew the praise of Bulldogs’ coach Scott Sandelin after Monday’s win.

“I thought Raskob on the blue line did a good job for a young kid coming out of basically high school,” Sandelin said. “Once he gets used to the pace I think he’s going to make a lot of plays with the puck.”

While there is no question that the level of play will only increase from here on out, players and coaching staff seem confident in the current state of the team, even at such an early stage in the season.

“I think we’ve got some pretty good depth up front. I thought our young defensemen played good too,” says Coach Sandelin. “If our supposed fourth line can score two or three goals every night I’ll be happy because it’s going to take the pressure off all those other guys. I think that was one of the big things last year is that we didn’t have that offensive depth. We were relying on maybe two or three returning guys and hoping that the two freshmen can come in and do something. Now this year they are another year older and Herbert and Basaraba had a good year and you bring in two more freshmen it gives you some balance.”

Whether or not the Bulldogs can finish higher than 6th in the NCHC is completely up to them at this point, regardless of age or experience. Although a relatively young team they boast seven NHL draft picks (Max Tardy – St. Louis Blues, Basaraba – Florida Panthers, Toninato – Toronto Maple Leafs, Herbert – Washington Capitals, Welinski – Anaheim Ducks, and Soucy – Minnesota Wild) shoring up the ranks who are not only ready to prove themselves to the UMD fan base but also to the organizations carefully watching their development.

As far as the season is concerned, Krause says, “It’s going to be awesome, we’re going to be a fun team to watch.”

Why the Bulldogs will exceed expectations: A young defensive corps will rise to the challenge of the NCHC and be able to produce offensively in addition to all four scoring lines creating more or less equal scoring chances.

Why the Bulldogs will fall short of expectations: A breakdown in the defensive zone and loss of scoring power from the projected third and fourth lines could hold the relatively young Bulldogs squad at bay.

** You can follow all the Minnesota Hockey action you can handle by following us on twitter at @MNhockeymag! You can also follow the author of this article @AmySnow17!