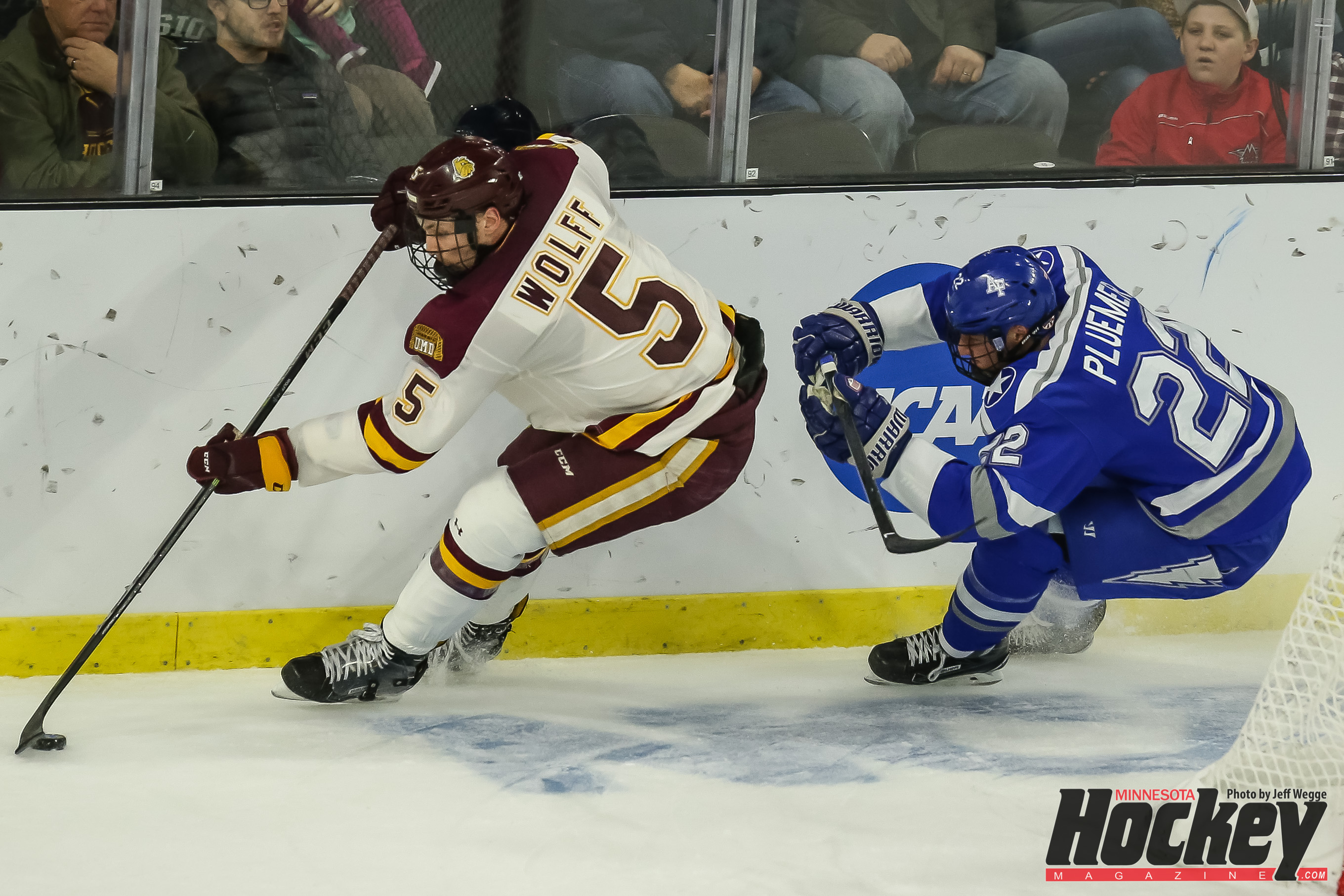 SIOUX FALLS, S.D. — Just a sophomore, Nick Wolff is Minnesota-Duluth’s most experienced guy on a defensive group that was one of the team’s question marks heading into the season.

Assistant captains Carson Soucy and Brendan Kotyk, along with Neal Pionk and Willie Raskob didn’t return to the blue line this year after helping the Bulldogs reach the national championship game in 2017. 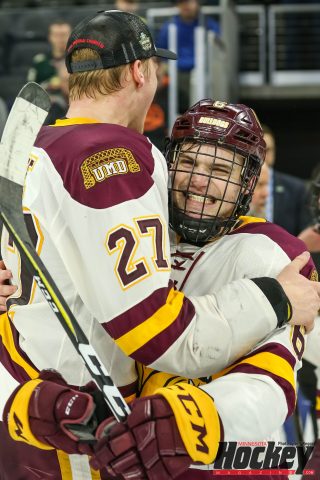 Would their replacements be ready to perform? How much would their youth and lack of experience affect UMD’s ability to hang with the skilled and talented teams in the NCHC?

“We lost a lot, but we knew had a lot of great guys coming in,” Wolff said. “I don’t really consider myself the ‘old guy’. I’m just as goofy as they are. I learn off of them and they learn off of me.

“Right now, they’re killing it. (The young guys) just played one of our best weekend series we’ve seen them play.”

The UMD defense has shackled opposing offenses with the nation’s eighth-best scoring defense at 2.14 goals allowed per game all season and in the NCAA tournament when it mattered most.

The Bulldogs punched their ticket to their second straight Frozen Four and sixth in school history after they eliminated Air Force 2-1 in the West Regional final Saturday night at the Denny Sanford Premier Center.

Minnesota-Duluth (23-16-3) will face the Denver/Ohio State winner in the Frozen Four semifinals April 5 at the Xcel Energy Center in St. Paul.

“It was a really new team this year and we came together as a group,” UMD sophomore forward Joey Anderson said. “Going to two Frozen Fours is really cool, but we’re not done yet and we want to reach that final goal of winning the national championship.

UMD was able to do what St. Cloud State couldn’t do against Air Force on Friday, and that was to jump on the Falcons early and create chances right from the start, but most of all, suffocate the Falcons with a stifling defense and puck-possession game.

The Bulldogs held their opponents without a shot on goal for an entire period for the second night in a row. Air Force didn’t get its first shot on goal until the fourth minute of the second period.

“From the start, they took us to the woodshed,” Air Force coach Frank Serratore said. “We haven’t seen speed like that all year.”

The Bulldogs took a 1-0 lead halfway through the first period when Dylan Samberg left the puck for Riley Tufte and went hard to the net, making contact with Air Force goaltender Billy Christopaulos at the edge of the crease. 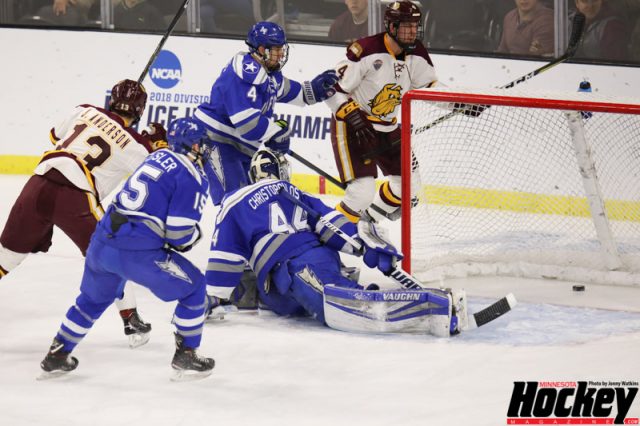 UMD’s Joey Anderson (13) and Dylan Samberg (4) watch Anderson’s shot settle in the back of the Air Force net to give the Bulldogs a 1-0 lead in the first period of their 2-1 West Regional final win over the Falcons. (MHM Photo / Jonny Watkins)

Tufte took a shot from the point and Joey Anderson cleaned up the rebound. Officials determined after a review that Samberg’s contact didn’t prevent Christopaulos from making the save, one night after Samberg interfered with the Minnesota State goalie to overturn a UMD goal in overtime.

Wolff made the score 2-0 a few minutes later with a wrist shot while trailing the play on a rush.

“I thought it was important to go out and get the first goal,” UMD coach Scott Sandelin said. “We were able to carry that momentum through the rest of the period. We talked before the game about starting on time and getting a lead.”

The Falcons started to apply pressure as the second period progressed and finally broke through with 6:16 left in the game. Evan Giesler scored it for the Falcons, trying to make a pass out front from behind the net and the puck deflected off Hunter Shepard and over the goal line.

Shephard and the Bulldogs withstood a late desperation surge by Air Force to seal the trip to St. Paul where UMD won its title in 2011.

“We’re going home (to the ‘X’),” Wolff said. “We’ve all played there before. I played in the state tournament there. It’ll be good to be home.” 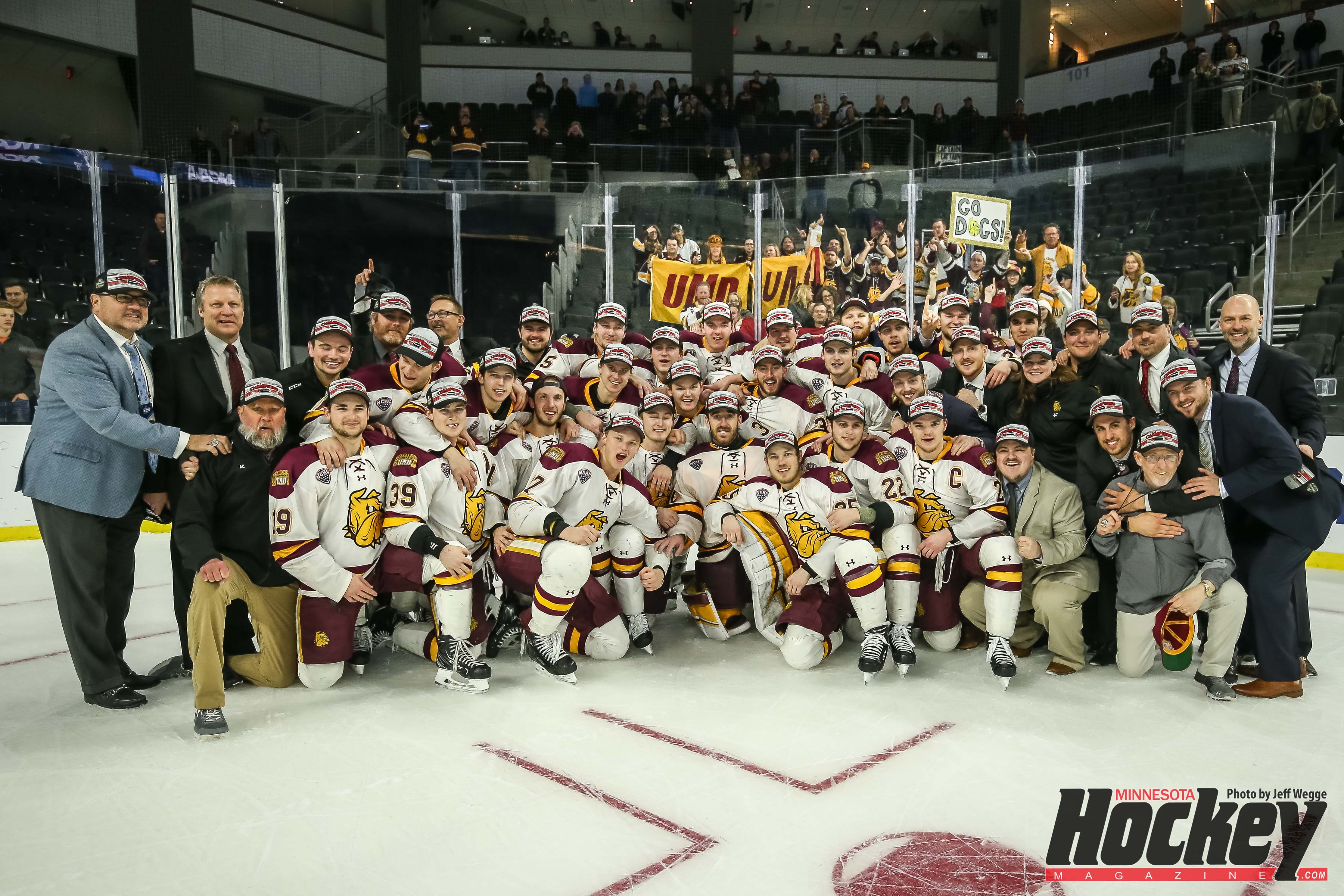