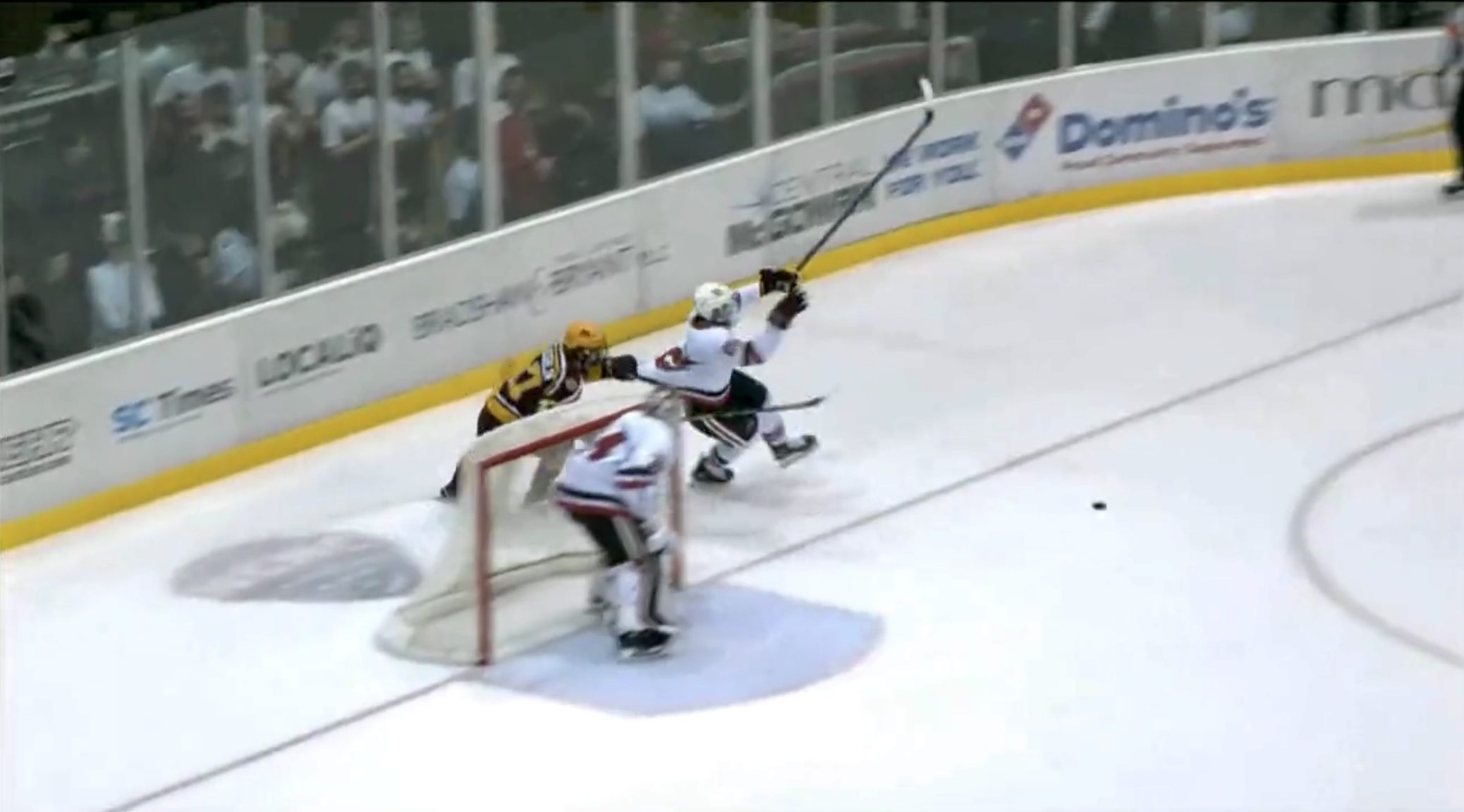 ST. CLOUD — Coach Bob Motzko clearly had not seen a replay when assessing the final moments of his Golden Gopher men’s hockey team’s 4-3 overtime win over St. Cloud State, a program he guided for 13 seasons (2005-2018). “It was a dive at the end,” Motzko said of Husky defenseman Nick Perbix. “Even the kid, he knows he dove.”

The problem is Perbix doesn’t, because he didn’t. Motzko’s triumphant return to the “House that Herbie built” Saturday night did not come without a little outside help.

In the opening moments of overtime, Minnesota’s Blake McLaughlin tugged hard on the back of the puck-carrying Perbix’s sweater, yanking him to the ice just to the left of Husky goaltender David Hrenak. So convinced of his guilt, McLaughlin stopped skating as he passed the NCHC official in the corner who watched the play unfold right in front of him. The Huskies did the same but Sammy Walker did not and once McLaughlin realized he had been spared a penalty, he picked up the loose puck and fed his Gopher co-captain who went in alone on Hrenak, burying the game winner 36 seconds into the extra session. 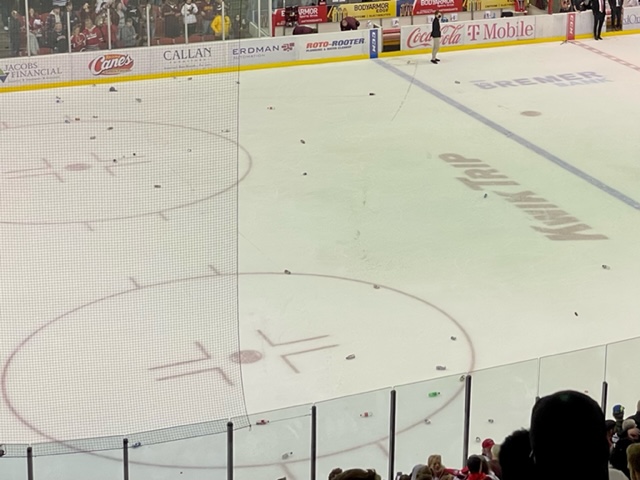 The controversial finish gave No. 4 Minnesota a split in its home-and-home series with No. 2 St. Cloud State and put a damper on SCSU’s homecoming celebration. Motzko improved his record at the Herb Brooks National Hockey Center to 146-73-29 (.647) overall and 1-0-0 on the visiting bench.

“I eventually knew that it was gonna happen, you know; it’s different,” Motzko said of his return. “I have great memories here and then to see a crowd like this and the intensity. I’ve lived through this. This is a special place and … it was special tonight too.”

Considering Motzko’s contribution to the program, his “homecoming” might have been a bittersweet moment for some Husky fans under normal circumstances. However, things turned ugly as the standing-room-only crowd pelted the ice with beer cans, seltzer cans and anything else within its reach.

Amid all of it, players and coaches shook hands while St. Cloud State coach Brett Larson took a detour to berate the official responsible for ignoring the infraction. 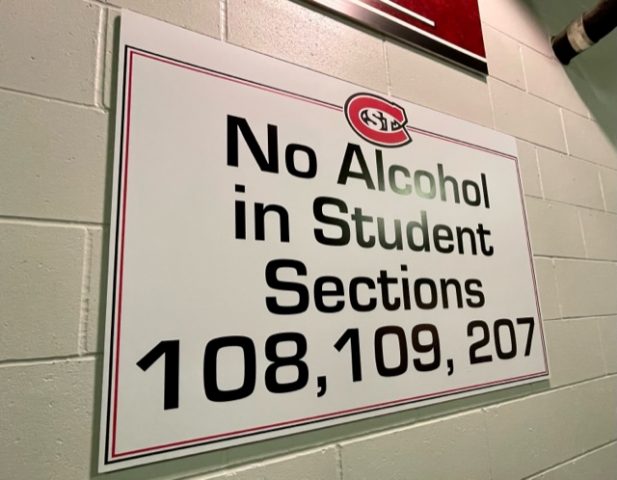 One observer, who I shall not name but it rhymes with Ryan, initially agreed with Motzko immediately after watching it in real time from behind the top row of Section 207, where students absolutely respected the area’s no-alcohol policy without exception.

His first instinct was, and I quote, “Elite dive.”

He even stood across from Motzko as the coach offered his opinion which seemed to confirm what the naked eye witnessed. Moments later, however, his son pulled out his phone and revealed the smoking-gun video proving otherwise and tarnishing his opinion of an otherwise phenomenal night of hockey.

“I’m embarrassed that that happened and that non-call really ruined a great hockey game,” Larson said. “Two teams that I thought played great tonight gave our fans just a treat, a back-and-forth game with two really good hockey teams. Unfortunately, that situation really left a tough taste in our mouth.” 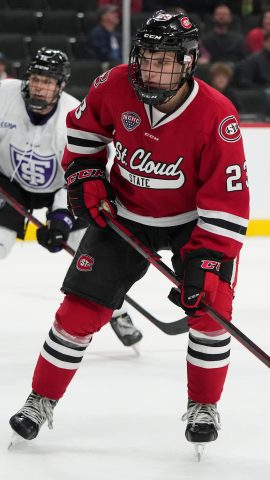 Decked out in retro uniforms resembling those worn in the 1985-86 season, Motzko’s final season playing for SCSU, the Huskies tilted the ice in their favor early on and jumped out to a 1-0 lead near the halfway point of the first period on a fluky goal credited to Sam Hentges. But Minnesota scored twice in the second on goals by Aaron Hulgen and Bryce Brodzinski to give the Gophers a 2-1 lead entering the third.

In a reversal of Friday night’s contest, St. Cloud State wasted no time tying the score on freshman Jack Peart’s first collegiate goal just 19 seconds into the final period. This time, however, it was the Gophers who answered, with Walker quickly restoring the lead.

“We needed to do that,” Motzko said. “I wasn’t happy with a couple of those goals that we gave up, last night, especially. When you get in games like this, you know, with playoff intensity, you are going to make mistakes this early. Sometimes you’ve got to live through those mistakes to get to the other side, a learning experience.

The Gophers were less than five minutes away from a regulation victory but a cross-checking call on Minnesota’s Ben Meyers with 4:16 to go put the Huskies a man up and Nolan Walker tied it just seven seconds later. Motzko felt, at worst, it should have been a 4-on-4 situation.

“It shouldn’t have been in overtime, the guy was hooking Meyers and Meyers retaliated,” Motzko said. “You can’t do that but he let that go. So I felt we deserved to win that game and I know it’s going to be controversial how it played down, but it played the way it was supposed to tonight.”

That’s not exactly how Nolan Walker saw it, especially after his experience in the post-game handshake line.

“Even their own guy came up to everyone and said, ‘That’s horrible. It should have been a penalty,'” SCSU’s Walker said. “So that’s when you know, right there, that we got screwed.”