St Paul United proves it belongs with a trip to the state semifinals. 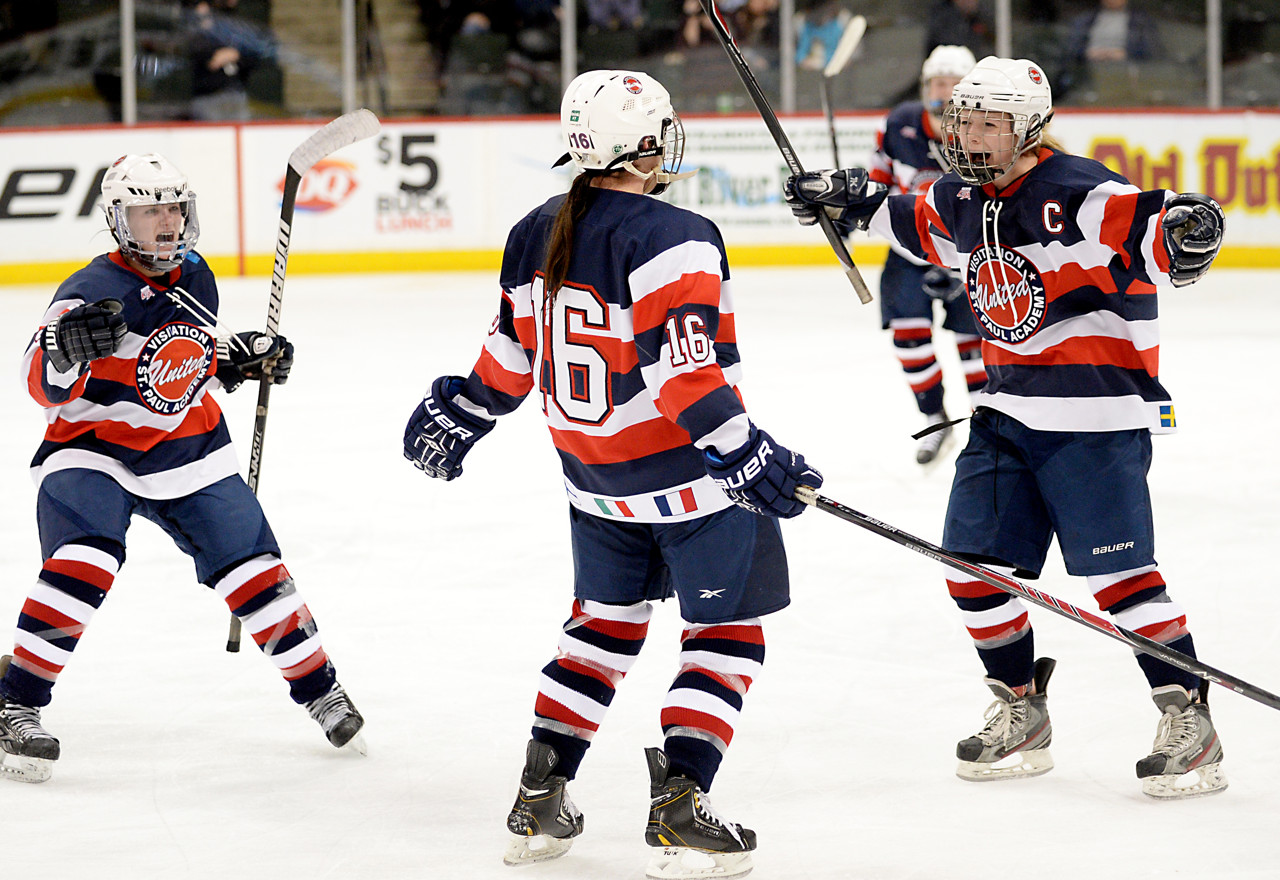 SAINT PAUL—Cinderella hasn’t found her slipper yet, but she’s one step closer. St. Paul United, the only team to advance to the state tournament without playing in a section final, moved on to the Class A state semifinals with a 5-2 victory over Proctor/Hermantown.

With SPU clinging to a 3-2 lead late in the final period, defenseman Kate Hallett, a Harvard University commit, fired a shot from the right point which hit traffic in front and eluded Mirage goaltender Kylie Hommerding at 13:53. Joie Phelps’ second of the game, an empty-net goal with 3:24 to play, sealed the win and earned St. Paul United a date with East Grand Forks at 1:00 p.m. on Friday with a trip to the state championship game on the line.

The Green Wave defeated Litchfield/Dassel-Cokato 8-1 earlier in the evening.

St. Paul United, a cooperative team between Visitation, St. Paul Academy and Summit School, made its state tournament debut less than a week after Achiever Academy withdrew from the Section 4A title game following allegations of its roster containing ineligible players.

“It’s great to get on the ice,” St. Paul United coach David Cole said of his team’s eight-day layoff from game action. “To be off a little bit of time was not a bad thing necessarily for us. We’ve been a bit banged up, and we were healthy again tonight. Everybody was back in the lineup and we needed everybody because that was a heck of a hockey game and the Mirage gave us everything we could handle.”

Despite efforts by fellow section members to have the tournament re-seeded and repeated, SPU found itself under the bright lights of Xcel Energy Center facing the Mirage on Wednesday in the last quarterfinal of the day. The experience left the nickname-free team feeling as if it had something to prove, and prove something it did.

“Regardless of how we got here, I knew we were going to get here,” Hallet said. “We’re just going to continue to prove ourselves because we truly, truly deserve to be here and I believe that with my whole heart.”

After Lauren Boettcher got SPU on the board in the first, Lea Groebe scored at 10:34 of the second to put SPU in front 2-0 past the midway point of the game. Just 2:17 later, however, Proctor/Hermantown’s Sophie McGovern briefly closed the gap to one before Phelps restored the two-goal cushion at the 15:20 mark.

Cole said he could sense his team was a bit tentative to begin the game with nerves, understandably, getting the better of his players considering the environment.

“Once we started to skate and pressure them and use our forecheck, I think the tide started to turn,” Cole said. “Then we just stayed on the gas.”

The Mirage made it interesting on Mikayla Kero’s tally just 4:51 of the third to make it 3-2 but it would be the only one of 13 shots Proctor/Hermantown fired at SPU goalie Catherine Johnson in the game’s final 17 minutes. Johnson finished with 24 saves overall.