The Wild must at least contain Nathan MacKinnon and company to get back in the series at home. 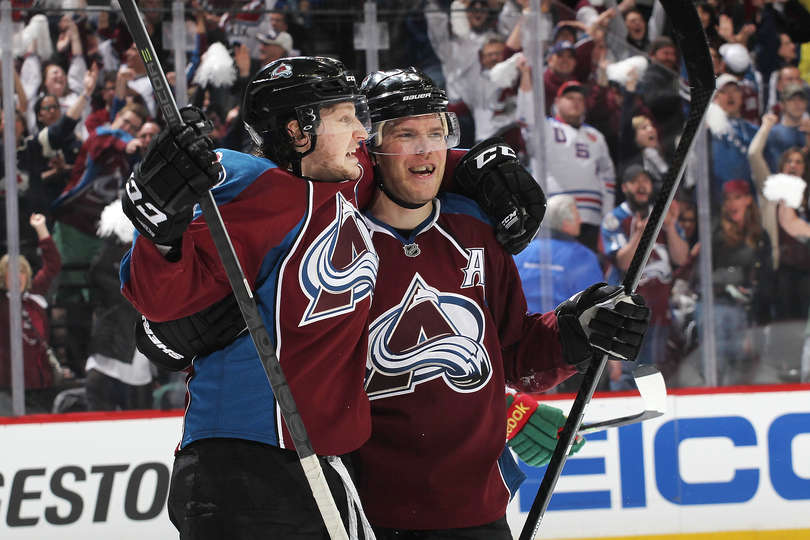 Nathan MacKinnon #29 and Paul Stastny #26 of the Colorado Avalanche celebrate an open net goal late in the third period against the Minnesota Wild in Game Two of the First Round of the 2014 Stanley Cup Playoffs at the Pepsi Center on April 19, 2014 in Denver, Colorado. The Avalanche defeated the Wild 4-2. (Photo by Michael Martin/NHLI via Getty Images)

The Wild must at least contain Nathan MacKinnon and company to get back in the series at home.

Ten months ago the Colorado Avalanche were faced with the most delicious dilemma a National Hockey League team could have thrust upon them. Seated at a table in Newark’s Prudential Center on June 30, the Avs brass had their choice of any draft-declared prospect on the planet as possessor’s of the No. 1 overall pick in the 2013 NHL Draft.

The Avalanche, at least in the short term, made the right decision.

Jones is sitting at home after a respectable 25-point season—to go with a minus-23 plus/minus rating—for the Nashville Predators, a non-playoff team. MacKinnon, on the other hand, is destroying Minnesota with seven points (1-6–7) and is a plus-5 in leading Colorado to a 2-0 lead in its first-round Stanley Cup Playoff series against the Wild.

MacKinnon notched a goal and three assists on Saturday night in the Avs 4-2 win over the Wild in game two after a three assist performance in the series opener. His combination of speed, skill, and rink awareness has given Minnesota fits in the Mile-High City this week.

Through two playoff games MacKinnon has already accumulated one ninth of his 82-game regular season numbers (24-39–63). But he is far from doing it alone.

The chemistry between MacKinnon and linemates Gabriel Landeskog and Paul Stastny was explosive throughout the night, repeatedly pinning the Wild deep in their zone with power-play efficiency at even strength. The trio combined for a pair of pretty Landeskog goals in the second period, each set up by spot on behind-the-back passes, first by MacKinnon then by Stastny and Colorado led 3-1 after 40 minutes.

“Whether you score or not, you can still create momentum down in their zone and making sure we’re not in our end,” Landeskog said. “My line certainly made some nice plays tonight.”

“That line was on fire tonight, they played really well,” Colorado coach Patrick Roy said. “Landy (Landeskog), Pauly (Stastny) and Nate, they had an outstanding game.”

Wild starting goaltender Ilya Bryzgalov, although helpless on both plays, was mercifully lifted by coach Mike Yeo after Landeskog’s second goal at 11:59 after allowing three goals on 14 shots. He was replaced by Darcy Keumper who stepped onto game ice for the first time since March 27 and stopped all 14 shots he faced the rest of the way.

But if his teammates can’t find a way to limit the MacKinnon line’s speed on the rush and take away its space, Kuemper could channel his inner Patrick Roy and even that couldn’t earn the Wild a return trip to Denver. The three head to Minnesota for Monday’s third game having compiled an astounding 17 points (6-10–17) in just two games.

Is that sustainable? So far, the Wild have yet to demonstrate it isn’t but they said the right things after the game.

“For me, I think you see, we’re backing up a little bit too much as far as I’m concerned right now,” Minnesota coach Mike Yeo said. “We’re allowing them to build speed, so we’ve got to do a better job.”

“We are going to have to be harder on them and be a little more physical on them, take away time and space and you know, we didn’t do as great a job as we wanted to tonight,” Wild defenseman Marco Scandella said. “I feel like they are getting a lot of speed in the neutral zone and we got to find a way to slow it down.”

Minnesota was the beneficiary of an early power play just 1:07 in when Colorado’s Cody McLeod took a run at Jonas Brodin long after the Wild defenseman released the puck. Despite buzzing the Avalanche net for nearly the full two minutes, the Wild came up empty on four shots and had at least that many blocked.

But just 1:11 after McLeod was released, Wild captain Mikko Koivu busted up the left wing boards and into the Colorado zone before feeding the puck to the crease where it deflected off the net-crashing Charlie Coyle behind Avalanche goaltender Semyon Varlamov for a 1-0 Minnesota lead. Varlamov finished with 30 saves on the night.

Coyle’s goal gave the Wild a 7-2 lead in shots on goal through just 4:18 of play but Minnesota’s grip on the game began to loosen shortly thereafter.

The Avs bounced pack two minutes later on an eye-opening goal by MacKinnon.  The 18-year-old Halifax, Nova Scotia native flew into Wild zone and took Minnesota defenseman Jared Spurgeon out of his skates with a nifty lateral fake and ripped a wrist shot past Bryzgalov’s blocker to knot the game at 1-1.

“I wanted to kind of shake to the middle and I kind of jumped to the outside,” MacKinnon said. “I didn’t know I’d have that much room. Obviously, I’m pretty fortunate that he bit on it I guess and I just fired it at the net and it went in.”

“I thought, after they scored their first goal, that certainly gave them momentum and I thought that we got on our heels a little bit from that time,” Yeo said.

Eleven seconds after Ryan Suter was assessed a cross checking penalty with 1:30 to play, Minnesota drew within one when Scandella jumped into the rush and rerouted a Koivu pass between Varmalov’s legs. The shorthanded goal is the sixth such tally in Wild history.

But Colorado sealed its win with 15 seconds on the clock and, fittingly, it was Stastny depositing the puck into an empty net after receiving it from MacKinnon who could have put the puck away himself just as easily as he appears to be putting away the Wild’s season.