UPDATED: A Diamond in the Rough? 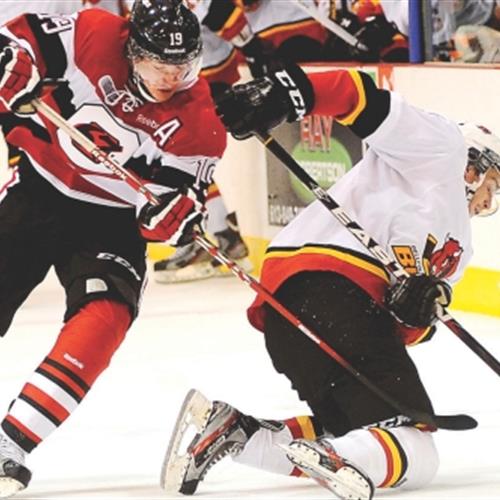 Drafted in the seventh round in 2011 by the Wild as a defensive specialist, Tyler Graovac is proving this year to be one of the top two-way players in the Ontario Hockey League.

OTTAWA, Ontario — Since their inception in 2000, only two Minnesota Wild players (Derek Boogaard and Lubomir Sekeras) drafted in the seventh round or later have appeared in over 200 games with the club. So when the Wild took a flyer on the Ottawa 67’s Tyler Graovac with their final selection of the 2011 Entry Draft, not much was expected.

The lanky 6-foot-3, 179-pounder was drafted for his strong defensive abilities as a shut-down checking center. Graovac’s downfall was his inability to the light the lamp, especially after only notching 20 goals in first three Ontario Hockey League. However, after tallying 18 goals in his first 26 games this season, the Wild are hoping that they may have found a diamond in the rough.

Graovac’s scoring exploits did not go unnoticed as he was selected to participate in the junior loop’s Super Series versus Russia. The 19-year-old netted a short-handed marker in two games against a club that featured the No. 1 pick in the 2012 NHL Entry Draft, Nail Yakupov.

Perhaps Graovac’s greatest achievement this season was his surprise invitation to Canada’s World Junior Selection Camp, especially after being sidelined for three weeks prior due to a nagging groin injury.

While the Brampton, Ontario native was cut early on in the process, the competition for spots was fierce. Wild 2012 first-rounder Matthew Dumba was also among the many that failed to make the final roster.

Graovac’s success early in the campaign can be attributed to his hard work off the ice.

The fourth-year player has grown an inch and gained 25 pounds since being selected 191st in 2011. His new-found frame has made Graovac a force to be reckoned with, especially down low, where opposing defensemen have had their troubles clearing his strong-body from in front of their net. Graovac subscribes to the old adage “that good things will come to those who work hard.”

The Grade 12 student also combines brains with his brawn. Having being awarded the club’s academic award for October, Graovac’s hockey sense allows him to be the 67’s top penalty-killer on most nights.

Unfortunately, Graovac’s personal gains haven’t been fortuitous for his club. The 67’s are mired in a dog fight to remain out of the Eastern Conference cellar. With the Jan. 10 trade deadline on the horizon, one will expect Graovac to be moved for futures in his final year of junior hockey.

*(UPDATED JAN. 5) — In the midst of his most prolific season junior hockey, the Ottawa 67’s have traded Minnesota Wild prospect Tyler Graovac to the Belleville Bulls. Graovac led the 67’s in goals with 21 despite missing nine games due to an injured groin. The seventh round pick in 2011 will now join Canadian World Junior goaltender Malcolm Subban’s Bulls who are currently in second place in the Ontario Hockey League’s Eastern Conference.

Trade winds had been blowing for the past few weeks for the 67’s as they have had a disappointing start to their season with just 11 victories in 36 games. With Graovac having a dominant season and in his last year of junior eligibility, it was no surprise that the 19 year-old was moved.

Having already been rewarded this season with an all star berth and an invitation to Canada’s World Junior Selection Camp, Graovac should now be able to add the 2012-13 OHL playoffs to his growing list of highlights.