Upon (Much) Further Review … 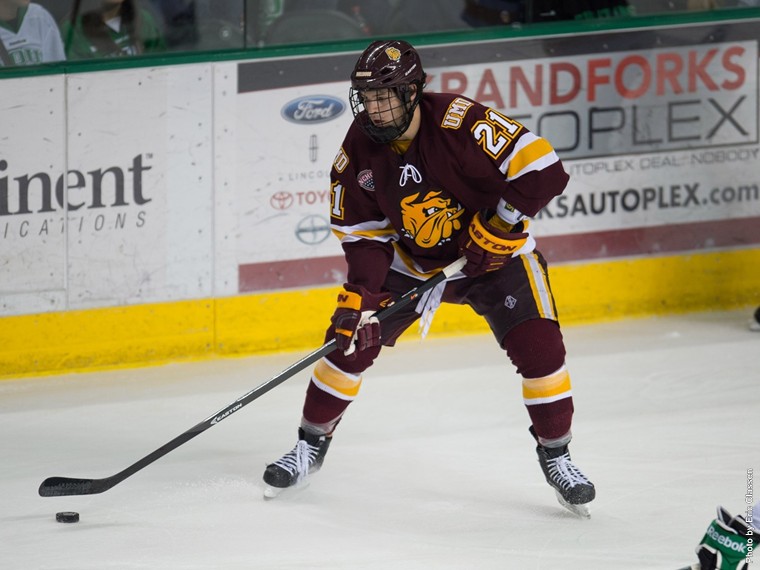 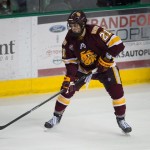 Grand Forks, ND—The Minnesota-Duluth Bulldogs came back from a two-goal third-period deficit to tie North Dakota before UND pulled out a 4-2 win on Friday.

It did not come without controversy, however.

North Dakota’s Michael Parks’ wrap-around shot just 37 seconds into the third period was judged to have not gone in and play continued. A brief review after the next whistle resulted in an initial ruling of no goal but, after a short discussion at the North Dakota bench, referees Derek Shepherd and CJ Beaurline spent nearly ten minutes on a second review and ultimately reversed their decision much to the delight of the anxiously-waiting sellout crowd of 11,810.

And much to the chagrin of the Minnesota-Duluth bench.

Not surprisingly, the view from the North Dakota bench slightly differed from that of UMD’s.

“[The officials] were patient in going back and looking for the video,” North Dakota head coach, Dave Hakstol, says. “I’m not sure if it was available right away. Bottom line, you want to get the call right and that was the right call.”

In a tough, hard-hitting game the Bulldogs were lead by freshman sensation, and leading point scorer, Alex Iafallo and his two point game. This was a homecoming for him as he returned to North Dakota after last season playing just an hour south for the Fargo Force of the USHL where he accumulated 43 points in 50 regular season games.

North Dakota took a 1-0 lead at 17:59 of the game when their scoring leader, Rocco Grimaldi, was able to tap in a rebound of defenseman Dillion Simpson’s shot off a clean face-off win by Jordan Schmaltz. The power-play goal came after a scrum in front of the Duluth net that lead to coincidental penalties with North Dakota already on the power play. This was indicative of the physical nature of game that included a total of 18 penalties.

With the Bulldogs down 2-0 Iafallo took it upon his shoulders to get UMD back into the game when he tallied their first goal at 6:37 of the third with a shot from the left hash mark catching North Dakota goaltender, Clarke Saunders, out of the net. Just 20 seconds later, with Schmaltz in the penalty box for an interference call, Iafallo added to the Bulldogs’ momentum when he assisted on Adam Krause’s goal to knot the game at 2-2.

“It was a tough way to give away a two-goal lead, but I liked our response,” Hakstol said.

Minnesota-Duluth continued to put pressure on North Dakota but Saunders, who stopped 34 UMD shots on the night, came up big. After watching the Bulldogs tie the game from the penalty box Schmaltz was able to redeem himself by scoring the eventual game-winning goal at 10:05 of the third period. His power-play blast from the point made its way through a screen and behind UMD goalie, Aaron Crandall, who finished with 19 saves.

“The power play was just sticking with it. It recovered several pucks and we kept the puck in the zone for a long time and finally Jordan found a line to get it through,” Hakstol said. “We had good net front traffic.”

Minnesota-Duluth came into the series with a league-leading the penalty kill of 93.6 percent but North Dakota managed two crucial goals on six power-play attempts.

“They got a couple power-play goals which ended up really being the difference,” Sandelin said. We took a couple undisciplined penalties in the third period when we got back to tie the game and that was the difference in the game. That is how fine a line it is.”

No. 20 Minnesota-Duluth will take on No.13 North Dakota again Saturday night at the Ralph Engelstad Arena for a chance to split the series.