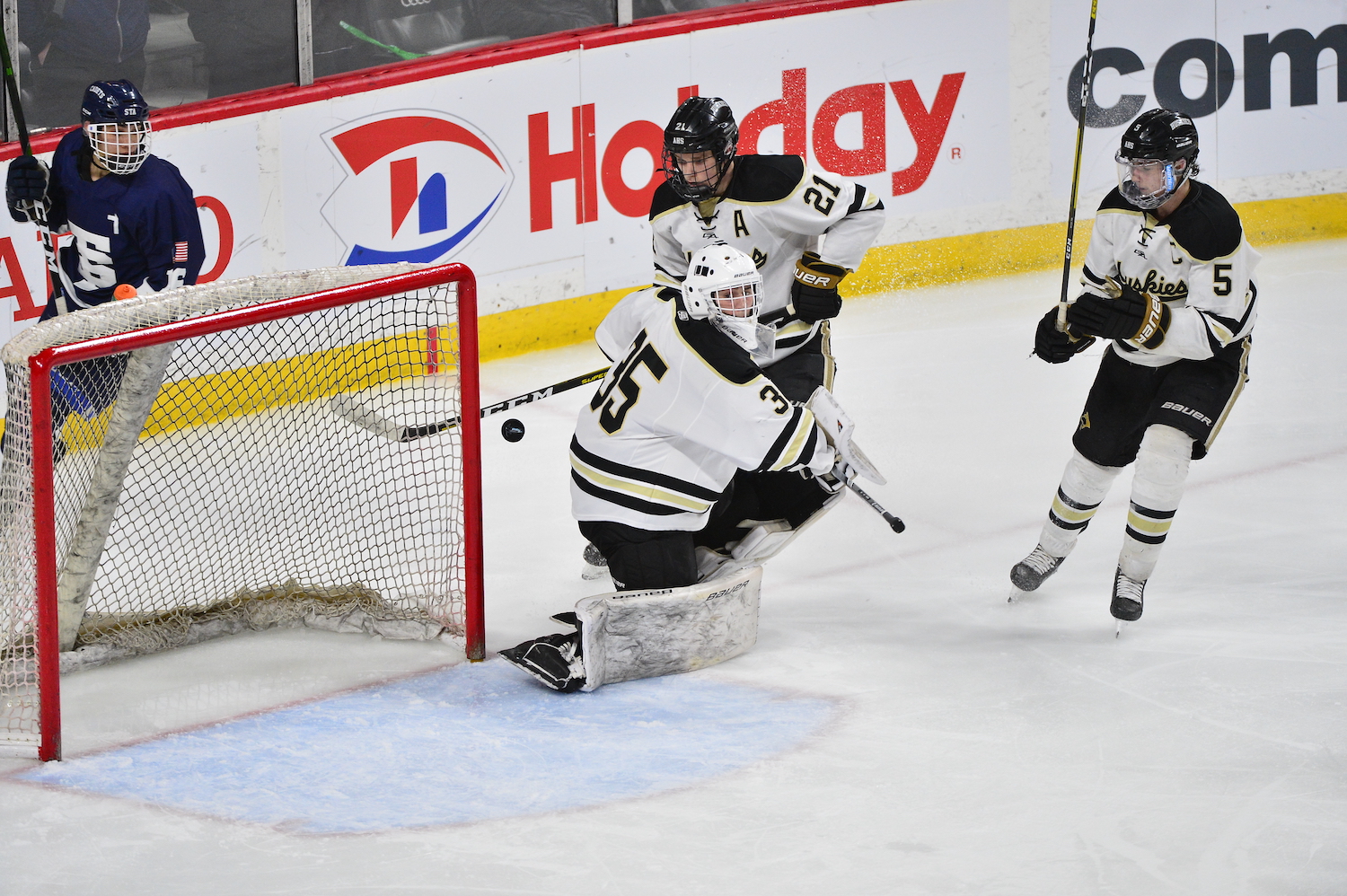 St. Thomas Academy's Jared Wright watches the puck he shot drop behind Andover goaltender Will Larson on its way to crossing the goal line. The early second-period goal would stand up as the game winner in unseeded STA's 3-2 Class 2A quarterfinal win over top-seeded Andover on Thursday night at Xcel Energy Center. (Photo: Tim Kolehmainen / Breakdown Sports USA)

SAINT PAUL – The first upset of the boys’ hockey tournament was a big one.

Unseeded St. Thomas Academy took out top-seeded Andover with a 3-2 victory in the first game of the evening Class 2A quarterfinals.

The Cadets used a couple of quick goals in the second period to take a lead they would never give up. Plus, they got 33 saves from senior goaltender Tommy Aitken, including surviving getting outshot by a 15-3 margin in the third period.

“For us, it’s hard when you hit a good goalie,” said Andover senior Gunnar Thoreson. “We had around 35 shots and to only get two on him, it’s tough.

The Huskies, making their inaugural state tournament appearance, scored first with Thoreson netting his 17th of the season at the 12:20 mark of the first period. The lead didn’t last long though, as a point shot from St. Thomas Academy’s Noah Rauschenberger caught a deflection from an Andover player on its way to the net and tied the game 1-1 only 37 seconds later.

Andover took the lead again with a snipe shot from Hunter Jones 30 seconds into the second period. But the Cadets responded 1 minute, 43 seconds later on a power-play goal from Will Soderling.

Then the Cadets took their first lead another 1 minute, 42 seconds after that. Jarod Wright shot the puck that bounced off the Andover goaltender and into the net for the 3-2 lead. That lead held up and carried the Cadets into the semifinals. 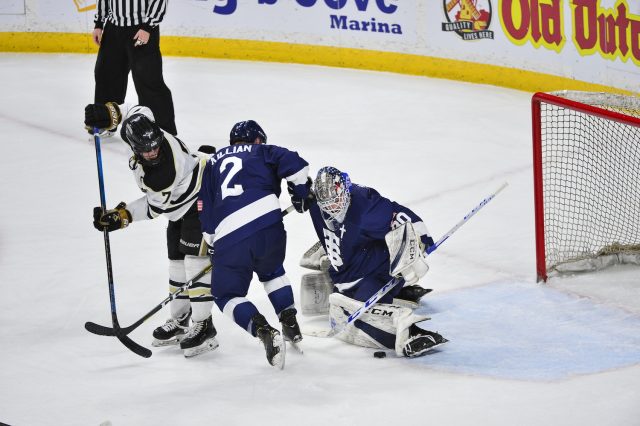 STA goalie Tommy Aitken made one of his 33 saves in the Cadets’ Class 2A quarterfinal win over Andover on Thursday night at Xcel Energy Center. (Photo: Tim Kolehmainen / Breakdown Sports USA)

The Huskies spent most of the third period in the offensive zone, shooting, crashing the net, trying to find the equalizer that didn’t happen.

“We had plenty of chances that could’ve been that bounce to get the tying goal,” Thoreson said. “I thought one of them was going to come.”

As far as the upset, Andover coach Mark Manney talked about how good the teams are in the tournament this year, leaving a “wide-open” field.

But did he ever envision his team would go down in the quarterfinals as the top seed?

“The scenario did run through my head,” Manney said. “I’ve got to admit, it didn’t want to stay there long. I thought we’d come down here and play pretty well and get a couple of wins to start the weekend.”

The upset continued a solid run for St. Thomas Academy, one it’s been on since about mid-January.

The Cadets have already had quite the road into the state semifinals. It came into the Section 3 tournament as a 5-seed and promptly knocked off top-seeded Rosemount before sending 2-seed Burnsville home in the section championship. Now, the upset of the state’s top-ranked team in Andover.

All this from a team that was 5-7-2 in early January. It was during that time that the team had a meeting of the minds.

“We went over to one of the guys’ houses, and we just talked everything out,” Aitken said. “We decided to buy in. I think that’s what changed everything around, really, was just deciding to buy in and play for each other.”

From there, the Cadets have rattled off wins in 14-of-15 games.

The script is also flipped for Andover. Instead of an Andover-Moorhead semifinal matchup, both had hoped for, they’ll meet in the consolation bracket. Manney is a Moorhead native.

The last Class 2A quarterfinal of the night was technically another upset, although it was the 5-seed Hill-Murray beating 4-seed Moorhead.

The Pioneers defeated the Spuds 5-1, using three second-period goals to separate itself. It was a fun game to play, said Pioneers sophomore Nick Pierre.

“I think the boys did a good job together as a unit,” Pierre said.

Hill-Murray took a 2-0 lead into the first intermission, getting on the board early with Charlie Strobel’s 24th of the season coming 3 minutes, 45 seconds into the game. Pierre added the first of his two goals a few minutes later; he has 25 goals this season.

The Spuds cut the deficit to one on the power play early in the second period, with Luke Gramer getting the tally on a high shot from the point. It just wasn’t enough.

“Ultimately, from start to finish, they were the better team,” said Moorhead coach Jon Ammerman. “A disappointing result.” 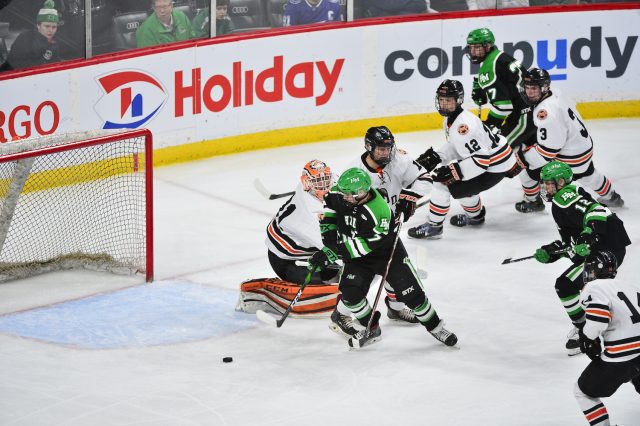 Hill-Murray’s speedy Nick Pierre beats everyone to a loose puck before notching his second goal of the game early in the second period of the Pioneers’ 5-1 Class 2A quarterfinal win over Moorhead Thursday night at Xcel Energy Center. (Photo: Tim Kolehmainen / Breakdown Sports USA)

But Hill-Murray grabbed the two-goal lead back 1:12 later on Pierre’s second of the game. Grabbing the larger lead back from the Spuds helped give the Pioneers confidence, Pierre said.

“It was good to come back with that wave,” Pierre said.

Junior Jared Jensen really put the game out of reach with a pair of goals in 14 seconds later in the period to push the margin to 5-1. He got in alone for his second goal, shot the puck up high and it went off the goaltender’s behind and into the net.

The speed of Hill-Murray was just too much for Moorhead to counter.

“We didn’t do much to slow them down,” Gramer said.

It was a rematch of the regular-season finale between these two teams, a game Hill-Murray also won, 4-3, up in Moorhead. That was a back-and-forth game though, different than a 5-1 score through two periods.

“I thought we played hard and capitalized on our opportunities,” said Hill-Murray coach Bill Lechner.

Hill-Murray will face the Cadets in the semifinals. St. Thomas Academy’s last loss came against Hill-Murray, 3-2 on Jan. 30.

“It’ll be a battle,” Lechner said.