Vanek bringing offense to the Wild

Thomas Vanek is back in the goal scoring business 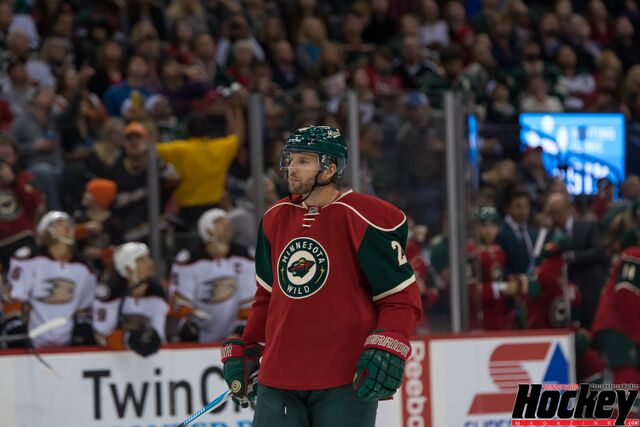 Thomas Vanek is back in the goal scoring business

Saint Paul – As a Minnesota power play expired in the second period Saturday evening, Thomas Vanek held the puck near the outside of the right faceoff circle and appeared to be looking for someone to get open in front of the net.

So Vanek, who became something of a fans’ whipping boy a year ago when his numbers were less than gaudy during his first Wild season, teed up the puck and rifled a bullseye over the left shoulder of Anaheim Ducks goaltender Frederick Andersen.

“I had a little time there and I was looking for something, someone to pass it to,” Vanek said.

“I just went for it and it worked out perfect,” he said.

It was a true goal-scorer’s goal and pretty much what Minnesota fans expected from the former Gophers star last season, when Vanek was beset by injuries and struggled to stitch together a total of 21 goals.

This goal gave the Wild a 2-0 lead en route to a 3-0 victory over the struggling Ducks Saturday in front of 19,034 at the Xcel Energy Center, and it gave Vanek four goals in seven games this season and 302 goals in his career.

It might have been five and 303, but he had a goal taken away in the home opener against St. Louis when officials ruled the puck caromed into the net off linemate Charlie Coyle.

Vanek seemed unfazed by that decision, emphasizing later that it counted as a goal no matter who last touched it.

But the 31-year-old Austrian who led the Gophers to the 2003 NCAA title knows why the Wild signed him as a free agent in 2014 and what the fans expect.

Never the fastest skater in the building, the 6-foot-2, 218-pounder looks like a different player this season. He’s well on his way to his 11th consecutive 20-goal season because he’s healthy.

“Healthy,” he repeated Saturday. “A lot of guys play hurt, and I play hurt, too. Right now I’m not, and it’s good to be out there not lagging my leg behind. It feels nice.”

A year ago, hobbled by groin problems, the puck wasn’t going in for Vanek. He did not score his first goal of the season until his 10th game, got his fourth goal in Minnesota’s 29th game and seemed perfectly content to dish the puck to someone else.

Would he have shot in the second period a year ago?

“I love the fact that he’s shooting more pucks,” Wild coach Mike Yeo said. “Obviously, he’s got a great shot. I don’t know that he was taking those shots last year.”

Yeo says he sees a different Vanek this season, but not just because goals are coming.

“Him getting goals is one thing, but to me it’s as much about how he’s playing without the puck. He’s digging in to the system; he’s digging in defensively. When a player’s doing that stuff, obviously you’re real pleased that he gets rewarded for it,” Yeo explained.

Vanek said he felt zero pressure coming back a year ago to where he starred in college, but he’s definitely more comfortable in his second season with the Wild.

Knowing all the players, the coaches and the equipment staff from the start has allowed him to feel more at home, however.

But he’s not satisfied.

Matt Dumba scored his first goal of the season late in the first period to get the Wild offense started, then displayed a major-league celebration. Ryan Carter’s short-handed goal late in the second period capped the goal-scoring, and Devan Dubnyk made 15 saves to record his first shutout of the season.

Anaheim, which took five of the game’s six penalties and hobbled away from the X with a 1-5-1 mark, recorded its lone victory against Minnesota a week ago. The turnabout on Saturday left the Wild with a terrific 5-1-1 record going into a Sunday game at Winnipeg.

Vanek will be there, looking to extend a two-game goal streak.