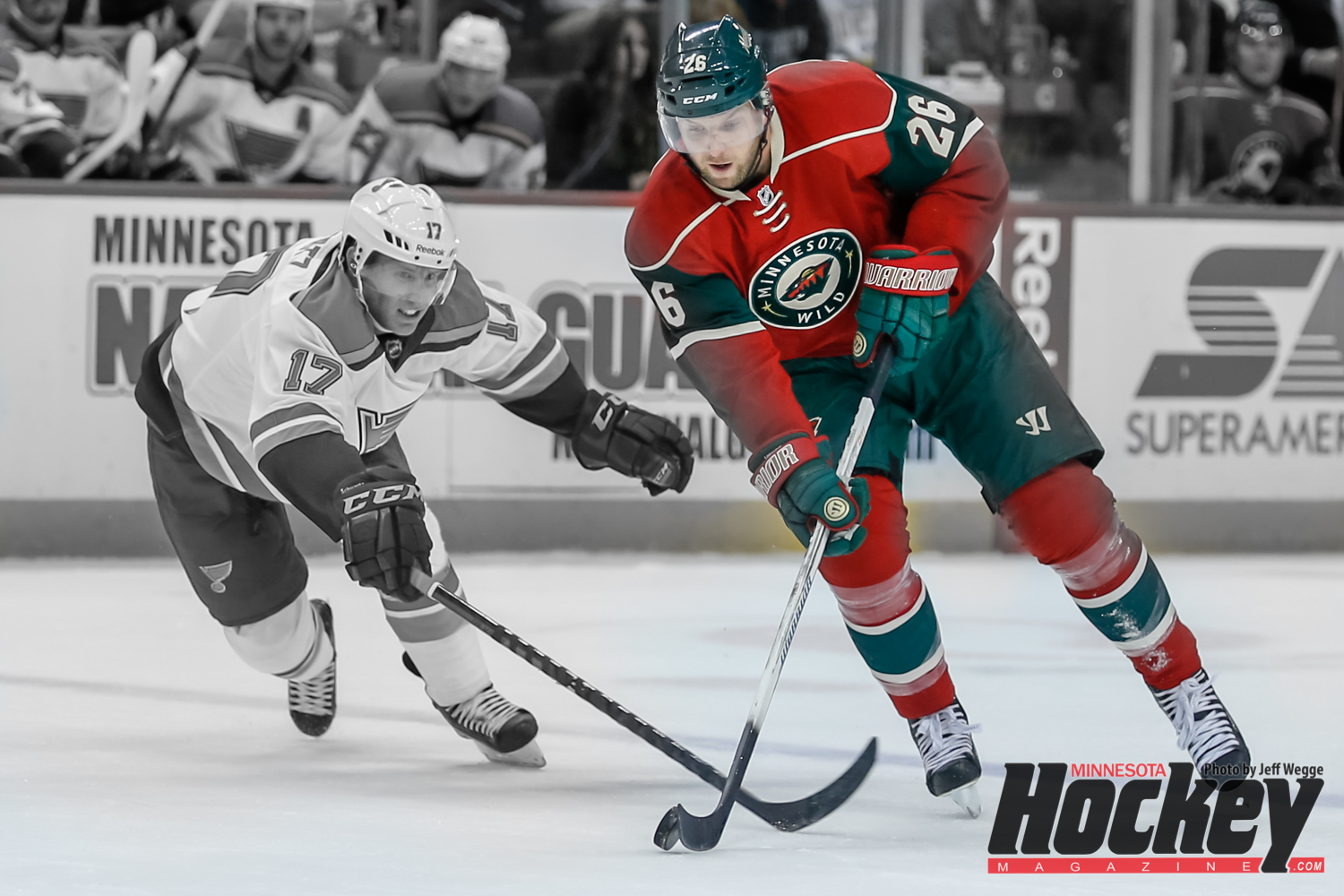 ST. PAUL – The Thomas Vanek everyone hoped would sign with the Wild two summers ago and the one who played for Minnesota last season seemed to be different people.

He required 11 games before recording his first goal, but the former high-scoring Gophers winger hung in there and picked up 21 goals. Trouble was, he simply couldn’t skate because of groin problems and a sports hernia.

“He’s a huge weapon for us no matter where he’s playing,” Wild coach Mike Yeo said.

A player who twice scored 40 goals for the Buffalo Sabres, Vanek potted his fifth and sixth of the season Tuesday night to propel the Wild to a 5-3 victory over the Winnipeg Jets in front of 19,153 at the Xcel Energy Center.

His goals – his first on the kind of breakaway slap shot Brian Rolston became known for and his second five minutes later on a toe-drag move that turned defender Paul Postma inside out – were both highlight reel efforts.

Minnesota was missing injured Zach Parise and Justin Fontaine up front plus defender Marco Scandella, who was out for personal reasons, but the Wild took this game over with four unanswered goals in the second period to climb in front 5-1.

It began with Vanek corralling a breakaway pass from Christian Folin and blasting a shot past Jets goaltender Ondrej Pavelec at the 4:30 mark of the period, Vanek scalding the net with a rocket from between the circles to break a 1-1 tie.

“It’s a shot I feel I can hit pretty good,” Vanek explained. “Again, coming in from somewhat on the right, the middle, I feel I’m pretty good at hitting that spot, so I went for it.”

In practice, Folin said with a smile, “He does that every day.”

The Wild went short-handed a minute later, but Erik Haula immediately got loose for a breakaway and beat Pavelec to make it 3-1. It went to 4-1 when Vanek broke in and made the kind of move fans expected before he signed two summers ago as a free agent, dipping his shoulder and darting past Postma before burying his sixth goal of the season. He brought the puck along by slipping it from behind through his own legs before picking it up and tallying.

“I saw it was kind of a one-on-one opportunity,” he said. “I had pretty good speed through the neutral zone, so I just tried something and it obviously worked out well.”

Things are obviously working out well for the Wild, who completed a three-game homestand with a 2-1 record to raise their overall record to 9-3-2 despite missing a few key players.

“Obviously it’s going to hurt having Zach out,” Vanek said, “but at the same time, we’re good. I think we’re deep.”

Part of the scoring depth comes via Vanek’s production, especially because Jason Pominville has zero goals so far and Mikael Granlund just one. Yeo moved Vanek from a line with Haula and Jordan Schroeder to the line with Pominville and Granlund to begin the second period and the new combination clicked.

“I felt we needed to make a switch; I felt that Thomas was giving us the opportunity (to win),” Yeo said.

Vanek, still as modest as he was 13 seasons ago as a Gophers freshman, had a different take on it, noting that goalie Devan Dubnyk supplied the big saves in the first period and after that the Wild skaters got their legs under them.

No one did that better than Vanek, however, who with two good legs is demonstrating he still knows how to drive the net and score goals the way he did in Buffalo.

He’s having fun, too, he said.

“I feel good about my game,” he said. “This whole game, sometimes I think we take it too serious. We’ve got to have fun. Obviously you’ve got to work hard with it, but overall I think when guys like coming to the rink like this team, good things can happen.”